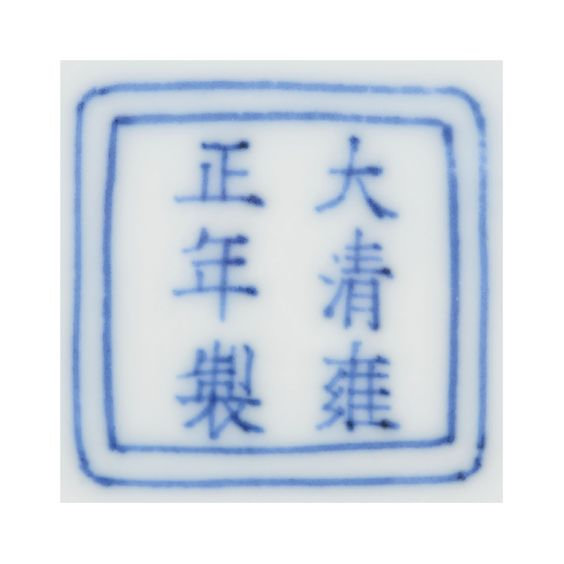 With rounded sides rising from a tapering foot, the dish is covered in a thin translucent pale green glaze stopping neatly around the foot. The vase is finely potted with rounded shoulders below a short neck and slightly flared mouth, applied to the exterior with a blue glaze of bright, even tone. The interior and base are covered with a transparent glaze.

Property From The Zhuyuetang Collection.

Note: It is rare to find a cobalt blue-glazed vase of this form with a Yongzheng mark. Monochrome blue-glazed vases of this shape and glaze are more commonly found with Qianlong marks. Compare to two Qianlong vases, the first of a slightly larger size from the Shorenstein Collection was sold at Christie’s Hong Kong, 1 December 2010, lot 2971; and the other was sold at Christie's Hong Kong, 27 November 2007, lot 1722.

The rich cobalt blue seen on the current vase is sometimes referred to as 'sacrificial blue'. This name derives from the use of vessels bearing this coloured glaze during sacrifices at the Imperial Altar of Heaven in the Ming dynasty. The bowl is well-potted rising form a tall spreading foot to a flared rim and covered on the exterior of both the bowl and stem with a red glaze. The interior is covered in a transparent glaze and the underglaze-blue mark is written in a line on the interior of the stem foot.

Exhibited: Art Museum, The Chinese University of Hong Kong, Shimmering Colours: Monochromes of the Yuan to Qing Periods The Zhuyuetang Collection, 2005, no. 42. The pear-shaped body of rounded rectangular section is raised on a moulded pedestal foot pierced with a narrow rectangular aperture on each of the narrow sides, with a double bowstring band encircling the upper body and another on the neck below the pair of tubular handles, covered overall with a pale grey-blue glaze suffused with dark and light brown crackles.

Similar Yongzheng-marked examples are known, including one sold at Christie’s Hong Kong, 26 April 2004, lot 946, and another sold at Sotheby’s Hong Kong, 23 October 2005, lot 319. Compare also to a Yongzheng-marked Ge-type glazed variant in the National Palace Museum, Taipei, illustrated in Catalogue of the Special Exhibition of Kang-his, Yung-cheng and Chien-lung Porcelain Ware from the Ching Dynasty in the National Palace Museum, Taipei, 1986, no. 63.