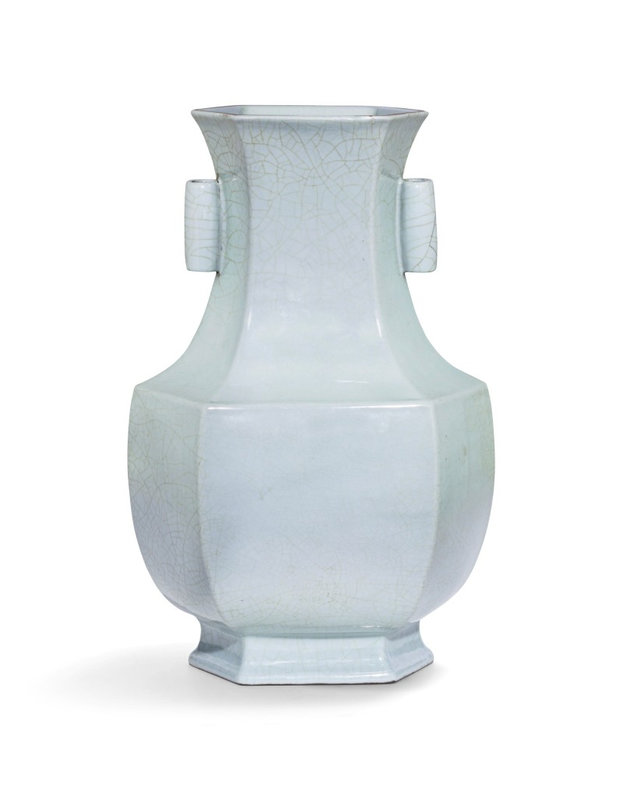 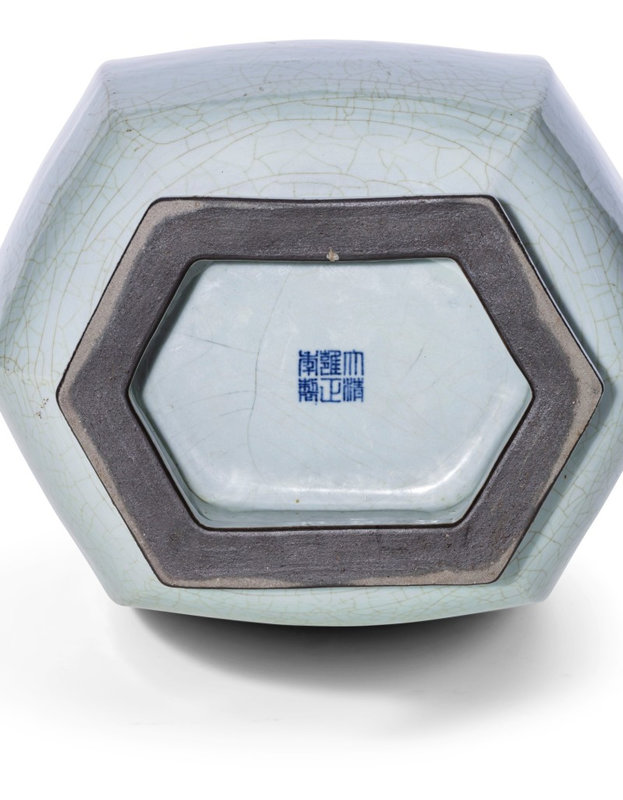 of hexagonal section, the faceted baluster body sitting on a splayed foot and rising to a waisted neck flanked by a pair of tubular handles, applied overall with an attractive greyish-blue glaze suffused with a network of fine crackles, saved for the footrim left unglazed and dressed in a brown wash, the countersunk base inscribed with the six-character seal mark in underglaze-blue.

Note: A great connoisseur of antique porcelains and with a discerning aesthetic sense for works of art, the Yongzheng Emperor demanded the highest level of craftsmanship in the production of elegant and finely manufactured implements for personal enjoyment. Monochrome vessels required the great skill and precision in every stage of their production, from the purity of the clay and precision of the potting to the evenness of the glaze and control of the firing. The slightest irregularity would result in the rejection and destruction of the piece, thus pushing the craftsmen to the limits of their abilities, particularly in the production of large vessels such as the present. The subtle glaze has been created in imitation of the guan [official] wares of the Song period (960-1279) and reflects the Qing emperors’ penchant for these early wares, which they not only collected but also commissioned the imperial kilns to recreate or imitate as tribute. Even the unglazed foot has been stained with a brown wash to simulate its predecessors.

Yongzheng mark and period vases of this type are extremely rare, possibly due to the sheer difficulty for Jingdezhen craftsmen to successfully fire large vessels in this glaze. Another similar guan-type vase from the Qing court collection and still in Beijing, is illustrated in The Complete Collection of Treasures of the Palace Museum. Monochrome Porcelain, Hong Kong, 1999, pl. 204, and another sold in these rooms, 9th October 2007, lot 1534.

The production of such vase continues onto the Qianlong reign when their production appear to be more frequent. See a slightly smaller Ru-type hexagonal vase sold in our New York's room 23rd March 2011, lot 736, and two other related examples, the first sold twice in our Hong Kong rooms, the latest on 3rd October 2017, lot 3638 and another sold 8th October 2014, lot 3508, from the collection of Sakamoto Gorō.