Seated in meditation, his legs crossed in padmasana, the hands resting in his lap in dhyanamudra, wearing loose robes draped over the shoulders and tied at the waist, the head lowered with serene expression, the hair fashioned in a mass of tight curls, set on a stylised double-lotus-lappet base. Modelled as a crab resting on a large unfurled lotus leaf, a smaller lotus-leaf receptacle on its back, the spout extending from the lotus-stem foot. The cylindrical incense burner on three bracket feet, covered overall with an ivory-white glaze and exposing the unglazed pale cream body, 10.3cm (4in) diam.; and the bottle vase with a scaly chilong encircling the neck, the bifurcated tail trailing down the body, 15cm (5 7/8in) high. The larger modelled as the Warrior God Guandi seated on a simple throne, wearing armour under his plain robe, and a ribboned Official's hat, 25.5cm (10in) high; and another smaller figure, depicting Tudi shen, the God of the Earth, seated wearing heavy looping robes and a high cap, 16.5cm (6in) high.

Note: A similar blanc-de-Chine figure of the Earth God, Ming dynasty, is illustrated in Dehua Wares Collected by the Palace Museum I, Beijing, 2016, no.60. See also another identified as the Earth God, illustrated by J.Ayers, Chinese and Japanese Works of Art in the Collection of Her Majesty The Queen, Vol. I, London, 2016, nos.60 and 61, with provenance of 'almost certainly George IV and identifiable in the Royal Pavilion Inventory as 'A Sitting Joss in a chair.' 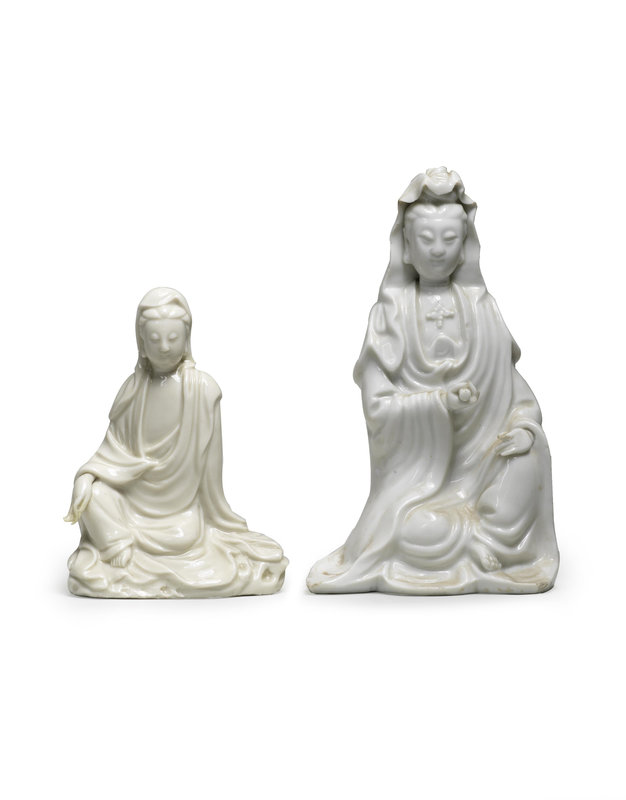 Each dressed in elaborate flowing robes with a high cowl, one holding a scroll, the other with the hand resting on the right knee and with serene expression.

Note: A figure similar to the smaller one is illustrated by Gong Liang, Nanjing Museum, Nanjing, 2013, p.88, no.26; see also another related figure of Guanyin, 17th/18th century, illustrated by J.Ayers, Chinese and Japanese Works of Art in the Collection of Her Majesty The Queen, Vol.I, London, 2016, no.58. Note: For a related example see J.H.Seto, Handbook of the Oriental Collection: Birmingham Museum of Art, London, 1988, no.30; see also another blanc-de-Chine vase, Qing dynasty, illustrated in Dehua Wares Collected by the Palace Museum I, Beijing, 2016, no.81; and another similar blanc-de-Chine vase, mid 17th century, is illustrated by R.Kerr and J.Ayers, Blanc de Chine: Porcelain From Dehua, London, 2002, no.69. One modelled as a seated figure of Guanyin with her left hand resting on her raised left knee, her right hand holding a scroll, cold painted and gilt-lacquered, 17.7cm (7in) high; and a standing figure of Guanyin, modelled with serene face and down-cast eyes, clad in loose flowing robes, 34cm (13 1/4in) high.

Note: See a related blanc-de-Chine figure of Guanyin illustrated by B.Gundestrup, The Royal Danish Kunstkammer 1737, Copenhagen, 1991, pp.148-149; and another example illustrated by Å.Setterwall, S.Fogelmarck and B.Gyllensvärd, The Chinese Pavilion at Drottningholm, Copenhagen, 1974), pp.168-169. For a related standing figure of Guanyin impressed with a He Chaozong seal mark, see C.J.A.Jörg, Chinese Ceramics in the Collection of the Rijksmuseum, Amsterdam: The Ming and Qing Dynasties, Amsterdam, 1997, no.281.