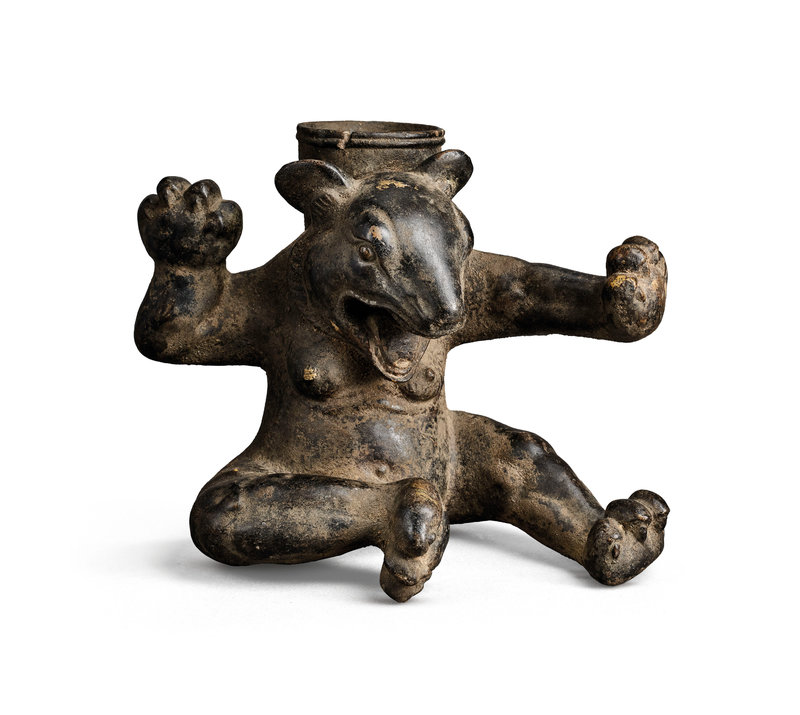 The seated bear is shown almost as if stretching, with right leg bent and the left extended and slightly bent, the claws of all of the paws curled under. The head is turned slightly to the side, and carved with mouth agape and ears pricked above ruffs of fur. A partially hollowed columnar tube rises from the bear’s back to above its head to a rim carved with a ridged band. There are blackish surface accretions overall.

Provenance: A German private collection, acquired prior to 1966.

Note: During the Han dynasty, the bear, which symbolises bravery and strength, was a popular image incorporated into various aspects of mortuary art, primarily as the stand of various vessels or furniture, but also seen with other animals and images of immortals in mountainous landscapes, meant to depict the realm of the immortals.

Extremely few stone bears from the Han dynasty have survived. A bronze bear in a very similar pose, attributed to the Tang dynasty, is illustrated in the Qianlong-period woodblock printed catalogue Xiqing Gujian, ‘Inspection of Antiques’. This very bronze bear is now preserved in the National Palace Museum, Taipei, and has been re-dated by the Museum to the Han dynasty, illustrated in The Refined Taste of the Emperor: Special Exhibition of Archaic and Pictorial Jades of the Ch’ing Court, Taipei, 1997 pp. 70-71 (fig. 1). The Qianlong Emperor was so fascinated by this bronze bear he ordered court artisans to carve a white jade bear of the same design with a fanggu mark, illustrated ibid.