Of ovoid form with a narrow, flared foot and cylindrical neck, each side reserved with a gilt quatrelobe cartouche painted with a chinoiserie scene, one side in the manner of J.G. Höroldt depicting a bending figure preparing tea attended by another figure holding a basket and fan, with birds in flight overhead, the reverse in the manner of J.E. Stadler showing a figure holding a parasol together with a smaller figure by flowering plants and with birds overhead, the rim of the neck with a band of scrollwork, the domed cover similarly decorated, the finial embellished in gilding  (haircrack to cover). 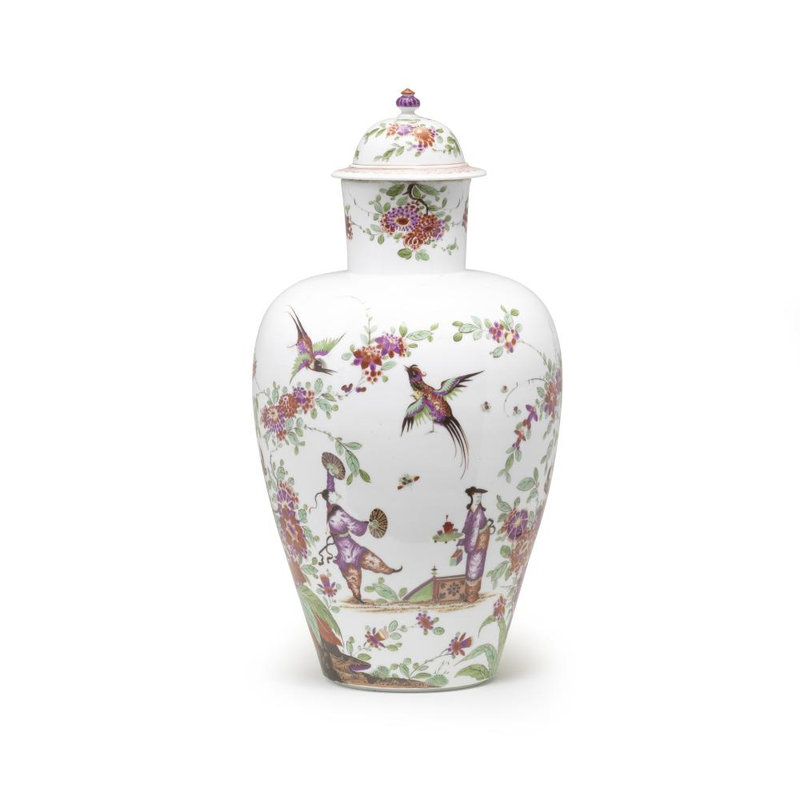 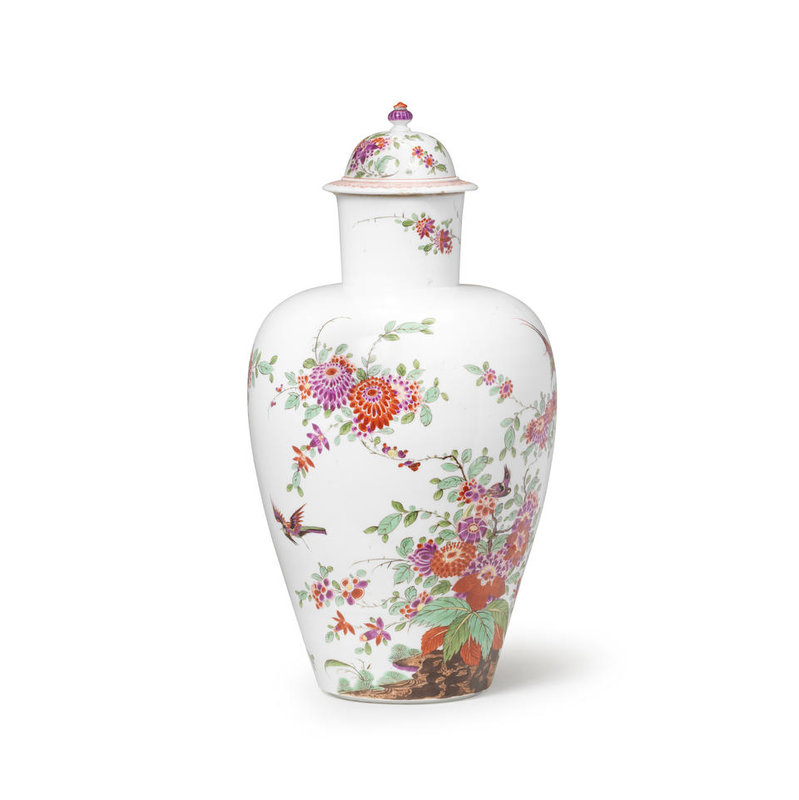 Of ovoid form, superbly painted in the manner of J.E. Stadler with a vignette depicting two large chinoiserie figures enclosed by vividly coloured indianische Blumen and birds in flight and perched on the flowers, the neck with similar flowering branches, the domed cover similarly decorated with an iron-red border of whorls and sunbursts to the rim.

Note: A closely similar vase, possibly the pair to the present lot, is in the Victoria & Albert Museum, London (accession no. C.48&A-1971). Modelled by Ernst August Leuteritz in 1851, each decorated in the style of Limoges enamels with mythological scenes in white on a dark blue ground, depicting Pluto abducting Proserpina, Cybele beside a lion, Ceres in a snake-drawn chariot and Apollo in his chariot, between gilt classical borders and above a band of moulded overlapping acanthus leaves, the gadrooned foot on a square gilt-edged plinth. 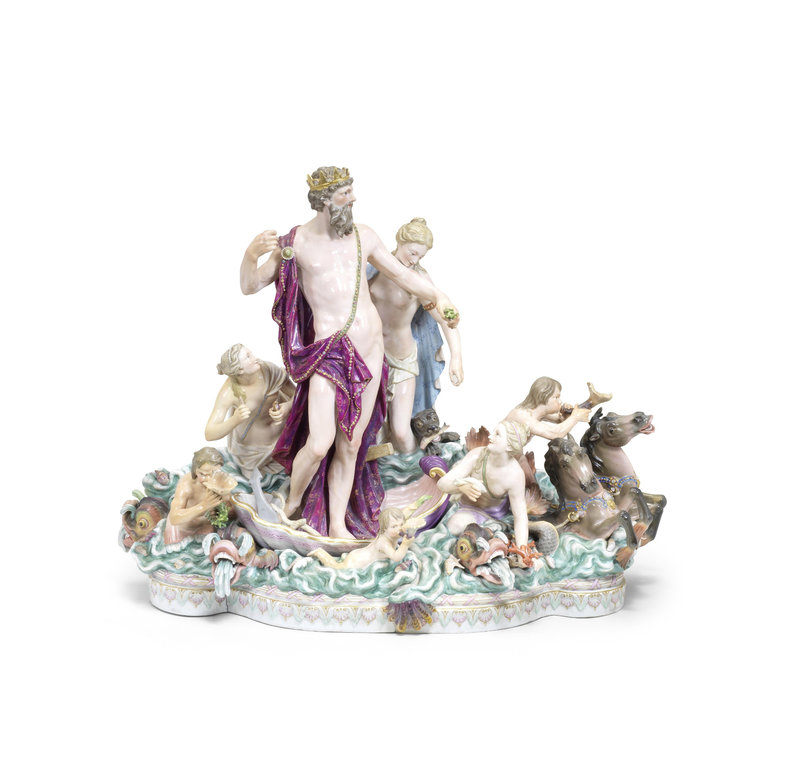 After the models by J.J. Kaendler of 1772-1773, each in three parts, the first depicting Neptune holding his triton and a wreath standing by an anchor in his shell chariot with Thetis behind him, attended by Nereids and Tritons and bridled hippocampi, all on a base of waves on a lobed base moulded with neo-classical borders; the second depicting the sea goddess Amphitrite seated in triumph in her chariot pulled by dolphins, holding a sceptre and attended by cupids with shells, coral and a wreath overhead and further Nereids and Tritons, all on dense waves applied with shells and a tortoise on a lobed base with moulded neo-classical borders, (some restoration and losses).

Note: Modelled by Kaendler in November 1772 (Amphitrite) and February 1773 (Neptune) as part of the "Great Russian Order" intended for the decoration of a cabinet in the Pavilion neat the Bobsleigh Hills in the park of Oranienbaum Palace; both Amphitrite and Thetis were intended to allude to the Czarina Catherine the Great. See U. Pietsch (ed.), Meissen for the Czars (2004), pp. 103-125, for a discussion of the gift for the Czarina Catherine the Great. Painted in the centre with a circular medallion of chrysanthemums reserved against iron-red foliage enclosed by an elaborate gilt and Böttger lustre strap- and scrollwork border enclosing parasol motifs alternating with flower-heads, the rim with four finely painted chinoiserie scenes within gilt and Böttger lustre cartouches, divided by a gilt seated pagoda below a lustre and gilt parasol and flanked by foliate scrollwork, the reverse with three trailing branches of indianische Blumen and insects, (very minor wear). Each side finely painted in enamels, gilding and lustre with a chinoiserie scene depicting two figures flanked by flowers and vessels containing objects, within a gilt scrollwork cartouche filled with Böttger lustre and embellished with iron-red and purple scrollwork,the handle and spout flanked by insects and flower sprigs, a gilt scroll- and strapwork border below the rim, the domed cover with a hinged mount, decorated with two similar chinoiserie vignettes, the spout with a hinged cover, the footrim with a silver-gilt mount. Modelled by J.J. Kaendler, looking over its shoulder, the spout protruding from its neck, its tail forming the handle of the pot, the plumage painted in shades of brown, black, yellow and iron-red heightened in gilding, gilt foliate motifs to the rim, the cover in the shape of a monkey eating fruit, (some chips to tail and toes).

Note: The model is loosely based on a Chinese Yixing stoneware example. Another one of this model with a different finial is illustrated by R. Rückert, Meissener Porzellan 1710-1810 (1966), no. 1126. Each naturalistically modelled and finely panted in shades of grey, the bases modelled with gilt-edged scrollwork and applied with leaves and flowers, (one with tail restuck) .

Note: Another example of this rare model is in the Hermitage Museum, St. Petersburg (published by K. Butler, Meissner Porzellanplastik des 18. Jahrhunderts (1977), no. 379). 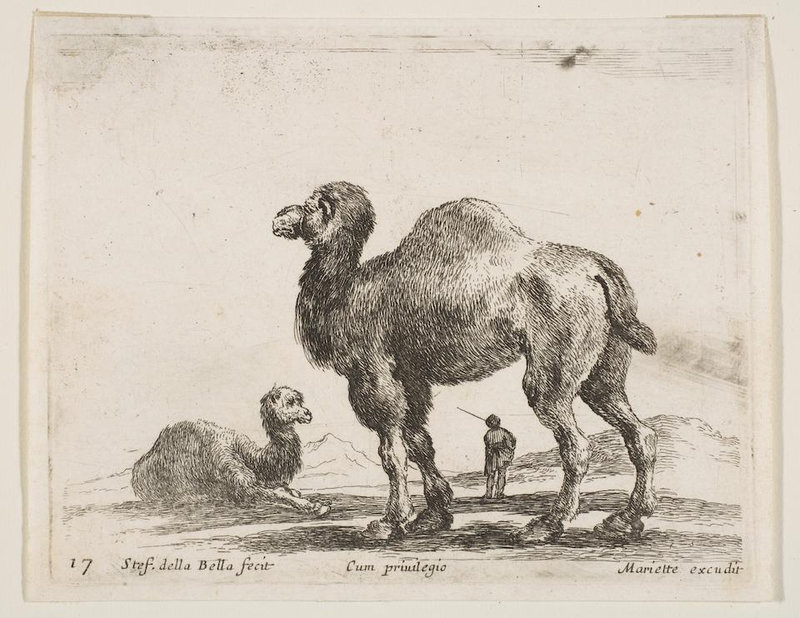