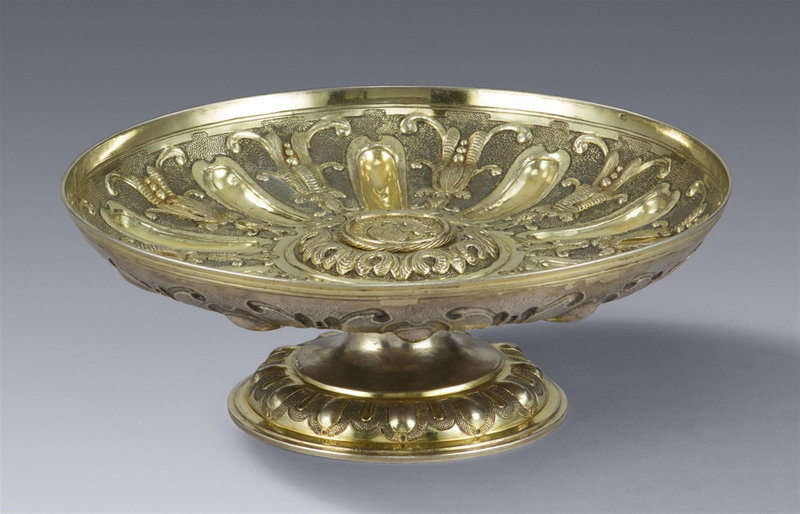 Gadrooned gilded base with snakeskin engravings supporting a slender shaft. The interior of the bowl entirely gilded; the raised central node decorated with an impression of a coin with a dragon holding the Bourbon coat-of-arms inscribed “S:ANTHOINE: PARENT”. The rim with radial concave gadrooned motifs alternating with raised foliate garlands on a stamped ground.

Cf. the stembowl made by Adriaen van Swieten of Leiden in the Rijksmuseum, Amsterdam, inv. no. BK-NM-12135.

Note: Due to its later Dutch hallmarks, this splendidly decorated bowl was previously attributed to the Netherlands, and was presumed to have been made in Leiden, due to a similar object in the collection of the Rijksmuseum, Amsterdam. However, in the collection of the August Kestner Museum in Hannover there is a second, almost identical object, with only the central coat-of-arms varied, with the marks of Tobias Kramer, from 1620 - 1625. Another tazza in the collection of the British Museum, with the enamelled coat of arms of Martin Scholl, the town clerk in Biel, also bears Kramer's marks in addition to several English and Continental control marks. In the catalogue of the 1980 exhibition, the marks were again discussed, as the bowl in England is dated 1597. In Tobias Kramer's case, Seling suggests a date of birth of around 1582, which would make the object a very early work. His master's examination did not occur until around 1613.

Seling found two more stembowls/credenzas by the master: one in the treasury of the cathedral of Wawel in Krakow (inv. no. 6044) and another in the Kremlin Museum in Moscow (inv. no. 11658). Tobias Kramer died in around 1634, but nevertheless left an important œuvre, which includes, among other things, a gilded clock in the shape of an elephant, which is today housed in the Kunsthistorisches Museum Vienna, and presumably also the present bowl.