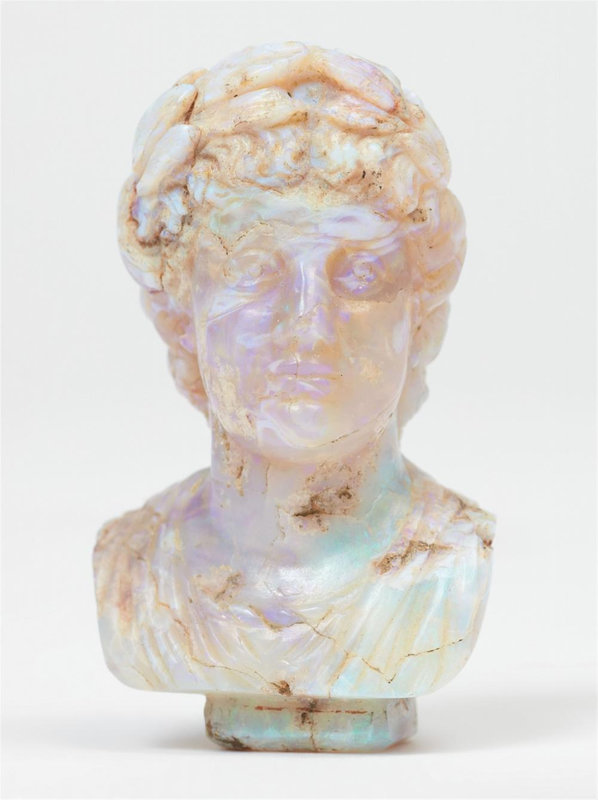 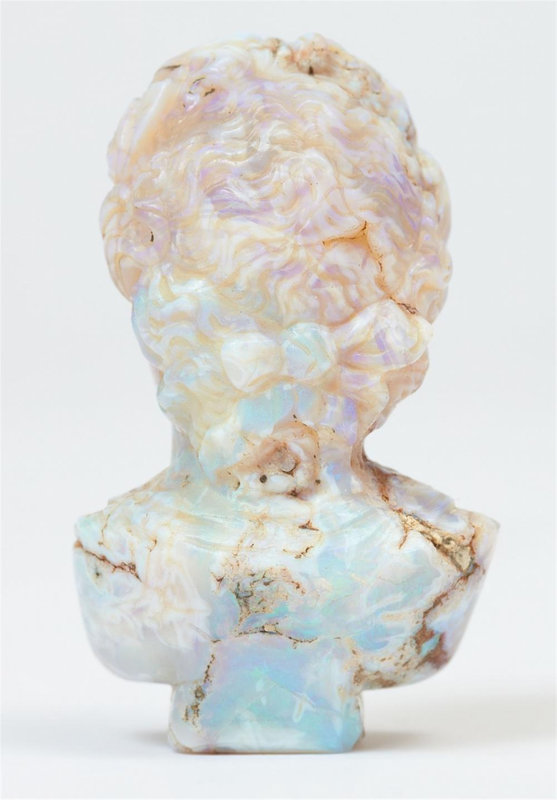 Imperial Roman style bust carved in the round from white/mother-of-pearl coloured opal with blue and green opalescence. Depicting a Neoclassical portrait of a man with short curly hair wearing a lush laurel wreath fastened by a ribbon at the back. The rounded lower section of the bust carved to resemble a pleated chiton and himation and with a rectangular mounting pin. The tip of the nose chipped. Some dark vein inclusions from the matrix. With minor hairline drying cracks.

Literature: For the comparable pieces see Gennaioli, Pregio e bellezza cammei e intagli dei Medici, 2010, p. 218/19, no. 97/98 and p. 220/221, no. 99/100. Here the above mentioned composite busts in the Palazzo Pitti; cf. also Bulgari, Argentieri gemmari e orafi d'Italia, Rom 1977, p. 144, plate 11. A silver bust with an amethyst head after an ancient prototype bearing the signature of the intaglio maker Belli from Vicenza, dated around 1766. For the ancient prototypes cf. a small winged head of Mercury carved from chalcedony dating from the 1st/2nd C. A.D in The Metropolitan Museum of Art in New York (no. 1977.187.4, Bequest of Alice K. Bache, 1977); a miniature bust of a young woman carved from chalcedony, 2nd / 3rd C. A.D in The Metropolitan Museum of Art - Rogers Fund, 1907 inv. 07.286.125; Cf. also the exhibition catalogue Sigilli imperiali, capolavori della glittica antica, Banca della Svizzera Italiana, Padua 2007, N.46, which illustrates a small head of Aphrodite or a Julian/Claudian princess carved from chalcedony and dating from the 1st C. A.D., auctioned by Sotheby's New York, 7th December 2001, no. 86.

Note: This astonishingly well-preserved miniature bust of an emperor is particularly precious because it was carved from opal, a stone which is rarely used in sculptural carving due to its softness and fragility. Small sculptures made from gemstones are generally uncommon, as this form of carving required a great deal of skill from the gem cutter. The bust depicts a beardless man with short hair parted in the middle and with two characteristic sickle-shaped forelocks. Stylistically, it is based on portraits of ancient Roman emperors from the Julio-Claudian era. However, the work is not intended to depict any one specific person, but rather a classical type.

Small gemstone busts such as this, mounted on magnificent plinths or set into composite figures, adorned European art collections throughout the 16th - 18th centuries. When the advent of the Renaissance brought about a renewed interest in the culture and relics of antiquity among humanists and rulers, this soon led to a fashion for collecting Greek and Roman stone carvings. This also stimulated a revival of the art of gem cutting among contemporary artists, who were inspired by ancient models. People also combined modern works with antiquities to create so-called composite figures. The collection of the Palazzo Pitti in Florence, for example, possesses six Renaissance busts made of alabaster on which ancient miniature heads of the 2nd century A.D. made of various hard stones are mounted (Collezione Palazzo Pitti, Inv. Gemme 1921, nos. 408, 415, 526, 533, 797, 652).