Living through a global pandemic changed the world forever in many ways. One positive outcome was that we all united with a sense of hope for better days ahead.

Evelyn De Morgan was born during the Crimean War (1853-56), at a time when life in Victorian Britain was both full of the spirit of progress but dogged by short-lived military conflicts. She also lived through the Boer Wars and First World War. The outbreak of the First World War, which brought daily reports from the frontline and the huge death toll, deeply affected De Morgan. Possessing a strong belief that art should have a moral purpose, De Morgan fashioned an artistic response to war using a deliberate synthesis of academic style, symbol and allegory to convey pacifist meanings and values. Her artwork became cathartic, allowing her a platform to present her profound fears and her hope that better days would come. These paintings resonate deeply with our own experience of living through a global crisis.

Evelyn hoped her art would act as pacifist propaganda, but also used it to help practically towards the war effort, by holding an exhibition at her studio in London in 1916 to raise funds for the Red Cross. The result of this exhibition was a body of work which not only acts as a powerful expression of the effects of conflict upon De Morgan and fellow Britons, but can also be understood as a universal statement about the anxiety, grief and ultimately hope that accompany any war.

The prismatic pictures filled De Morgan’s 1916 exhibition with rainbows, much like our homes, shops, and hospitals were emblazoned with this universal symbol of hope during the Coronavirus pandemic. ‘De Morgan’s works could have been painted in response to the pandemic. S.O.S. is one painting in particular that resonates so profoundly with our collective experience of needing hope in the face of crisis. It depicts a woman in white robes reaching out towards a rainbow, while demons snap at her ankles. De Morgan used the demons to represent the First World War, but today we can see those demons as the pandemic, and the woman as all of us reaching towards the rainbow’. Sarah Hardy, Curator, The De Morgan Foundation

‘Arts and crafts have played such an important role in the rehabilitation of our veterans from the First World War to the present day so we are delighted to be involved with the exhibition. After the last year and a half I am sure people will be inspired by the hope represented not only in the magnificent art but also our veterans’ stories.’ Blind Veterans UK CEO, Major General (Rtd) Nick Caplin CB Study of a Boy for Our Lady of Peace (c.1907) by Evelyn De Morgan (C) De Morgan Collection, courtesy of the De Morgan Foundation. 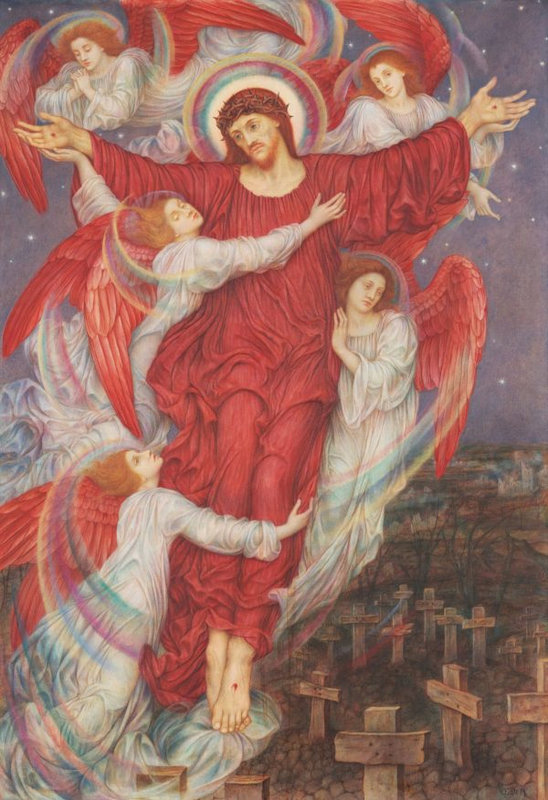