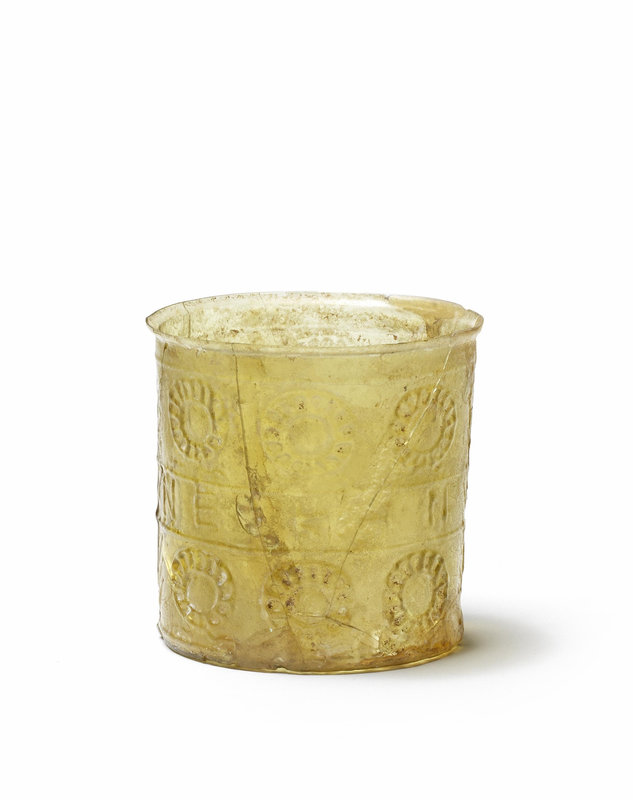 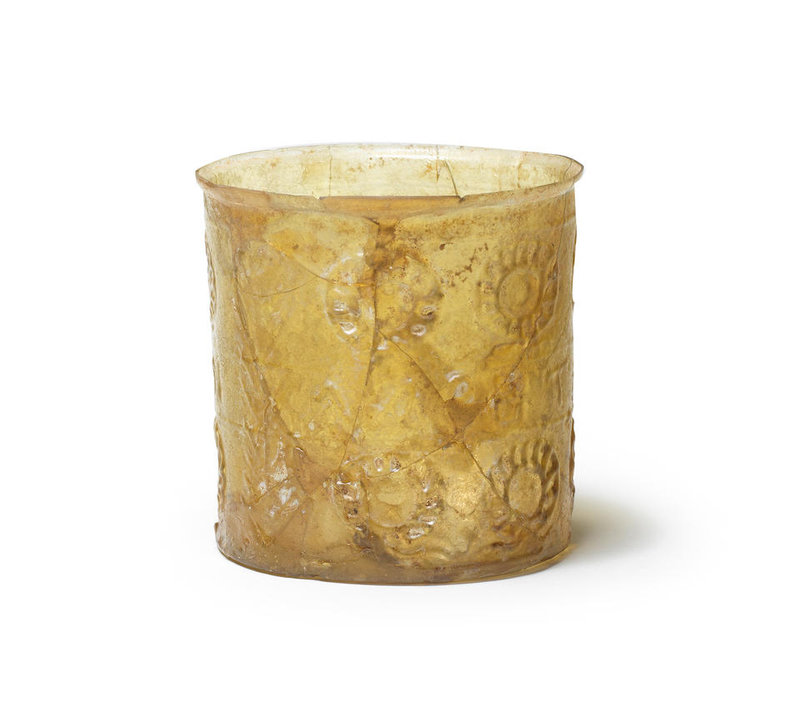 Blown in a two-part mould, of cylindrical form with a narrow everted rim, with three registers of decoration divided by horizontal ribs, the upper and lower with six stylised victory wreaths, a pair of opposing palm branches concealing the vertical mould seams, the central register with Greek inscription: ɅABE THИ NEIKHN ('Seize the Victory'), the underside of the flat base with a single raised circle.

Note: This beaker is an important example of a group of mould-blown drinking cups which have been variously suggested as commemorative of drinking games, chariot races and gladiatorial contests; though the specifics remain debateable, the inscription of 'Seize the Victory' and the stylised wreaths confirms this cup was used for celebration of some sort of feat.

These Victory beakers were first discussed and categorised by D. B. Harden in 'Romano-Syrian Glasses with Mould-Blown Inscriptions;, JRS, vol. 25, 1935, pp. 163-186. The Constable-Maxwell beaker falls into Harden's Group K (he lists 17 examples), sub-group 1 iii. A characteristic of this sub-group is the distinctive reversed N, and the extended E in NEIKHN. The reversed N is either the result of a mistake by the mould-maker while working in negative, or an intentional design. If the latter, it may be a maker's mark, the significance of which is now lost.

There are at least four distinct types of these so-called 'Victory' beakers, some of which have been found along the Syro-Palestinian coast, Cyprus, Greece, Sardinia and Panticapaeum in the Crimea. They may have originated from workshops near Sidon, on the Phoenician coast. The collar rim folded outwards, with a pair of vertical 'M' shaped handles of thick trail rising from the shoulder with some encircling tooling mark bands, the piriform body tapering to the narrow splayed hollow foot, the disc-shaped lid with raised conical hollow stem surmounted by a knobbed finial.

Note: In the early Roman Imperial Period cremation was the preferred method of burial in Italy and the Northwest Provinces where the use of cinerary urns for holding the ashes was common practice. Glass urns excavated from tombs in Italy, Gaul and Britain were sometimes found protected within stone or lead containers, which may explain why so many have survived intact.

Cinerary urns with double arched handles and conical lids, like the above lot, can be seen at the Metropolitan Museum of Art, New York, acc. no. 81.10.2a, b and 91.1.1297a, b. Interestingly, as with this lot, the lid of one of the Met examples 'does not fit the urn when placed upright' exactly, and it is suggested that 'it may, however, originally have been placed upside down like a funnel lid'. There are illustrations of urns being discovered with the lid pointing downwards. This is because they were often placed inside lead containers with flat covers, and the glass lid, if placed upright, would make the complete vessel too tall; see an illustration of an example from Carthage reproduced in F. Baratte, 'La verrerie dans l'afrique romaine: état des questions', Kölner Jahrbuch für vor-und Frühgeschichte, vol. 22, 1989, p. 147, fig. 7. Some urns with this shape of conical lid were pierced at the centre and could have been used as a funnel, so that libations could be neatly poured into the urn, again when the lid was inverted with the point facing downwards. For other similar forms of urn and lid in the Louvre cf. V. Arveiller-Dulong & M-D. Nenna, Les Verres Antiques du Musée du Louvre, Paris, 2005, p. 170, fig. 479, and for the lid p.176, fig. 505. 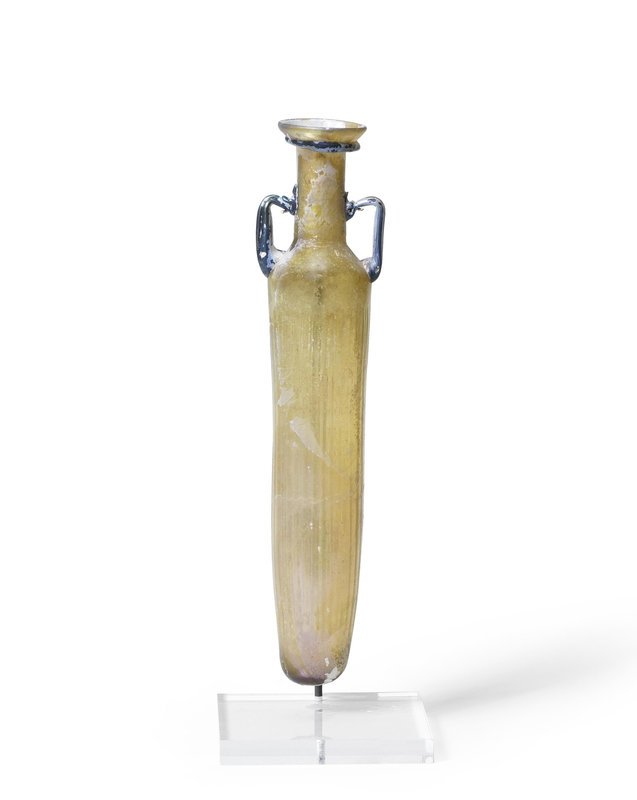 The elongated mould blown body with slender vertical ribs and rounded indented base, with dark blue trail handles, an encircling band of trail beneath the flaring mouth.

Note: Such vessels may have contained caroenum, a wine sauce frequently used to sweeten Roman dishes. 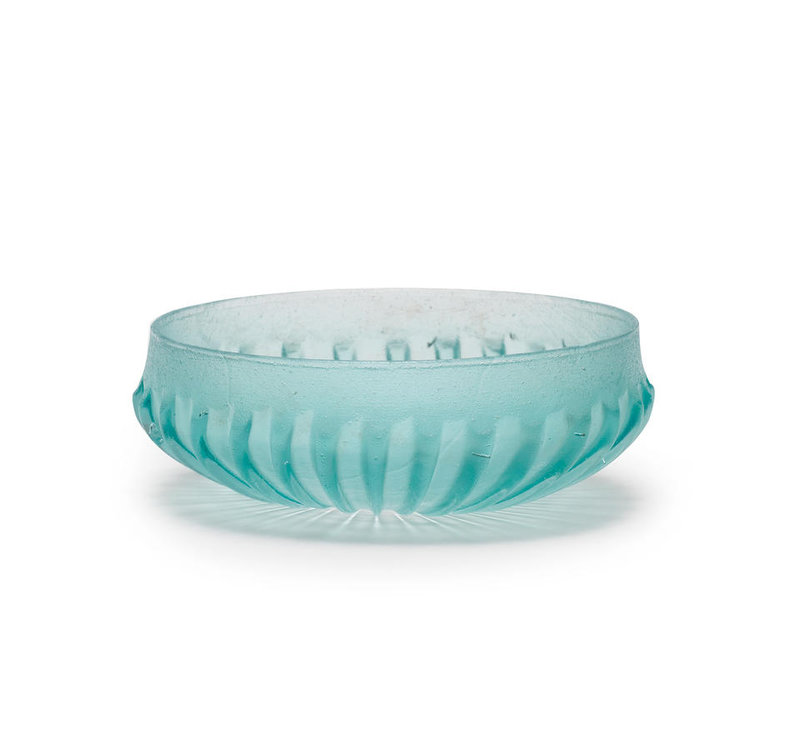 The hemispherical bowl cast with twenty-nine vertical ribs on the exterior, decorated on the interior with a wheel-cut groove below the rim and with concentric wheel-cut rings in the centre, with a short vertical rim and a flattened base. 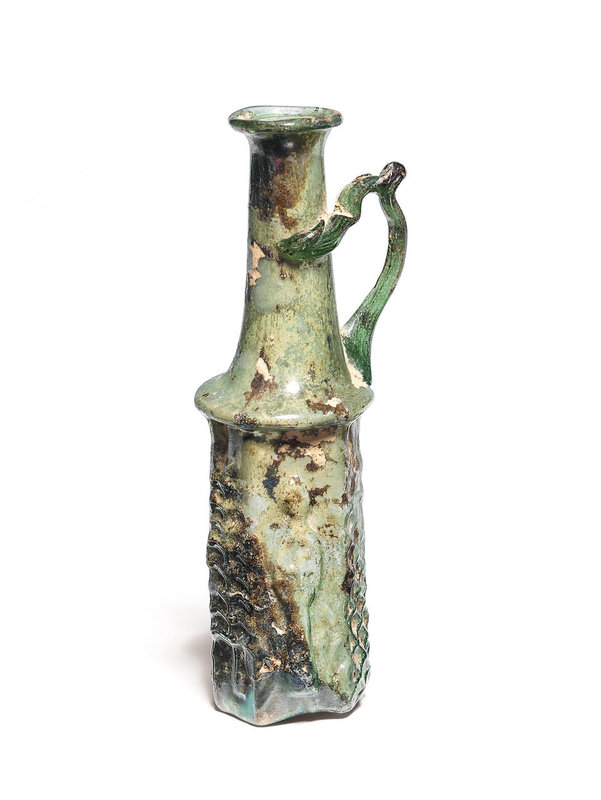 Blown into a six-sided two-part mould with the mould-seam running across the base, and the shoulders expanding over the top of the mould, decorated in low relief on all sides of the body, clockwise from beneath the handle: (1) a palm frond; (2) an ampulla with a vine rising from within; (3) a large cross set above a saltire (crux decussata) with dots; (4) a palm frond; (5) the figure of a saint holding a cross, a wavy line on his robe; (6) diamond latticework; the cylindrical neck with inward-folded rim, the pincered wishbone handle with a pinched thumb-rest, with concave base.

Provenance: with Antiquarium Ltd, New York (Reflections of Antiquity. Ancient Glass Through the Ages, 1989, p. 22).
Private collection, USA, acquired from the above 30 September 1992.

Note: This jug is an incredibly rare survival. The figure depicted is likely a Stylite saint and, more specifically, probably St Simeon Stylite (c. 389-459 A.D.), whose pillar and subsequent church at Qal'at Sema'an, near Antioch, was a great pilgrimage centre, where a wide variety of souvenirs and eulogiae in pottery and glass were produced for the large number of visiting pilgrims.

The base of the elongated neck constricted and then expanding towards the spherical body, a band of spiral trail decoration beneath the funnel mouth with further horizontal trails above and below, with pushed-in base, ink number '1502' on the underside of the base.

Parmenia Migel Ekstrom (1908-1989) was a ballet historian and author, as well as the founder and president of the Stravinsky-Diaghilev Foundation.