The Cox Collection: The Story of Impressionism to be offered at Christie’s in november

The Cox Collection: The Story of Impressionism to be offered at Christie’s in november New York — Christie’s is honored to announce The Cox Collection: The Story of Impressionism, one of the greatest American collections to ever appear on the market. Masterpiece works by Caillebotte, Cézanne and van Gogh will headline the 25 works from the collection offered in November, and a dedicated sale of decorative arts and furniture will take place online in December. The collection was assembled half a century ago and is expected to realize in excess of $200 million. A portion of the sale proceeds will benefit educational purposes. A global tour of highlights from the collection will include stops in Taipei, Tokyo, Hong Kong and London, before the auction preview at Christie’s Rockefeller Galleries in New York.

For more than half a century, the businessman, collector, and philanthropist Edwin Lochridge Cox stood at the forefront of civic life in Texas and the greater United States. A cherished figure in his home city of Dallas, Cox was celebrated as not only a true visionary in the field of American energy, but as an indispensable benefactor and patron of some of America’s most important cultural institutions. Throughout his 99 years, Edwin L. Cox cultivated a profound personal legacy centered on the core values that guided his extraordinary trajectory: entrepreneurship, scholarship, and the importance of helping others.

Stephane Connery, Art Advisor, notes, “Ed Cox, the most refined of southern gentlemen, was a passionate collector only guided by the very best. His quest for masterpieces of Impressionism started half a century ago and led to the finest collection of its kind left in private hands. It is a joy to know that so many will finally get to discover such a legendary group of works many of which were last seen publicly before World War II.”

Adrien Meyer, Global Head-Private Sales & Co-Chairman-Impressionist & Modern Art, remarks, “Perhaps one of the finest collections of Impressionist art to ever come to auction, the Cox collection will be remembered as a milestone in the art market. Most of the pictures will be seen as a once in a lifetime opportunity for any collector or museum.”

The Cox Collection tells the story of Impressionism and Post-Impressionism at the highest level and encapsulates many of the defining stylistic and thematic characteristics that constitute these seminal movements. Highlighting the collection is one of the most iconic paintings in Gustave Caillebotte’s oeuvre, and cover of the catalogue raisonné, the imposing Jeune homme à sa fenêtre completed in 1876, estimate on request (in excess of $50 million). The work depicts the artist’s middle brother René gazing out of the window of the family’s residence in Paris’s 8th arrondissement. Presenting a novel view of Parisian bourgeois life in which a young man is captured in a moment of contemplation as he watches the street from an elegant apartment, this work showcased the influence of Caillebotte’s academic training alongside his growing interest in realism. The painting, which would later be featured in the first exhibition of Impressionist works ever staged in America in 1886, earned the artist a reputation within the Parisian art scene as an insightful chronicler of contemporary life. Jeune homme à sa fenêtre quickly became known as one of his most emblematic works. Vincent van Gogh’s Cabanes de bois parmi les oliviers et cyprès combines the artist’s favorite Provençal motifs and encapsulates the characteristics of the artist’s mature style that emerged at Saint-Rémy, where it was executed in October 1889, estimate on request (in the region of $40 million). van Gogh’s yearlong stay in Saint-Rémy would see his work reach a climax of expression, as he depicted the world around him with an ever-greater intensity. Sheltered in the asylum, he encountered spells of mental illness interspersed with periods of prolific production. “I’m ploughing on like a man possessed,” van Gogh wrote to his brother Theo from Saint-Rémy in September 1889, “more than ever I have a pent up fury for work, and I think that this will contribute to curing me.” With the motif of the olive tree, van Gogh was able to explore his now famed expressionistic artistic language—as the present work masterfully shows. These circular strokes and snaking, impastoed lines came to dominate van Gogh’s work in Saint-Rémy. 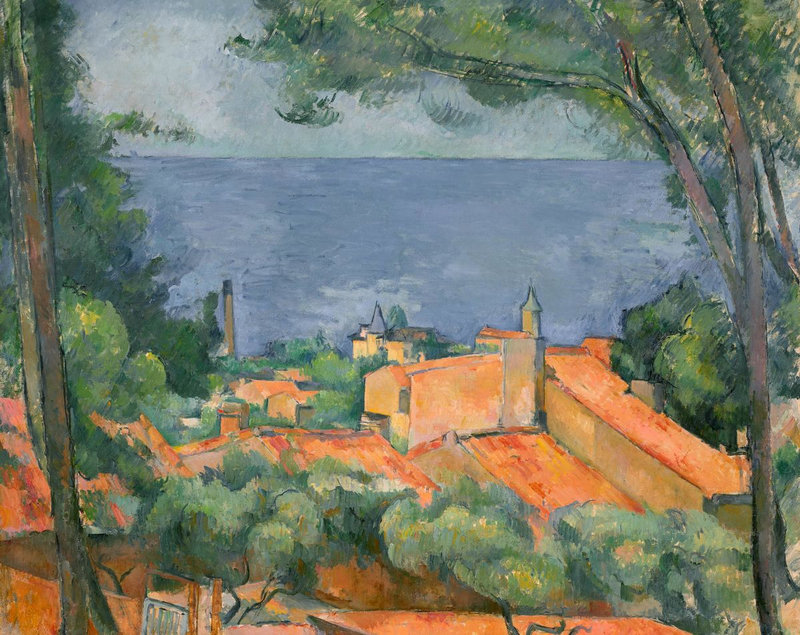 Paul Cézanne’s L’Estaque aux toits rouges painted circa 1883-1885 is one of the most innovative landscapes of its period (estimate $35,000,000-55,000,000). Carefully cropped and vibrantly colored, the cubically constructed houses and plane of blue sea encapsulate the various aspects that Cézanne had been pursuing. It is one of the culminating works of the intense surge of creativity that L’Estaque had unleashed in the artist over a series of visits there in the late 1870s and early 1880s. Reducing the landscape to its elemental components Cézanne increasingly experimented with an abstract construction of the world around him, in which overlapping planes of color take the place of conventional modeling.

Commentaires sur The Cox Collection: The Story of Impressionism to be offered at Christie’s in november