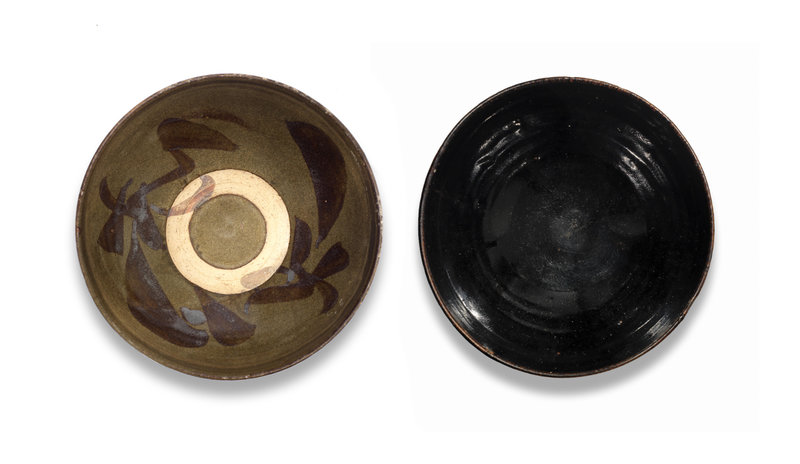 The greenish-glazed bowl with gently rising ribbed sides rising from a short slightly flared foot, covered with a dark-olive green glaze save for a circular band in the interior, the interior painted with loose and bold strokes depicting stylized flowers, wood stand, 19.2cm (7 1 / 2in) diam. the black-glazed bowl of similar form with steeper sides and covered with a lustrous blackish-brown glaze stopping unevenly above the foot revealing the biscuit body, wood stand, 18.5cm (7 1 / 2in) diam.

Note: Marchese Taliani was a distinguished Italian diplomat who lived through major historical upheavals of the first half of the 20th century, events whose impact affect all to this day. His first diplomatic appointment was to Berlin in 1912; followed by Constantinople in 1913, where during the First World War he negotiated an agreement for the protection of Italian citizens and interests in the (soon to be partitioned) Ottoman Empire. From 1916 to 1919 he served in St Petersburg, and under the privilege of diplomatic immunity was in a unique position to observe and chronicle first-hand the October Revolution, its day by day development, the subsequent fall of Tsarist Russia and the establishment of the Soviet Republic; from 1919 he served in Rome as Secretary of State for the Ministry of Foreign Affairs; with later assignments to London (1921 - 1923) and again to Constantinople (1924 – 1928), this time as the Republic of Turkey; from 1929 - 1930 he was in Rome as Head of Protocol of the Ministry of Foreign Affairs; in 1932 he was appointed Italian Ambassador to the Netherlands; in 1938 he was appointed Ambassador to China, where he remained until 1946; and his last diplomatic appointment was in 1951 as Ambassador to Spain until 1952.