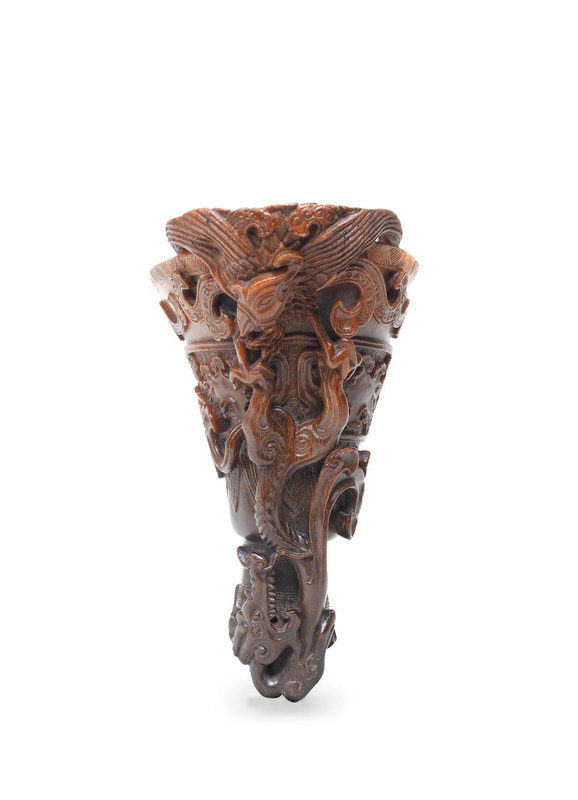 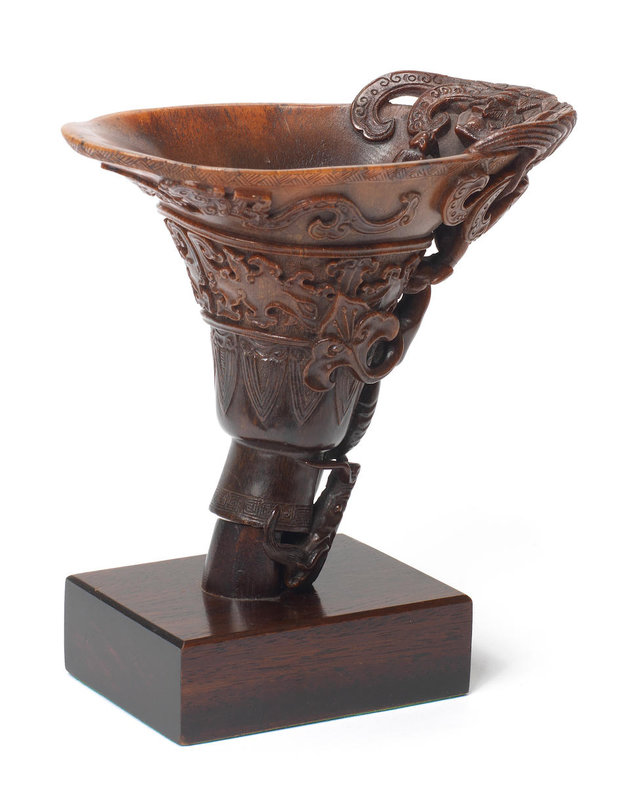 Exquisitely carved around the exterior with a band of archaistic taotie masks in relief against a key-fret ground, between pendant cicada lappets below and confronting long-tailed phoenix above, the long handle crisply carved as a phoenix detailed with elaborate plumage curling over the rim, approaching a slender chilong coiling beneath and snaring upwards with jagged fangs, the interior perched by a small high relief chilong, the horn of an attractive honey-amber tone, wood stand.

Provenance: a distinguished European private collection, on loan to the Oriental Museum, Durham, from the mid-1970s to circa 2011, and thence by descent.

Note: This rhinoceros horn libation cup demonstrates the consummate skill of the carver, with the multi-layered carving and naturalistic plumage of the phoenix. The largest dragon is unusual and rare with his ruyi-like bifuricated tail and knobbly spine, his prowess demonstrated in the superbly carved jagged teeth. This design of phoenix and dragon together with the exquisite quality of carving are suggestive of Imperial Qing style. Compare with a related rhinoceros horn 'dragon and phoenix' libation cup, 18th century, illustrated by T.Fok, Connoisseurship of Rhinoceros Horn Carving in China, Hong Kong, 1999, p.87, no.40.

Compare with a related archaistic rhinoceros horn libation cup, 17th/18th century, with similar archaistic motifs and designs of dragon, but without phoenix and the unusual shape of the elongated handle extending below the foot rim, which was sold at Bonhams London, 11 May 2017, lot 301. Exquisitely carved as a blossoming hibiscus flower with six overlapping petals, a long curling stamen issuing from the interior, supported on openwork leafy foliage and flowering hibiscus forming the base, the horn of an attractive dark-chocolate tone.

Provenance: a distinguished European private collection, on loan to the Oriental Museum, Durham, from the mid-1970s to circa 2011 (acc.no.D29), and thence by descent.

Note: The hibiscus is easily recognisable by its stamens which extend far out of the flower. Compare with a related rhinoceros horn carved in the form of a hibiscus with stamen, is illustrated by J.Chapman, The Art of Rhinoceros Horn Carving in China, London, 1999, p.165, pl.206. The elaborately carved dark-honey-coloured horn in the shape of an archaic bronze vessel with six powerful and lively chilongs clambering around the rim and the exterior, the strap handle with a stylised dragon head looking outwards on the rim of the mouth and the tail curling and splitting into two parts with a dragon flat on the handle, the body with a band of six dragons with long writhing bodies, a keyfret pattern running along the foot and the rim.

Note: Compare with a related buffalo horn 'scholar and attendant' libation cup, 17th century, which was sold at Bonhams Hong Kong, 30 May 2017, lot 135. 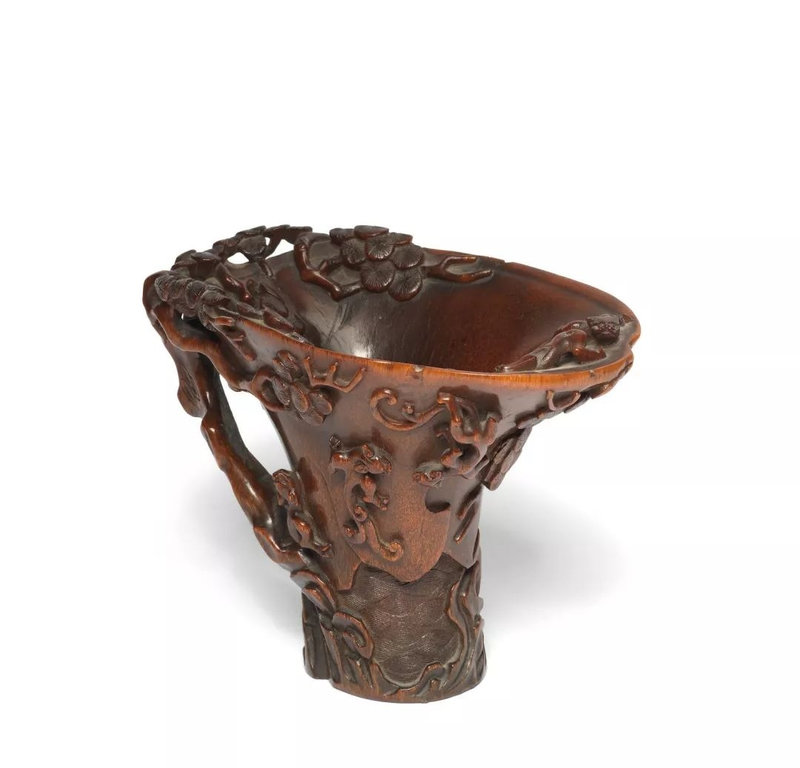 Deftly carved around the exterior with archaistic chilong clambering on rocks beneath a large gnarled pine tree forming the handle and with its branches extending into the interior of the cup, the lower section with finely incised waves visible also on the base, the horn of dark-caramel tone.

Provenance: a distinguished European private collectionHenry Grünfeld (1904-1999), and thence by descent within the family.

Note: Henry Grünfeld, as co-founder of the investment bank S.G.Warburg, was a prominent individual in the development of investment banking and the growth of London as a financial centre following the Second World War. Born in Breslau, he became prominent in the German Steel Industry at the age of just 20 after he took over his father's family steel piping business. Shortly after 1934, following the rise of Hitler, he fled to London where he joined forces with Siegmund Warburg in the New Trading Company, which was established to help refugees from Europe extract their money from their native country and invest it safely.

Rhinoceros horn libation cups that combine naturalistically carved scenes of nature such as pine trees together with archaistic chilong are rare. Compare with a related rhinoceros horn cup with dragons amidst a painterly-style landscape, 17th century, illustrated by T.Fok, Connoisseurship of Rhinoceros Horn Carving in China, Hong Kong, 1999, p.54, no.7. 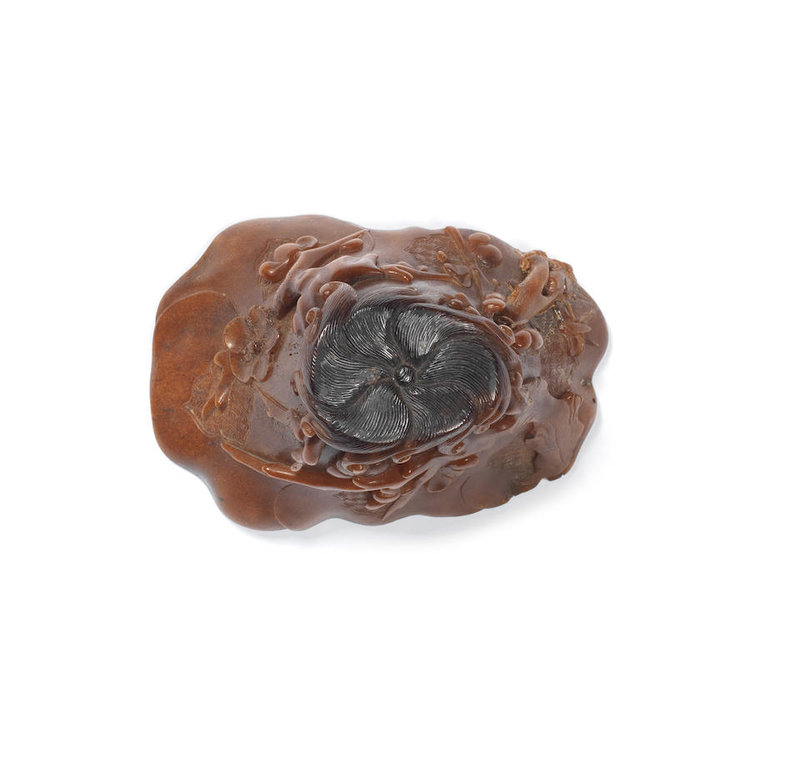 Finely carved around the exterior with pairs of cranes, phoenix, magpies, sparrows, and mandarin ducks, all amidst landscape with bamboo, prunus and pines with two wutong trees forming the handle, the horn of rich caramel-brown tone.

Note: Pairs of birds represent the auspicious wishes for fertility as well as for happiness in marriage, which is the particular symbolism of the pair of mandarin ducks. Related rhinoceros horn libation cups carved with cranes and phoenix in the Chester Beatty Library, Dublin, are illustrated by J.Chapman, The Art of Rhinoceros Horn Carving in China, London, 1999, p.187.

Compare with a similar rhinoceros horn 'auspicious birds' libation cup, 17th/18th century, which was sold at Bonhams London, 11 May 2017, lot 310. Both intricately carved with wavy rims in the form of lotus and raised on a long tapering openwork stem extending to the tip of the horn depicting further blossoming lotus and buds with bees and butterflies, the impressive wood stands elaborately carved.

Note: These large full-tip cups were most probably carved in Guangdong, an important centre producing many categories of works of art including ivory, furniture, clocks and instruments, cloisonné and painted enamel, some of which were made as tribute for the Qing Court. Such impressive full-tip rhinoceros horn libation cups were often made in pairs and raised on intricately carved hardwood stands, accentuating their presence; see a related rhinoceros horn full-tip libation cup, in the Durham University Oriental Museum, illustrated by J.Chapman, The Art of Rhinoceros Horn Carving in China, London, 1999, p.72, pl.38.