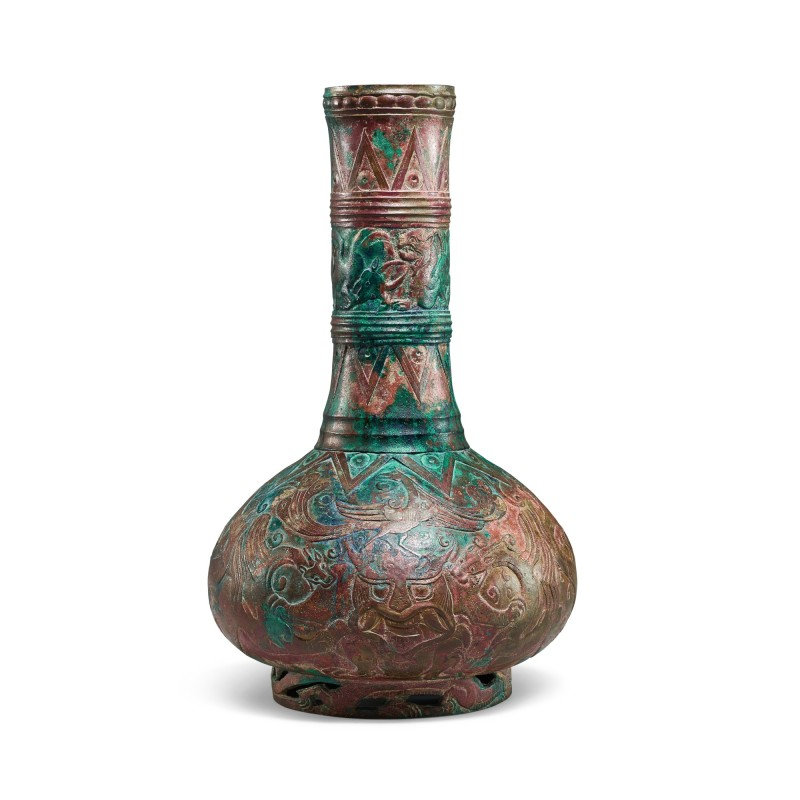 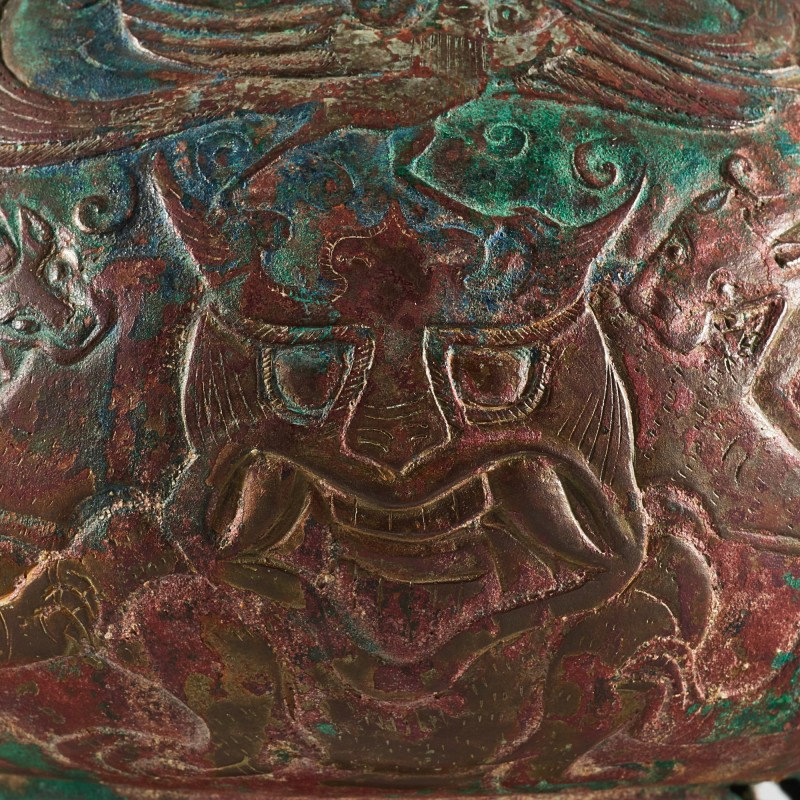 Note: This rare vase is most interesting in its combination of demon-like mythical creatures on the body and naturalistic animal combat scenes on the neck, which are reminiscent of bronzes from the Ordos region in the northeast of China. The vase was probably created for gaming or other entertainment.

A bronze vase of very similar form but with geometric designs and a cylindrical vessel, lian, with related animal designs are illustrated in John Alexander Pope, The Freer Chinese Bronzes, Washington D.C., 1967, pls 112 and 114. Bronzes of these two groups, with animal motifs and with geometric designs such as quatrefoils and dogtooth borders, including this bottle form, are discussed in Jessica Rawson in her article, A Group of Han Dynasty Bronzes with Chased Decoration and Some Related Ceramics, 1973, where they are attributed to the late Western or early Easten Han dynasty and to the southern provinces of China, particularly to Hunan.

The present lot was once in the collection of Julius Eberhardt (1936-2012), an Austrian architect and avid collector of ancient Chinese works of art. Julius Eberhardt had been fascinated by the art and culture of ancient China since the time of his studies. But he returned to this interest only late in life, after a trip to the Far East. Being particularly intrigued by the early dynasties of China's past, he assembled at the end of the 20th century a significant collection ranging from the Neolithic (from the 4th millennium BC) to the Tang (618-907). Note: Freestanding bronze figures of oxen are known from Western Han tombs in Yunnan province; compare, for example, a bronze ox excavated at Shizhaishan, Jinning county, and illustrated in Zhongguo qingtongqi quanji [Complete collection of Chinese bronzes] vol. 14, Beijing, 1993, pl. 162, together with heads of oxen with similar crescent-shaped horns but supporting additional creatures, also from the Shihzhaishan site, pls 163 and 164. Another rare bronze ox was sold in our London rooms, 20th June 2001, lot 4, and another more recently in these rooms, 2nd July 2021, lot 5022. 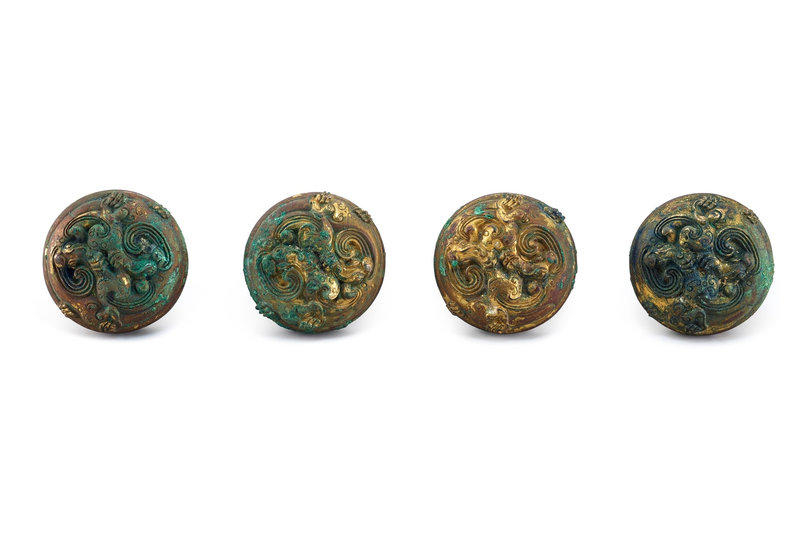 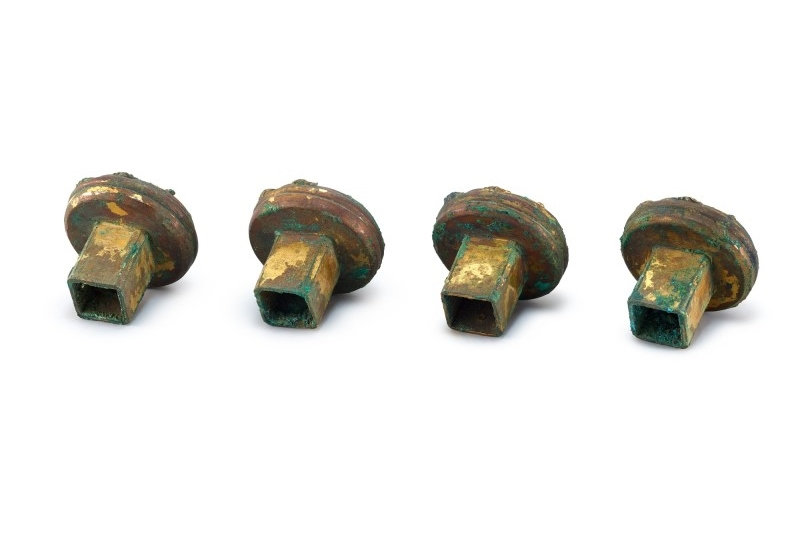 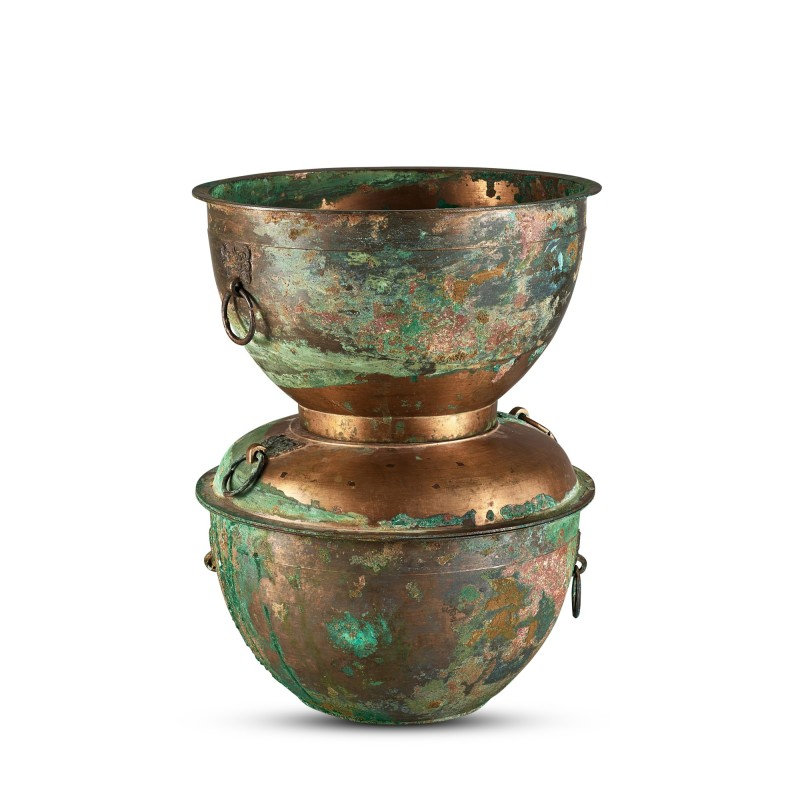