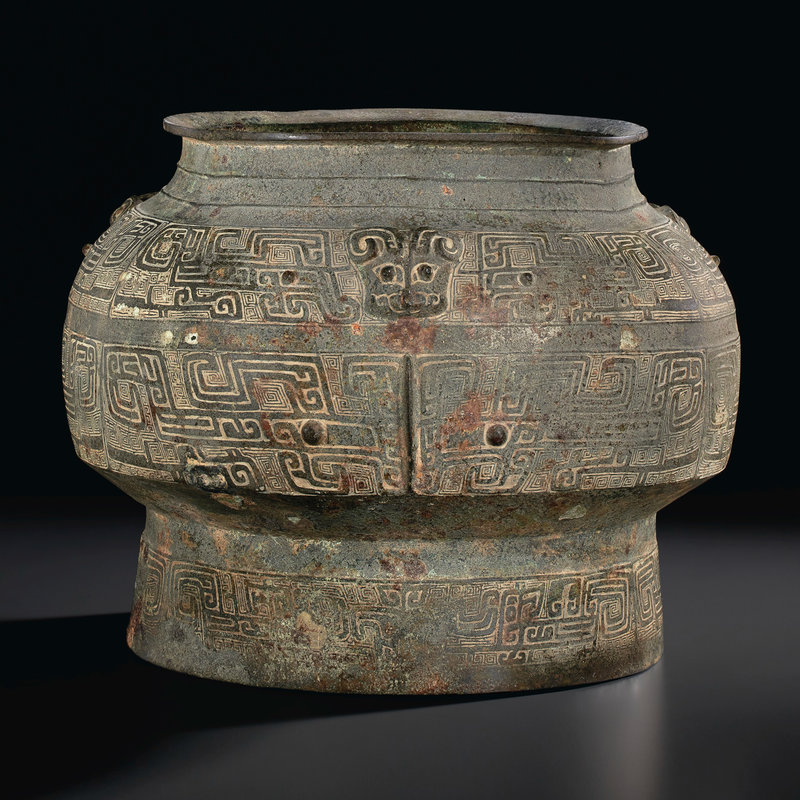 The slightly compressed body is cast in shallow relief with a central band of taotie masks on a leiwen ground, centered by a low flange, below a narrow band of confronted kui dragons divided by three raised beast-head masks. The splayed foot has two pierced apertures above a band of addorsed birds and beast masks.

Note: Pou seem to have been common in the transitional period between the Erligang and Anyang periods, but appear to have become less popular in the later Anyang period, and by the Zhou dynasty were no longer being made.

A pou with similar cast decoration and similar large bovine masks cast in relief on the shoulder is illustrated by R.W. Bagley, Shang Ritual Bronzes in the Arthur M. Sackler Collections, Washington D.C. and Cambridge, 1987, p. 334, no. 57. Also illustrated, p. 337, fig. 57.3, is another very similar pou in the Museé Cernuschi, Paris. Further comparable pou include the example illustrated in Shang Ritual Bronzes in the National Palace Museum Collection, Taipei, 1998, pp. 388-9, no. 65, and the pou excavated from Wulang Temple in Zhenggu county, Shaanxi province, illustrated in Zhongguo Qingtongqi Quanji - 4 - Shang (4), Beijing, 1998, p. 102, no. 105.