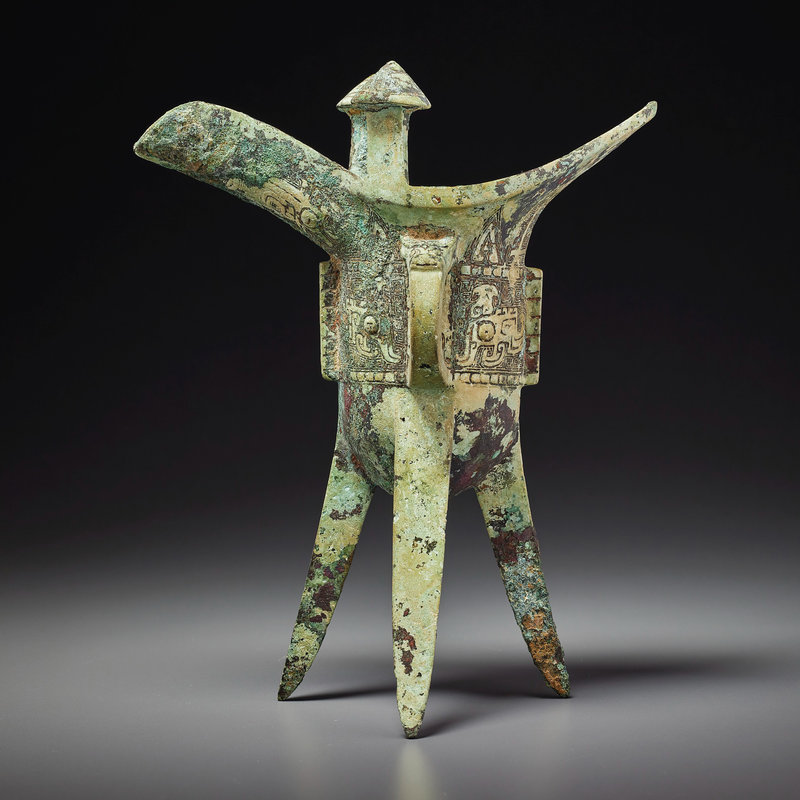 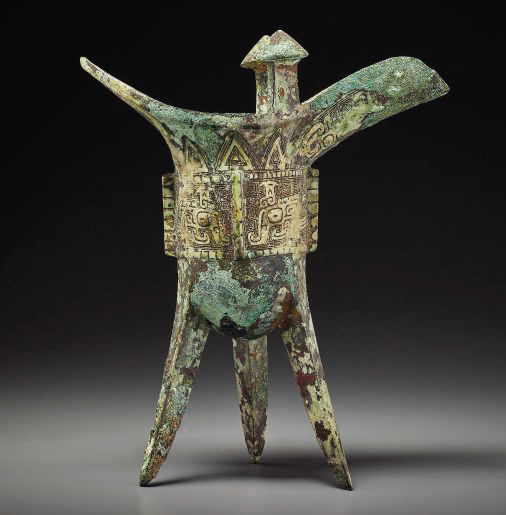 The deep, U-shaped body is raised on three blade-like legs and is decorated with two pairs of kui dragons on a leiwen ground, one pair centered on a narrow flange, the other on an inscription, X Fu Xin (X Father Xin), cast beneath the curved handle surmounted by a buffalo head.

Note: It is very rare to find a Shang jue decorated with distinctly rendered kui dragons, such as those decorating the main band on the current jue. Typically, the kui dragons depicted on Shang jue have dissolved features, which allow them to more readily suggest taotie masks when two are shown confronted. Similar bottle-horn kui dragons can be seen on a  pair of larger (21.6 cm.) jue from the tomb of Lady Fu Hao, Anyang, Henan province, illustrated in Zhongguo Qingtongqi Quanji - 3 - Shang, Beijing, 1997, nos. 3 and 4. The vessel with bulbous body is inlaid in copper wire on the sides and the foot with bands of stylized dragon scroll, and applied on the shoulders with a pair of taotie mask handles suspending loose rings.

Note: The development of metal inlay in bronzes of the early Warring States period, circa 470-circa 370 BC, is discussed by Jenny So in Eastern Zhou Ritual Bronzes from the Arthur M. Sackler Collections, vol. III, New York, 1995, pp. 46-9. So illustrates two early fifteenth-century bronze pear-shaped hu with inlaid scroll patterns similar to those on the present example. The first, fig. 71, is a gold-inlaid example in the Cleveland Museum of Art with bands of dissolved dragon pattern, and the second, fig. 74, in the Royal Ontario Museum, Toronto, is inlaid with copper and turquoise with bands of abstract stepped patterns. Also illustrated, fig. 73, is a bronze cylindrical cup and cover of comparable date, in the Avery Brundage Collection, Asian Art Museum of San Francisco, which has lost most of its inlay, but what inlay (possibly copper) does remain in the bottom register illustrates how tightly packed metal strips were used to fill the broad depressions of the design. The same technique of using tightly packed metal strips, instead of thick sheets, to fill the large areas of cast design, was also utilized in the decoration of the current hu.

Like the current vessel, the hu in the Royal Ontario Museum is decorated just above the ring foot with a register of heart-shaped motifs. So illustrates, ibid., p. 48, fig. 75, a fragment of a clay model with similar design recovered from Houma Niucun, providing evidence that Houma was likely a manufacturing center of these inlaid bronzes. The garment hook is cast in the form of a mythical beast mask resembling a tiger, the eyes inlaid with glass and the forehead inset with a circular creamy white hardstone. The tapering hook rises from the top of its head and terminates in a chilong-form head. The underside has a circular button.

Exhibited: Exhibition of Belt Buckles, Chinese Art Society of America at China House, 1951 (according to label in box). 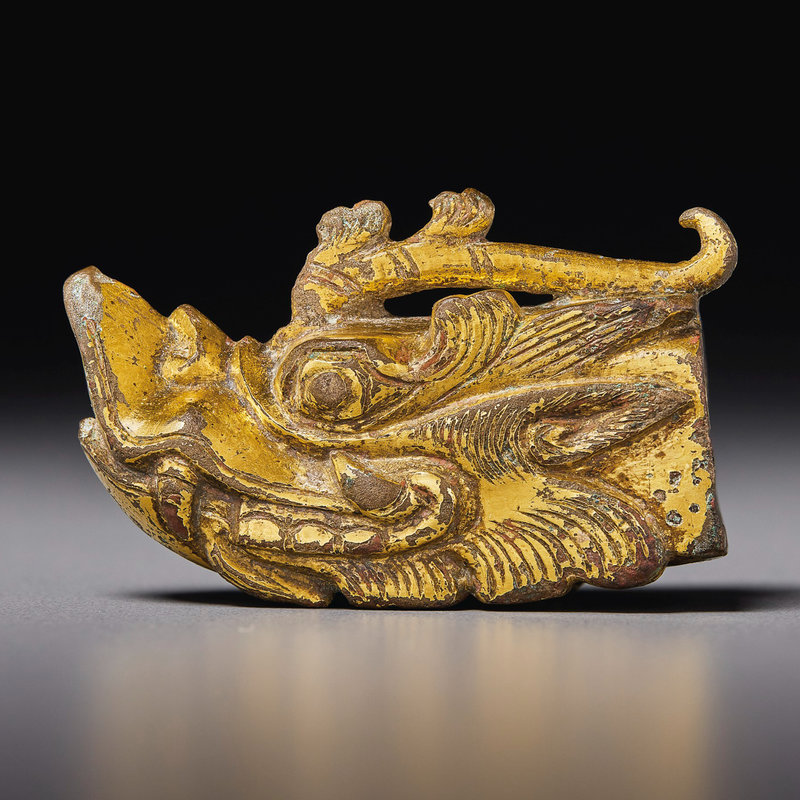 The garment hook is cast in the form of a mythical beast mask resembling a tiger, the eyes inlaid with glass and the forehead inset with a circular creamy white hardstone. The tapering hook rises from the top of its head and terminates in a chilong-form head. The underside has a circular button.

Note: Dragon-head fittings such as the present example were thought to have adorned furniture, chariots, and boats, as evidenced by several examples of paintings and furniture adorned by gilt dragon-head fittings. A handscroll of the Classics of Piety by the Southern Song Emperor Gaozong (1127-1162), with illustrations attributed to Ma Hezhi (active 1130-1170), shows the emperor seated in a carriage fitted with dragon-head terminals. Gilt dragon-head fittings continued to remain popular decorative elements on imperial furnishings, as can be seen on Emperor Qianlong’s folding armchair (see Sarah Handler, “The Elegant Vagabond: The Chinese Folding Armchair,” Orientations, January 1992, p. 95, figs. 13-14).

There are a few recorded Tang-dynasty dragon head-form fittings in a variety of mediums which are stylistically similar to the present fitting. A very similarly depicted dragon head, but in jade, in the Xi’an Antiquities Protection and Archeological Institute, was excavated from Qujiang village in Xi’an, Shaanxi province, and was thought to have been a fitting from a royal boat. See Gilded Dragons: Buried Treasures from China’s Golden Ages, British Museum, London, 1999, no. 54. The Qujiang jade dragon head is very similar to one also the collection of Stephen Junkunc, III, that was offered at Christie’s New York, 13 September 2019, lot 830. Another stylistically similar jade dragon-head fitting (24.7 cm.) dated to the 9th-10th century, in the collection of Mr. and Mrs. Desmond Gure, is illustrated by Daisy Lion-Goldschmidt and Jean-Claude Moreau-Gobard, Chinese Art: Bronze, Jade, Sculpture, Ceramics, New York, 1960, pl. 82. For an example in pottery, see the Tang-dynasty architectural sancai-glazed dragon-head fitting illustrated in The Masterpieces of Yaozhou Ware, Museum of Oriental Ceramics, Osaka, 1997, no. 1. For an earlier gilt-bronze example dating to the Six Dynasties period (AD220-589), see the dragon-head fitting of larger size (13.4 cm.) sold at Sotheby’s London, 12 December 1989, lot 116.