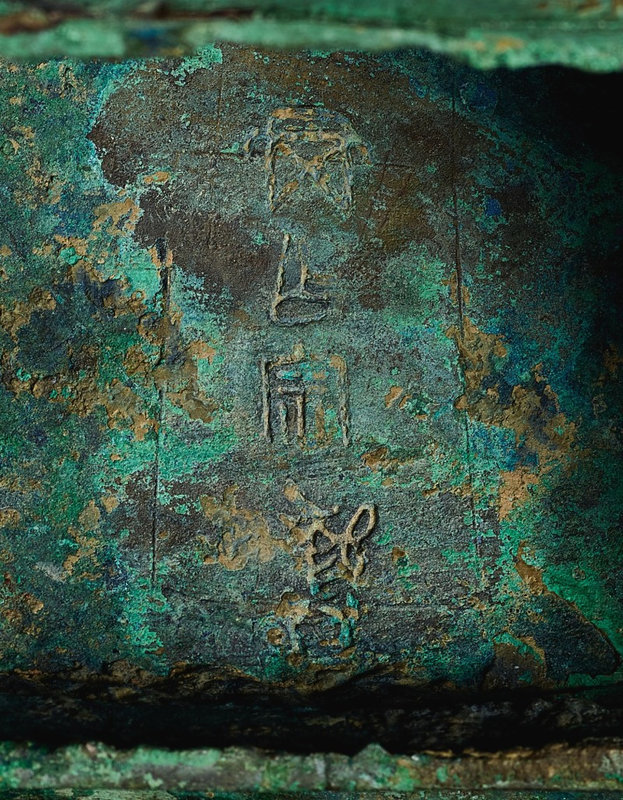 of rectangular section with wide shoulders tapering towards the tall, splayed foot, the straight neck decorated with two bow-string bands, supporting a high-domed trapezoidal cover of conforming outline surmounted by a similarly shaped finial atop a square-sectioned post, the base of the cover and the shoulders encircled by a band of raised circular whorls, the sides flanked by a pair of loop handles issuing from bovine heads, with an additional handle on the front set just above the foot, the interior of the cover cast with a four-character inscription reading Ran zuo zong yi, translating to 'Ran made this ritual vessel', Japanese wood box.

Note: This fang lei is exceptional for its sharp and angular form as well as its simplicity in design. Vessels of this type existed as wine containers for only a short period of time from the late Shang (c. 1600-1046 BC) to early Western Zhou dynasty (1046-221 BC). The handle on the lower part of the body would have been held to tilt the vessel as its contents were being poured or ladled out.

Compare two similar but larger fang lei; one decorated with masks and whorls on both the shoulder and cover, flanked by a more elaborate pair of handles and lacking a foot, from the Avery Brundage Collection in the Asian Art Museum, San Francisco (acc. no. B60B1053); the other, decorated on front and reverse of the shoulder with a mask between two whorls, illustrated in Umehara Sueji, Shina-kodo seikwa, part 1, vol. 1, Osaka, 1933, pl. 48, preserved in the Abteilung für Ostasiatische Kunst, Staatliche Museen, Berlin. See also a closely related vessel, lacking one circular whorl on each side of the cover, sold in these rooms, 20th March 2012, lot 16.