the deep rounded body supported on three cylindrical legs, the lipped rim with two large upright loop handles, the body cast with three large taotie masks with bulging eyes intersected by vertical flanges, all against a fine leiwen ground, below a band of six serpents interspersed with whorl-roundels in relief, the legs with scrolls and pendent cicadas all in intaglio, the interior cast on the side with a six-character inscription, the vessel with an attractive olive patina with areas of malachite encrustation.

Note: Shang dynasty bronze inscriptions longer than three or four characters are extremely rare. This exceptional ding vessel is cast with a six-character inscription reading Quan zuxin zugui Xiang, written in a vigorous manner that exudes the beauty of the ancient pictographic characters. The present vessel is most remarkable, however, for the content of its inscription. The inscription identifies that Quan was the person who commissioned the vessel, and zuxin and zugui were the ancestors to whom ritual offerings were made. The last character, xiang, should be a clan emblem, which can also be seen on other Shang bronzes. The quan (dog) character on Shang dynasty bronzes may refer to the title of an official responsible for organizing hunts, who also participated in warfare (see Chen Mengjia, p. 514); it may also be the name of a clan, in which case the owner the present ding would have belonged to the Quan clan, with its related clan being Xiang (see Yan Zhibin, p. 296).

Ding are among the most significant ritual vessels associated with authority and supremacy. Owners of ding were of elite social status, such as high officials or clan leaders. Late Shang dynasty oracle bone inscriptions record a person named Quan Hou, who was an important noble of the period. Quan Hou was likely a senior military leader who had served in the Shang king’s conquest of the enemy tribes. Ding Shan suggests that Quan Hou was the houya, a minister of the Shang inner court (see Ding Shan, p. 116). Yan Zhibing has further proposed that Quan Hou was in fact the leader of the Quan clan (op. cit., p. 116).

Yang Shuda identifies the Quan clan as the people alternately referred to in the historical record as Kunyi or Hunyi, and as Quanyi or Quanrong (see Yang Shuda, p. 62). Liu Huan, who shares the same opinion, has furthermore demonstrated that Quanrong was also called Xianyun (see Liu Huan, pp 3-4). The name Quanrong is well known from the famous story of King You of the Western Zhou dynasty ordering beacon towers lit and panicking the nobles simply to make his concubine Baosi laugh. According to ‘Zhou Benji’ [Annals of Zhou] in Shiji [Record of the Historian], ‘King You elevated Guo Shifu to the post of minister … causing grievance throughout the populace … King You also demoted Shen Hou (Queen Shen)… Shen Hou (Marquis Shen), incensed, aligned with the state of Zeng and the western Quanrong to attack King You. King You had beacons lit to summon his troops, but the troops did not come. Shen Hou then killed King You on the foothills of Mount Li.’ This battle resulted directly in the fall of the Western Zhou dynasty, signifying the importance of the Quanrong and the Quan clan in Chinese history.

Aside from the importance of its inscription, the present ding is notable also for its unusual combination of decorative motifs. The primary motifs are large taotie masks, and the neck of the vessel features serpent and whorl flame patterns. Such a combination is extremely rare, although a very similar vessel with the same decorative elements is known. See a bronze ding originally in the Qing imperial collection, included in Xiqing Gujian [Xiqing catalogue of ancient bronzes] (fig. 1), and later entered the collection of Wu Dacheng (1835-1902), who transcribed its inscription in his Kezhai jigu lu [Kezhai’s compendium of ancient bronzes] and reproduced a full-figured rubbing of it in his Kezhai jigu tu [Kezhai’s illustrations of ancient bronzes], published in Zhou Ya, ed., Kezhai jigulu jianzhu [Annotated edition of Kezhai’s illustrations of ancient bronzes], Shanghai, 2012, p. 54. Other comparable vessels usually feature the more generic dragon patterns on the neck, such as one example excavated from a Shang tomb in Luoshan county, Henan, in 1980 and published in Wu Zhenfeng, Shang Zhou qingtongqi mingwen ji tuxiang jicheng [Compendium of inscriptions and images of bronzes from Shang and Zhou dynasties], vol. 2, Shanghai, 2012, no. 00884. Another example, in the collection of the Nelson-Atkins Museum in Kansas City, is published in Robert Bagley, Shang Ritual Bronzes in the Arthur M. Sackler Collections, Washington, D.C., 1984, p. 466, fig. 86.1. A third example, in the collection of the Fitzwilliam Museum, Cambridge, U.K., is published in The Institute of Archaeology, Chinese Academy of Social Sciences, ed., Yin Zhou jinwen jicheng [Compendium of Yin and Zhou bronze inscriptions], Beijing, 2007, no. 01085. 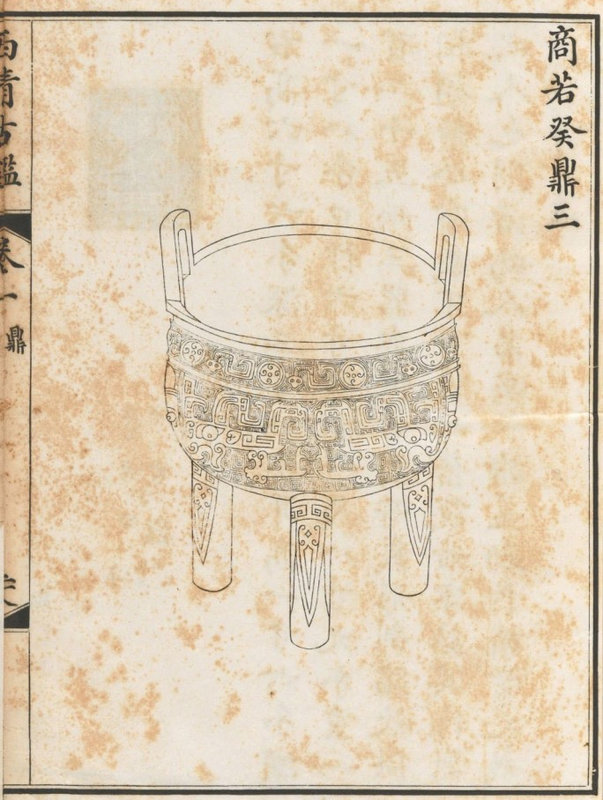