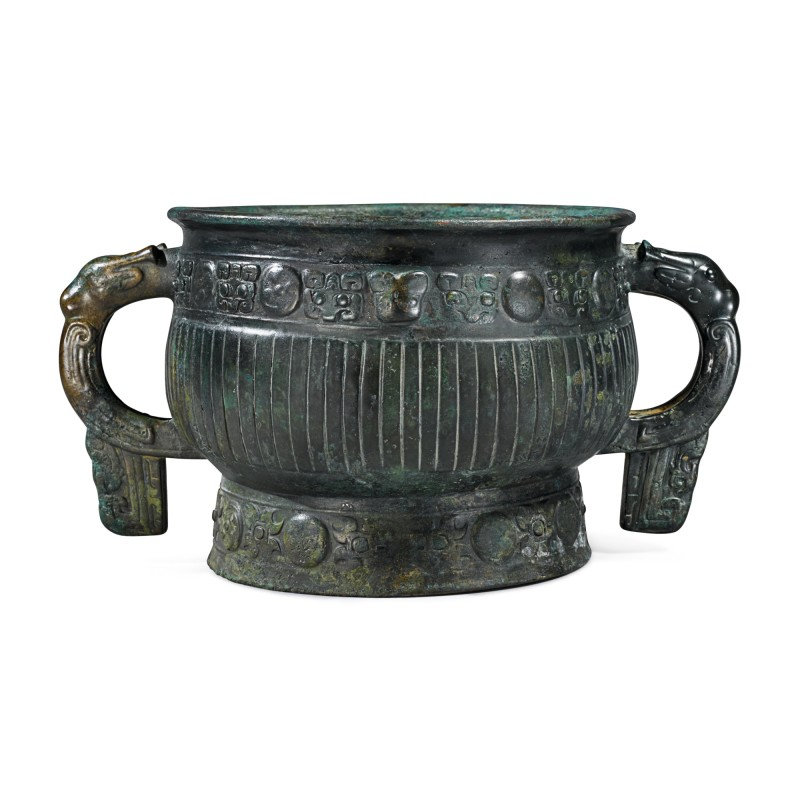 the deep rounded sides cast with a band of vertical ribs below a frieze of alternating mythical beast masks and whorls further separated by two horned mythical beast masks cast in high relief, the sides framed by a pair of D-form handles issuing from bovine masks and set with pendent tabs, all supported on a tall splayed foot decorated with a band of alternating tufted and circular whorls.

Note: The present gui is remarkable in its bold casting of the vertical ribs and its adaptation of long-established archaic motifs which trace back to cultures as early as the Erligang phase, as discussed by Robert Bagley in Shang Ritual Bronzes in the Arthur M. Sackler Collections, Cambridge, 1987, p.532. Bagley also suggests that these new ways of decorating gui vessels became increasingly prevalent in the Western Zhou dynasty.

The band of alternating mythical beast masks and whorl bosses around the shoulder of the present piece also appears on many bronzes from the Anyang foundries. See four closely related examples with dragons in relief in the upper register instead of mythical beast masks: one in the Arthur M. Sackler Collection, published in ibid., pl. 103; another formerly in the Mount Trust Collection, illustrated in ibid., pl. 103.17.; the third sold at Christie's New York, 18th September 1997, lot 326; and the fourth is in the Los Angeles County Museum of Art, Los Angeles, (acc. no. M.75.111.2). Compare also a similar example excavated from a Western Zhou tomb in Gansu, illustrated in Wenwu, no. 12, 1972, pl. 3, fig. 4.