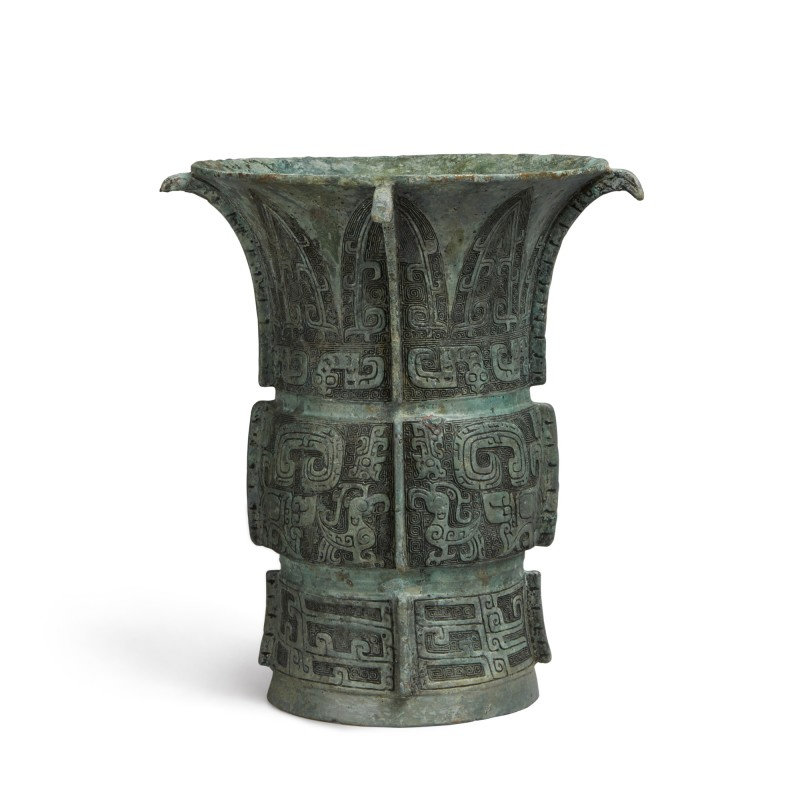 robustly cast of cylindrical form, the waisted vessel with flared pedestal foot and wide trumpet mouth, punctuated by four evenly spaced prominent vertical flanges that extend past the rim, crisply cast in relief with a pair of large taotie masks and confronting birds around the slightly bulging mid-section, below a register of coiling snakes followed by upright cicada-form blades at the neck and mouth, the tall foot with a band of stylized scrolls, all reserved on a fine leiwen ground, inscribed to the interior with a six-character inscription reading Ce zuo fu gui zun yi ('Ce made this precious vessel for father Gui'), the patina of mottled green hues.

Note: This bronze vessel is particularly impressive for its striking flanges which extend beyond the mouth rim and the rich decoration crisply cast all over its voluminous body. Zun were used as ritual wine containers and were made either with angular shoulders or of beaker shape, such as the present piece. Vessels of the present form grew in prominence during the second half of the Shang dynasty (c. 1600-1046 BC), gradually replacing the shouldered type.

Compare two similar examples in important collections, both with a slightly more slender body and lacking the central cicada blade on each side of the neck. One is preserved in the Shanghai Museum, Shanghai, included in the exhibition Ancient Chinese Bronzes in the Collection of the Shanghai Museum, Hong Kong Museum of Art, Hong Kong, 1983, cat. no. 11; the other from the Pillsbury Collection, illustrated in Bernhard Karlgren, A Catalogue of the Chinese Bronzes in the Alfred F. Pillsbury Collection, Minneapolis, 1952, pl. 39, is now in the Minneapolis Institute of Art (acc. no. 50.46.101). See also a larger zun, with the same number of blades on the neck but without an inscription, sold at Christie’s London, 25th March 1974, lot 85.

A distinguished Italian diplomat, Francesco Maria, Marchese Taliani de Marchio (1887-1968), Grand Officer of the Italian Crown, Commander of the Order of St. Maurice and Lazarus, and Commander of the Order of Pius IX (Ordine Piano), was most notable for his role as Ambassador to China from 1938 to 1946 during World War II. During his appointment to China, Francesco Taliani actively collected and purchased works of art from dealers in Shanghai and Beijing.

He was sent to China in 1938 as Ambassador to the Nationalist Government of Chiang Kai-shek in Nanjing, and witnessed first-hand the Second Sino-Japanese War. In this capacity, he was recognized by the Japanese puppet government under Wang Jingwei. On 8th September 1943, refusing to swear allegiance to the Italian Social Republic, he and his wife, the Archduchess Margaretha d'Austria Toscana (1894 - 1986), were imprisoned by the Japanese in a concentration camp near Shanghai, where they remained for two years until the war came to an end. After the war, the new government of Alcide De Gasperi reconfirmed his role as Ambassador to China until 1946, when the couple returned to Italy and Taliani was subsequently appointed the first Italian Ambassador to Spain in 1951.