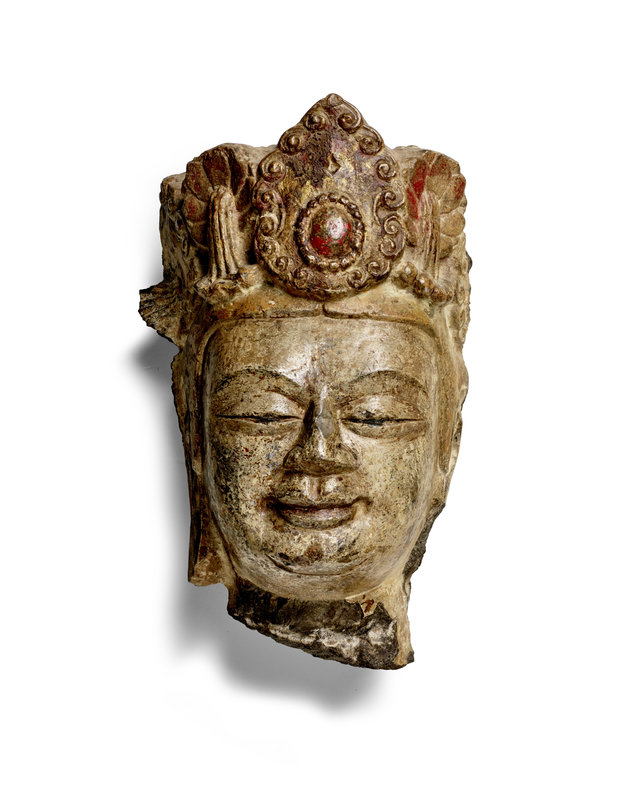 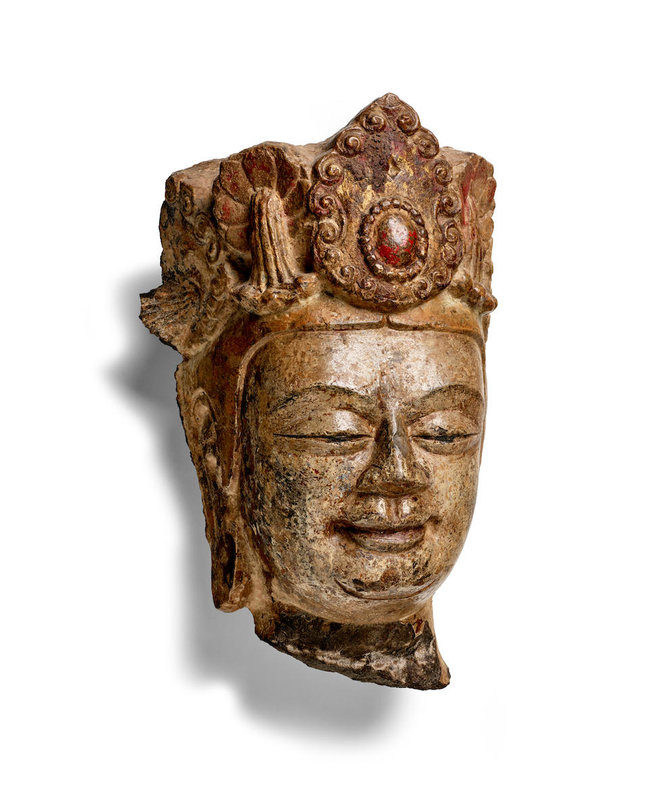 The squared face showing crisp brows, elongated eyes with heavy lids, a long triangular nose with wide nostrils and a subtle smile issuing from thick lips, all below a high crown fronted by an oval jewel-centered plaque with raised scroll borders set between rosettes issuing beaded tassels and terminating in a smaller jewel plaque with raised scroll borders partly visible above each pendulous ear; the finished surfaces showing traces of gilding, red and ochre pigments, the back and top of the head roughly finished.

Note: Late sixth century China was marked by some of the shortest dynastic reigns in its history: the Northern Qi (550-577) in the northeast, with its capital at Ye (present day Linzhang) in southern Hebei; the Northern Zhou (557-81) in the northwest, that defeated the Northern Qi in 577, its capital located at Chang'an (present day Xi'an), Shaanxi Province; and the ensuing Sui dynasty (581-618), also with its capital at Chang'an, that unified China again after centuries of disunity. The differing trends in Buddhist sculpture developed within these kingdoms all left some mark on the Alsdorf bodhisattva head.

The roughly finished surfaces on the top and back, as well as its large overall dimensions, suggest that the Alsdorf head once topped a standing or seated bodhisattva of impressive size, carved in high relief as part of a Buddhist assembly, on a cave temple wall or a hillside. The sculpture's most distinctive feature is the tall crown with jeweled plaques and tasseled rosettes carved in detail and highlighted with polychrome pigments. A very similar crown appears on three stone bodhisattvas thought to have been carved during the last years of Northern Qi rule, but removed in the early 20th century from one the seven southern caves in the Buddhist shrine complex at Xiangtangshan, Hebei Province, near the capital city Ye. The first is a free-standing head of large size (15in [38.1cm] high) in the Metropolitan Museum of Art, the body no longer preserved (see Denise Patry Leidy and Donna Strahan,Wisdom Embodied: Chinese Buddhist and Daoist Sculpture in the Metropolitan Museum of Art [Yale University Press, 2011], cat. no. 10c, p. 81). The second, a life-size free standing figure (67in [170.2cm] high) in the Richmond, Virginia Museum of Fine Arts, may have come from Cave 1 of the southern group (see Katherine R. Tsiang, Echoes of the Past: the Buddhist cave temples at Xiangtangshan [University of Chicago Press, c.2010, cat. no. 19, pp. 202-203).The third, a free-standing head of the bodhisattva Mahasthamaprapta (14 3/16in [36cm] high), in the Freer Gallery of Art, the body no longer preserved, possibly from Caves 4-6 (see also Tsiang [et al.],Echoes of the Past, cat. no. 30, pp. 224-225).

The three bodhisattva heads associated with the Xiangtangshan site also share an elongated ovoid shape, accentuated by a narrow nose separating the graceful arching brows and downcast eyes from the full, voluptuous lips. These details are carefully carved with a fine surface finish that extends onto the sloping shoulders and columnar body of the complete standing bodhisattva from the Virginia Museum of Art. Their aura of sophistication and superior quality of execution might be explained by its location close to the Northern Qi royal capital. The Northern Qi rulers were ardent patrons of Buddhism, known to have commissioned some of the northern cave temples at Xiangtangshan as well as filling temples throughout the kingdom with consummately carved Buddhist images.

In contrast, the Alsdorf bodhisattva shows a head of blocky shape emphasized by its wide triangular nose and a wide, square jaw. The elongated eyes gazing directly forward and the faint smile on the fleshy lips also add to the certain naïve quality of its conception. The facial features and the crown are also carved in a more summary manner, accenting its difference from the Xiangtangshang crowned heads. Although missing its body, the Alsdorf head shares the thick facial features and blocky head characteristic of complete sculptures found within the purview of the Northern Zhou kingdom. Two such examples are the two standing stone figures of the Sakyamuni Buddha preserved at the Xi'an Museum when Osvald Siren published them in 1925 (see Chinese Sculpture from the Fifth to the Fourteenth Century [London, E. Benn, 1925], vol. 1, p. 72, and vol. 3, plate 270a and b, heights given as about 6 and five feet). Their faces even display a subtle smile visible of the Alsdorf head.

The third figure of interest is a Northern Zhou seated Maitreya bodhisattva of impressive size (about 2 meters tall) in the Beilin Museum, Xi'an, carved from the yellow limestone often encountered in Shaanxi sculpture (see Angela Falco Howard [et al.], Chinese Sculpture [Yale University Press, 2006], p. 280 and p. 287, fig.3.91). Although showing the ravages of age, the figure shows a high level of craftsmanship. The square head leaning slightly forward from its compact, thickset body is sensitively rendered with a suggestion of a smile on the otherwise pensive visage. The tall curving crown differs in shape from that of the Alsdorf head and shows a higher level workmanship in the execution of its intricate raised relief, The crown on the Maitreya bodhisattva instead conforms to a crown of similar shape but higher raised relief resting on the head of a massively sized bust of a bodhisattva (height 36 5/8in [93cm]) excavated in 1986 at Liquansi, Xi'an (see James C. Y. Watt [et al.], China: Dawn of a Golden Age, 200-750 AD [Metropolitan Museum of Art, Yale University Press, 2004], cat. no. 171, p. 270). The intricate and carefully chiseled high relief on the crown continues across the remaining surfaces of the Liquansi bust, again proof of the highest quality of craftsmanship capable in the capital of a kingdom. In fact, when complete, the Liquansi deity might have stood 8 feet tall, suggesting that it could have been carved in the opening years of the Sui dynasty when colossal figures of this type were produced.

In the end, the Alsdorf bodhisattva head remains an enigma –a blockish head with a naïve smile of Northern Zhou type wearing a crown of sophisticated Northern Qi type. Professor Howard notes that many caves were opened and independent images carved within that vast expanse of the Northern Zhou kingdom that stretched as far as Ningxia, Gansu and Sichuan (see Howard [et al.], Chinese Sculpture, p. 279.) The workmanship on the Alsdorf head may not reflect a commission by wealthiest of patrons the royal capital of Xi'an. However, given the over life size scale of the Alsdorf head, a complete seated figure of comparable size for it might have been at least four feet in height while, a complete standing figure in the range of six feet or taller. As such the complete sculpture must have been a monument of impressive size and considerable expense, commissioned somewhere away from the capital by single donor or a community of faithful.