NEW YORK, NY.- Whether it’s a contemporary ceramic vessel created by a National Treasure from Japan, an ink drawing by a young emerging artist from China or an ancient tribal mask from Borneo, Asia Week New York never disappoints with its amazing bounty of Eastern treasures. Starting September 17th through October 1st, 23 international galleries will present their exhibitions online at www.asiaweekny.com or in their New York galleries (by appointment or check for hours) with six auction houses–Bonhams, Christie’s, Doyle, Heritage, iGavel, and Sotheby’s mounting their respective sales.

Organized by category, here is a round-up of the highlights at the galleries:

Portrait of a standing nobleman is one of four Indian miniature paintings offered by Oliver Forge and Brendan Lynch, Ltd. This Mughal drawing, circa 1660-80, with opaque watercolor and gold on paper, in a reduced album page with a specimen of calligraphy on the reverse–depicts an unidentified nobleman wearing a traditional court costume of simplified form, which indicates his status as a nobleman rather than a prince. Online only. Untitled (Isabelle in Black Dress), by Paritosh Sen, is part of an exhibition called The Wonder of India: Explorations through 19th and 20th Century Art on view at DAG’s New York gallery. In 1981, Paritosh Sen was invited to be a visiting professor at the Maryland Institute of Art, Baltimore. His Isabelle series came from his time there, witnessing and depicting the violence of racism in the USA. Possibly modeled on one of his students, Isabelle is a beautiful, remote figure lost in thought while seemingly confined to her home. She is painted as a classic, unattainable female figure, seeing and dismissing a thousand mythologies springing about her. Online only. This portrait of Fath ‘Ali Shah from the William Fraser Collection at Francesca Galloway –executed in Delhi between 1815-1820 for William Fraser–is painted on identical paper to a contemporary portrait of the Mughal Emperor Akbar II, also commissioned by Fraser. Both portraits are similarly framed and bear his inscriptions on the back of the frame. This presupposes the existence of a Qajar portrait of Fath ‘Ali Shah in Delhi at this time. Online only. Taking center stage at Kapoor Galleries is Lalita Maha Tripura Sundari, circa 1810, an opaque watercolor, enhanced with silver and gold on paper. The majesty of this supreme shakti is perfectly captured by this finely decorated Pahari composition. Her beauty, as her name indicates, transcends the vast Tripura (three demon citadels) within which she is believed to have defeated many demons. 34 East 67th Street, call for hours, 212-794-2300. The showstopper at Thomas Murray is an exceptionally rare and important 19th century gold Mamuli heirloom ear ornament from Sumba, an eastern Indonesian island which excelled at their creation. The ornaments are symbolic of women as the giver of life. This piece is balanced with “male” goats, which brings about a cosmic harmony and symbolize wealth and prestige. Online only. Akar Prakar presents Krishna on a swing made of Gopinis, a limited edition black and white woodcut print which depict scenes from Indian mythologies with the gods and goddesses as part of the visual narrative and showcases the remnants of a lost art form from 19th century Bengal, which became obsolete because the traditional artisans and printings presses no longer exist. Online only. Newcomer Fu Qiumeng Fine Art, which specializes in contemporary Chinese painting, presents works by Tai Xiangzhou. In Celestial Chaos - The Supreme Good is like water, the artist retells the history of Chinese landscape representations by delving into their origins in classical cosmology, particularly its elaborate systems of correspondence between the celestial, terrestrial, and human realms, he further expands his perspectives of art creations into cosmology, astrology, and how they intertwine with the aesthetics of painting. 65 East 80th Street, for gallery hours, phone 646-838-9395. Ralph M. Chait Galleries is offering a superb Chinese blue and white porcelain baluster vase from the Kangxi period, circa late 17th century. Decorated along the exterior with a scene from a classic tale with military figures conversing, situated on a draped terrace of a palace, with a Court lady waiting outside the meeting, this piece is a combination of beautiful form, exquisite color of the blue, impressive historic decoration, and notable Western provenance from a private American collection. 16 East 52nd Street, 10th floor, for gallery hours, phone 212-397-2818. Zetterquist Galleries is pleased to debut the ceramic work of Ipek Kotan, a ceramist whose love of the vessel form stems from a visceral need to create with her hands using natural materials. This ubiquitous form, still one of the most essential in daily life even after 30,000 years since its invention is for her the embodiment of timelessness, endurance, and the universality of the human experience. This burnished porcelain ceramic sculpture with its glazed interior is an excellent example of her work. Online only. At Kaikodo LLC, expressive, energetic brushwork brings to life a conversation between a Confucian and a Buddhist gentleman in a fan-shaped painting by the Japanese priest-painter Shabaku, active during the late 15th-early 16thcentury. Images of such philosophical dialogues painted by Chinese artists, including the spontaneous renderings of Chan painters, were among the treasures brought back to their home temples by Japanese monks after study on the mainland. Online only. Featured at The Art of Japan is a rare fan print of two beauties amid a swirl of rich multi-colored fabrics, by Gountei Sadahide (1807-79). The fabrics swirling about the two bijin make this a rather unique design. An Utagawa school artist, Sadahide was best known for his Yokohama prints of foreigners who inhabited Yokohama after Admiral Perry opened Japan to the West. Most of his fan prints were typical of the Utagawa school. Online only. Dai Ichi Arts, Ltd., will present a Shino Flower Vessel, by Suzuki Osamu, designated a Living National Treasure in 1994 and recognized for his revitalization of the Shino glaze techniques The milky pattern over this red underglaze draws attention to the illusory qualities of Shino techniques: the surfaces of his works have a milky smooth quality to them that evokes surfaces of stones that have been eroded over time by their surroundings. 18 East 64th Street, by appointment. Egenolf Gallery Japanese Prints is featuring landscapes from the early 20th century, mostly by the perennial favorite Kawase Hasui (1883-1957). Rain at Omiya (Miya no ame). From the first limited edition, this print conveys a rainy evening in a peaceful village in Saitama prefecture. The rain is done in a fine silver/white, and falls straight down, indicating that there is no wind at all. This work represents the unbeatable caliber of prewar Japanese printmaking and two of Hasui’s strongest subjects: evening and rain. Online only. At Ippodo Gallery, Crescent Moon, by Ken Matsubara, captures the essence of Japanese aesthetics while using traditional techniques and advanced and technical anomalies. Featured worldwide from the Tokyo Metropolitan Art Museum to Paris and Cologne, Ken Matsubara is an exemplary artist whose paintings are serene and yet dynamic. Each painting represents a return to nature. He conscientiously considers nature and Japanese roots in his work, such as collecting natural elements, pigments, and materials to produce his paintings. 32 East 67th Street, by appointment. 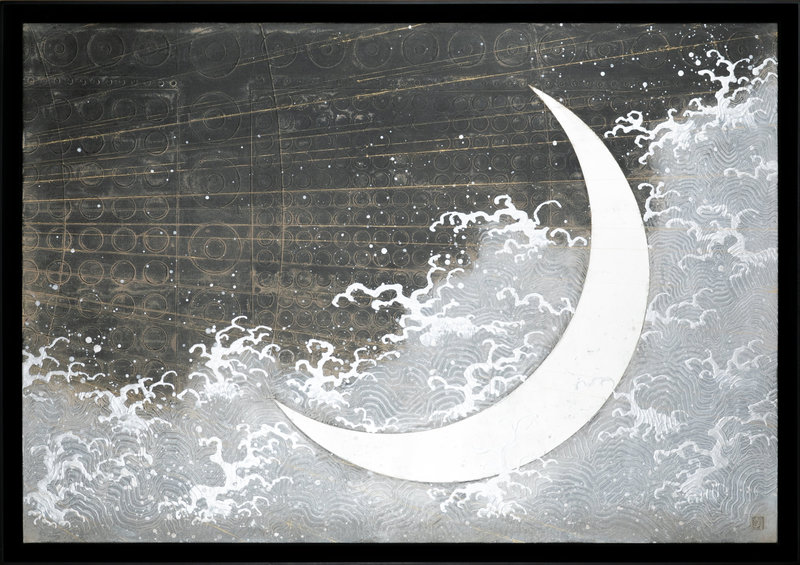 Evening Cool at the Iseya Teahouse at Sebastian Izzard LLC Asian Art tells the story of a lovely courtesan on a summer evening languidly looking down at the sparklers that her assistant has laid afloat onto a river. They are on a platform built over the water at the Iseya. These platforms over water were popular restaurant extensions for clients relaxing during the heat of the summer months. 17 East 76th Street, 3rd Floor, by appointment. Onishi Gallery features Mokume-gane Vase 050, 1996, a stunning hammered silver, copper and shakudo by Tamagawa Norio, a Living National Treasure, renowned for his unique metal-hammering technique, Mokume-Gane (wood-grain metal). He uses about twenty different metal alloy plates in his work and each plate illuminates a different color which makes his work both colorful and playful. His crafting process begins by layering and fusing the metal plates together to create one solid block, and the billet is then hammered flat. 521 West 26th Street, by appointment. Saruhashi Bridge in Koshu Province, 1931 by Takahashi Shotei stands out at Scholten Japanese Art. This is a rare snow scene produced in collaboration with the publisher Fusui Gabo, with whom Shotei made some of his most accomplished, although rare, woodblock prints. 145 West 58th Street, Suite 6D, appointment appreciated.

This powerful Hobi Bamboo tray-style flower basket from 1940 is a major piece at TAI Modern. Not only is it an excellent example of this artist’s work but also represents the work of this period. It is constructed from hobichiku (phoenix tail bamboo), centuries-old smoked dwarf bamboo taken from the ceilings of traditional farmhouses. Ueda split these precious bamboo culms vertically into quarters, plaited them randomly, and then bent them in a round shape to accentuate the beauty of the material. He carefully dyed a section of whole madake (timber) bamboo with prominent nodes to create an imposing handle. Ueda’s fine rattan work connecting the handle is a nice counterbalance to the scale and relaxed informal plaiting of the tray. Online only. Thomsen Gallery will present the work of Minol Araki, who pivoted from being an electronic designer to a full-time artist. A key turning point in his artistic formation was a meeting in 1973-when he was already in his forties-with Zhang Daqian (1899-1983), the charismatic itinerant master painter, master forger, and one of the most influential figures in the twentieth-century pictorial art of East Asia. Araki became friendly with the elderly genius and with Zhang's encouragement intensified his efforts to carve out a distinctive individual style expressed in dynamic splashed-ink technique, occasionally enhanced by the addition of color, sometimes sparing, sometimes lavish and striking. His atmospheric landscapes and plant paintings, never for sale during his lifetime, were widely exhibited in Taiwan, Hong Kong, and the United States and have recently been acquired by several leading American museums. 9 East 63rd Street 2nd floor, by appointment. Hiroshi Yanagi Oriental Art presents a rare 17th century Fusuma, made in the Edo period. Used to separate rooms in a Japanese home, these 4-panelled sliding doors are decorated beautifully with ink and color on heavy gold paper. Online only.

Koichi Yanagi Oriental Fine Arts is featuring Peonies in the Wind, by Itō Jakuchū (1716-1800). This painting, together with the painting of crabs on the reverse, are Jakuchū’s only known paintings affixed to a freestanding wooden single-panel screen, called a tsuitate in Japanese. Jakuchū, one of the most famous painters of the Edo period in Japan, depicts a powerful wind gust blowing the peony flowers from the upper right downward to the lower left. The stormy weather is succinctly expressed by the looping brushstrokes depicting grasses on the ground and wind-swept peony flowers and stemlets that cling to the twisted thicker stems. 17 East 71st Street #4, by appointment. HK Art & Antiques Ltd presents Light on the Sea, an exhibition of paintings by Cho Taikho, who grew up on the coast of Korea. Fond of the many seascapes that he has encountered, his work captures the nuanced reflections of light cast on the water. This seascape titled Light 1, 2016, dated 2017, is one of the artist’s best works. Currently living in Paris, Cho’s work has been exhibited in New York, Seoul, and Paris. 49 East 78th Street, by appointment.