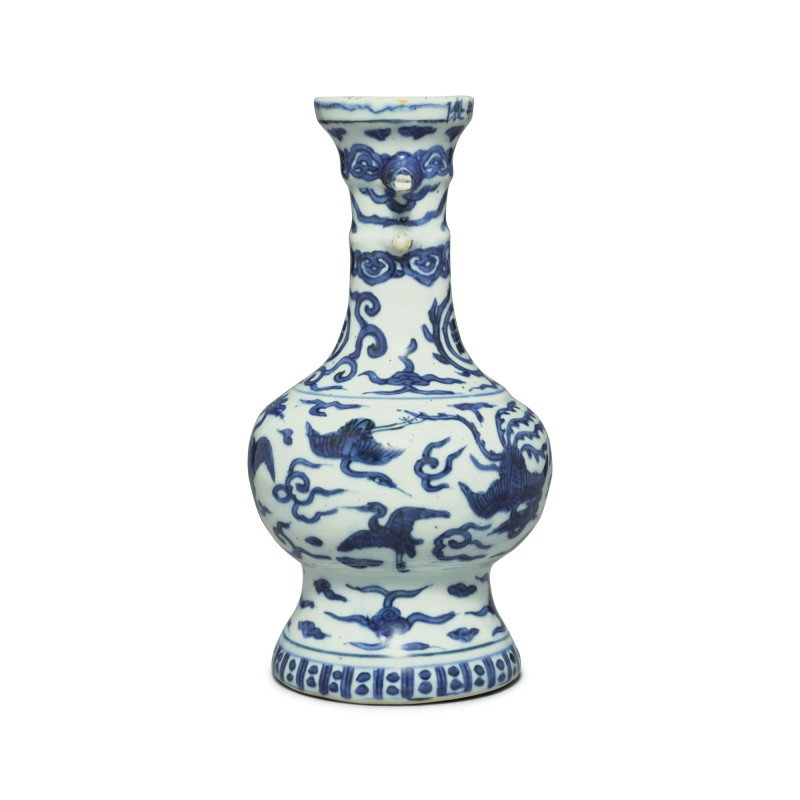 well potted with the slightly compressed globular body rising from a splayed foot to a tall cylindrical neck originally flanked by a pair of handles, painted in vibrant cobalt around the exterior with alternating pairs of phoenix and cranes flying amidst cloud wisps, all between further cloud motifs and lappets encircling the foot and 'trigram' roundels and bands of ruyi heads around the neck, the galleried rim inscribed with a six-character mark in a horizontal line.

Provenance: Acquired in New York in 1956, and thence by descent.

Note: The present vase belongs to a group of small blue and white vases which derived from larger Yuan and early Ming dynasty prototypes. For an example of a larger vase of related form made during the late Yuan dynasty, see Jessica Harrison-Hall, Ming Ceramics in the British Museum, London, 2001, pl. 1:42.

Blue and white vases of this type and size from the Wanli period appear to be particularly rare. There are, however, a few Jiajing examples recorded. See, for example, one in the Palace Museum, Beijing, illustrated in The Complete Collection of Treasures of the Palace Museum. Blue and White Porcelain with Underglazed Red (I), Hong Kong, 2000, pl. 89; and another sold at Christie's Hong Kong, 1st June 2016, lot 3320. Compare a further Jiajing vase of the same form but with a dragon design, formerly in the collections of the Higuchi and Yamauchi families, sold in these rooms, 23rd March 2011, lot 723.

Commentaires sur A rare blue and white 'phoenix and crane' vase, Mark and period of Wanli (1573-1620)