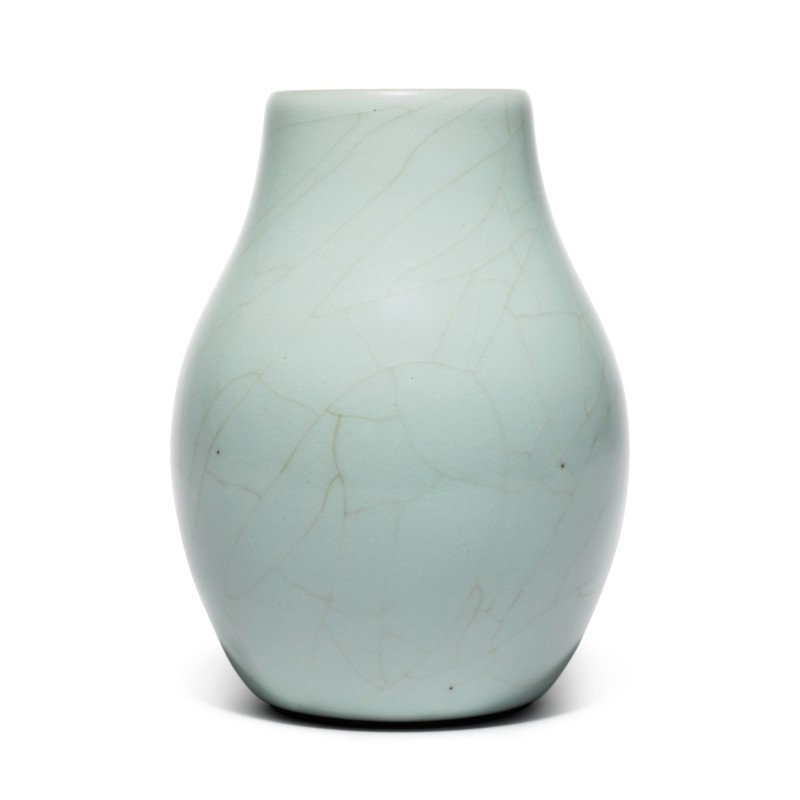 the tapered foot gently swelling into an olive-shaped body narrowing only slightly in the upward sweep of the neck, entirely covered in an unctuous pale blue glaze suffused with a network of craquelure, the foot dressed in a dark brown wash, the slightly recessed base with a six-character seal mark in underglaze blue.

Property from the Estate of Phyllis Rothschild Farley.

Note: Since its inception in the Southern Song dynasty (1127-1279), Guan ('official') ware has been one of the most coveted types of Chinese ceramics. The Qianlong Emperor (r. 1736-1795) was a great admirer of Guan wares and composed numerous poems lauding its beauty. Some of these poems were even inscribed onto Guan ceramics from his personal collection, as seen on two Southern Song bottle vases each inscribed on the base with an Imperial poem, now preserved in the National Palace Museum, Taipei, and included in the exhibition Obtaining Refined Enjoyment: The Qianlong Emperor's Taste in Ceramics, National Palace Museum, Taipei, 2012, cat. nos 30 and 31.

Aside from collecting and appreciating Song dynasty Guan wares, the Qianlong Emperor also commissioned Guan-type ceramics at the Imperial kilns in Jingdezhen, imitating the glaze and overall appearance of early Song vessels, but in 18th century forms and techniques. The present vase is a superb example of wares from this group. The vessel's unctuous, bluish glaze suffused with delicate golden-brown crackles faithfully imitates Guan glazes of the Song dynasty. Its white porcelain foot is stained brown to mimic the characteristic brown foot of Song stonewares, a feature derived from the purplish clay used during the Song period. The vase's rare and elegant form was devised in the Kangxi period (1662-1722), and was revived with minor variations in proportion during the Qianlong reign. Two similar Kangxi mark and period celadon-glazed vases from the Qing Court Collection, one with craquelure and the other without, are in the Palace Museum, Beijing, illustrated in The Complete Collection of Treasures of the Palace Museum. Monochrome Porcelain, Hong Kong, 1999, pls 127 and 129; another celadon-glazed Kangxi mark and period vase is in the National Palace Museum, Taipei (acc. no. 中-瓷-005559-N000000000). For Southern Song precedents of Guan vases, see a pear-shaped example in the Metropolitan Museum of Art, New York (acc. no. 26.292.81). Another, which rests on a tall foot and has a lipped rim, is housed in the Victoria and Albert Museum, London, and published in Rose Kerr, Song Dynasty Ceramics, London, 2004, pl. 93. Compare also a vase with cream-colored glaze, tall neck, and lobed walls, exhibited in The Special Exhibition of Sung Dynasty Kuan Ware, National Palace Museum, Taipei, 1989, cat. no. 53.

For related Qing dynasty Guan-type vases, see a Qianlong mark and period example of identical form to the present, formerly in the J.M. Hu Collection, included in the exhibition Qing Imperial Monochromes. The Zande Lou Collection, Shanghai Museum, Shanghai, 2005, cat. no. 35, and later sold in our Hong Kong rooms, 9th October 2012, lot 102 (fig. 1); another, from the collection of W.W. Winkworth, with a crackled glaze sold in our London rooms, 26th April 1966, lot 162, and again 12th December 1972, lot 149; two other vases from the Evelyn Annenberg Hall Collection, one with and the other without craquelure, sold at Christie's New York, 29th March 2006, lots 114 and 115. A Ru-type example sold in these rooms, 29th October 1991, lot 95, and later at Christie's Hong Kong, 2nd November 1999, lot 503, from the collection of Robert Chang. Lastly, a teadust-glazed example from the collection of the Hosokawa Clan was sold in our Hong Kong rooms, 7th October 2014, lot 3112 (fig. 2). 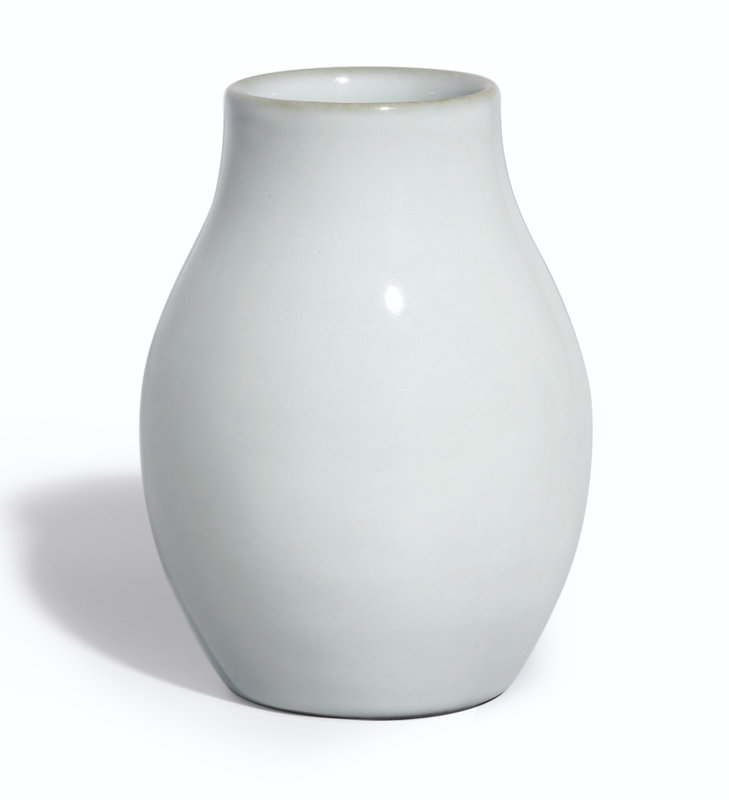 Solomon Solis Carvalho (1856-1942) was a General Manager and Editor-in-Chief of Hearst Newspapers. In February 1914, he had a sale of over 1,000 lots of Chinese porcelain at the American Art Galleries, New York, titled Beautiful Old Chinese Porcelains: The Extraordinary Private Collection of S.S. Carvalho. This vase was purchased by Simon F. Rothschild (1861-1936), president and chairman of the board at Abraham & Straus, a prominent New York City department store. The vase has remained in the family ever since, appearing now at auction for the first time in over 100 years.