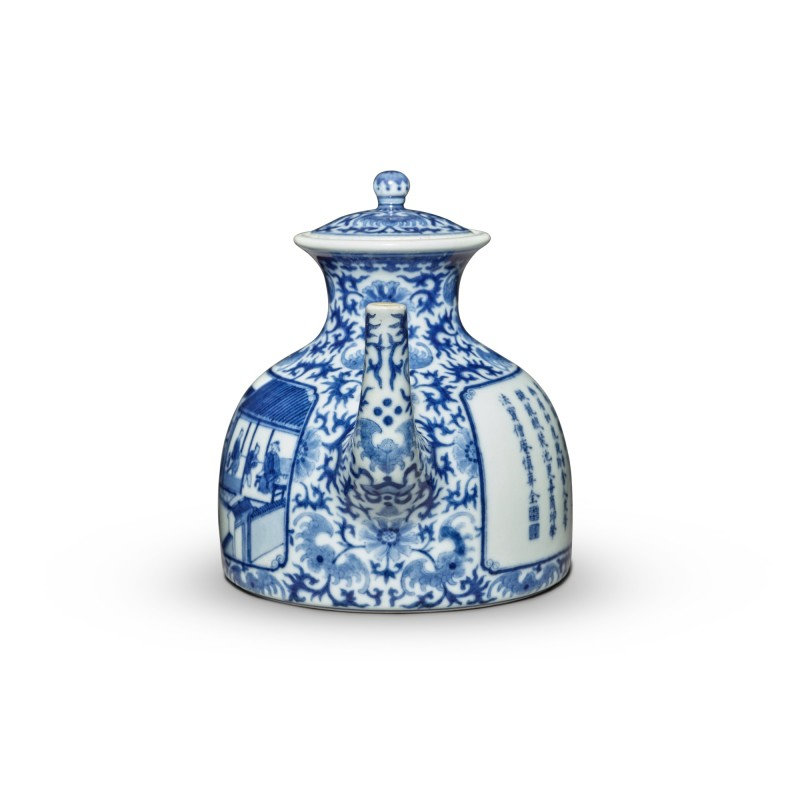 the domed body rising to an elongated waisted neck and flared rim, set with an upright curved spout opposite an elegant loop handle, each side with a rectangular panel enclosed within scroll borders, one panel finely painted with a scene of two gentlemen enjoying tea in a temple accompanied by an attendant near a brazier and a second attendant offering a scroll to one of the gentlemen, amidst a walled garden with craggy rocks and two tall pine trees, the moon gate revealing the horizon beyond, further trees peeking out from behind the garden confines, the other panel inscribed in kaishu with an eight-verse poem titled Brewing tea on the bamboo brazier at the Temple for Listening to Pines at Mount Hui inspired by the Ming verses and the paintings of Wang Fu, composed by the Qianlong Emperor and ending with two mock seals reading Qian Long, both panels reserved on a dense ground of stylized leafy arabesque scrolls interspersed with bats and flowers, the cover similarly decorated, the base with a six-character seal mark in underglaze blue.

Note: The Qianlong Emperor was a connoisseur of fine tea and is said to have composed over two hundred poems on the subject of tea preparation and enjoyment. The present teapot attests to the Emperor's fondness for the beverage not only through its function, but also in the image on one side of a gentleman being served tea in a pavilion, and in the Emperor's own poem on the opposite side titled Brewing tea on the bamboo brazier at the Temple for Listening to Pines at Mount Hui inspired by the Ming verses and the paintings of Wang Fu, followed by the eight verses of the poem itself and two seals bearing the Emperor's name. The poem was penned in 1751 when the Emperor made a special visit to Mount Hui, Wuxi, Jiangsu province, during his first Southern Inspection Tour. The location attracted him because the local spring was celebrated for its pure water that produced the finest quality tea, and because his grandfather, the Kangxi Emperor, had also visited the site, sipped tea brewed on the famed bamboo brazier, and gave his own poetry to be kept in a local pavilion. During his visit, the Qianlong Emperor read his grandfather's poetry as well as the poetry and paintings of scholars who came before him, who were also moved by Mount Hui's spring and the marvelous tea it produced.

Mount Hui's pure spring water was appreciated by scholars since the Tang dynasty (618-907), when it was recorded in the Chajing [The Classic of Tea] by Lu Yu (733-804), the highly respected ‘Sage of Tea,’ who ranked it second among all natural springs. Lu Yu also designed a metal brazier veneered in bamboo, known in short as the 'bamboo brazier' (zhulu), which was mentioned by the famous contemporary poet, Du Fu (712-770), in a verse reading 'Simple and easy, the lofty man's manner; a stove enclosed in wooden bamboo...' Thereafter, the bamboo-caned brazier became associated with high-mindedness and virtuosity, a connotation that was perpetuated by literati of the subsequent Song, Ming, and Qing dynasties.

In the Ming dynasty, Pu Zhen (zi, Xinghai) (fl. 1368-1402), the abbot at the Temple for Listening to Pines at Mount Hui, commissioned a bamboo brazier to be made for the temple. The contemporary Wuxi painter and progenitor of the Wu School, Wang Fu (1362-1416), contributed to the design of the brazier. The brazier itself became a celebrated artifact, and it was regularly commemorated in poems and paintings. Wang Fu himself painted a work in 1402 titled Brewing Tea on the Bamboo Brazier (Zhucha tu juan). This painting, along with Wang Da's (ca. 1368-1424) Preface to the Pure Songs to the Bamboo Brazier and Record of the Bamboo Brazier (both written in 1395), and poems by other contemporary literati were all mounted on scrolls and kept together at the Temple for Listening to Pines. Later scholars visiting the illustrious temple contributed to the canon of works celebrating the bamboo brazier and tea made from the spring's water. The scrolls containing these were compiled as the Compendium of the Bamboo Brazier (Zhulu tuyong).

In his visit of 1751, the Qianlong Emperor was served tea brewed on the bamboo brazier while he viewed the collection of paintings and poetry dedicated to it. Upon returning from the south, the Emperor ordered a replica of the Mount Hui retreat to be built in Yuquan Mountain near the Forbidden City and instructed his workshops to produce a copy of the original Ming dynasty bamboo brazier with an imperial poem (dated 1751) inscribed to the base. It now resides in the Palace Museum, Beijing.

The original Compendium of the Bamboo Brazier was destroyed by fire in 1779. The following year the Qianlong Emperor commanded court painters to repaint the scrolls under his supervision. Upon completion, the Emperor gifted the new Compendium of the Bamboo Brazier to the Mount Hui Temple and ordered that it be stored in a special room. In addition, he had the paintings and poems transferred onto a series of steles, also to be kept in the temple. While the temple, along with the replica paintings and poems, were lost to a fire in 1860, some of the stele survive, as do the Emperor's own poems.

The Emperor's experience viewing the Compendium and tasting the tea made from Mount Hui's spring using the bamboo brazier left a deep impression on him, further evidenced by the poem on the present teapot. In particular, the title of the poem expresses his appreciation for Wang Fu's painting. The poem then eulogizes the materials and processes that go into making the tea, and the splendors of the art, the setting, and the history that enhance the tea-drinking experience at the Temple for Listening to Pines. The image on the opposite side of the teapot conveys the experience in visual form by showing a small temple in which one gentleman sits with two teacups on a kang and receives a scroll from an attendant, as another gentleman sits on the floor by a teapot set atop a brazier and a second attendant approaches the brazier. Outside, a pine tree grows amidst rocks in the enclosed courtyard.

Most other Qianlong teapots bearing an imperial poem and illustrating a scene of tea drinking were executed in the famille-rose palette. Examples include one sold in these rooms, 13th-14th September 2016, lot 261; and a closely-related teapot that was sold twice in our Hong Kong rooms, 27th October 1992, lot 156, and again, 2nd May 2000, lot 646, and is now in the Alan Chuang Collection, illustrated in Julian Thompson, The Alan Chuang Collection of Chinese Porcelain, Hong Kong, 2009, pl. 113. A third famille-rose teapot of this type, but with the outdoor pavilion scene and inscription panels surrounded by feathery iron-red scrolls and scattered flower heads, from the Qing Court Collection (coll. no. 故00154836) and still in Beijing, is published in The Complete Collection of Treasures of the Palace Museum: Porcelains with Cloisonné Enamel Decoration and Famille Rose Decoration, Hong Kong, 1999, pl. 108. See also a famille-rose teapot which bears an imperial poem extolling sanqing tea dated to the bingyin year of the Qianlong reign (corresponding to 1746), which is modeled in the same form as the present teapot, but features poetic verses on both sides of the vessel, in the collection of the Chang Foundation and illustrated in Zhongguo lidai taoqi xuanji / Selected Chinese Ceramics from Han to Qing Dynasties. Taipei, 1990, pl. 162.