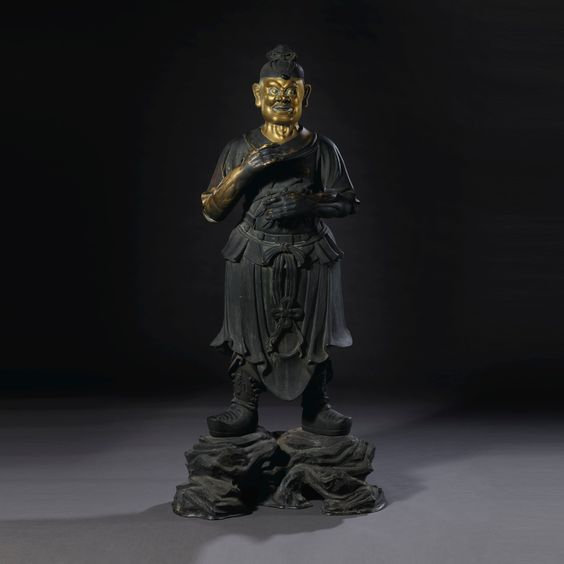 Both figures are powerfully cast with expressive faces set in a grimace, and are shown standing with feet apart and firmly planted on a separate rockwork base. One figure is shown wearing a tall scholar’s cap and a loose robe with long sleeves that fall in heavy folds below the hands raised to hold a tablet cast with a writhing dragon in pursuit of a pearl. The other figure has his hair drawn up under a knotted cloth and wears boots and armor under robes that are secured at the waist with a belt of jade plaques and a long cord tied in a bow and then again in a quatrefoil knot. His hands are raised to hold an implement, likely a tablet, now missing. The head and neck of each figure are richly gilded.

Property from the Springfield Museums to Be Auctioned to Support Museums Collections.

Note: Monumental in scale and powerfully cast with expressive faces and beautifully rendered drapery, this magnificent pair of bronze figure was clearly part of an extremely important commission given the time, skill and material cost involved in their production. While their specific identities are unknown, they would likely have served as part of an ensemble of protective deities.

The current figures can be compared to three gilt-bronze figures dating to the Ming dynasty of related size and fineness of casting, in the Nitta Collection, which were included in the exhibition, The Crucible of Compassion and Wisdom, National Palace Museum, 1987: pl. 120, a bearded guardian dressed in full armor and standing on a separate rockwork base; pl. 121, a seated guardian with fierce expression; and pl. 122, a figure of a standing official. Like the Springfield figure wearing armor under his robes, all three of the Nitta figures wear belts with jade plaques above cords tied in a bow above a second knot below. See, also, the related massive gilt-bronze figure of a deity in military aspect dated late Ming dynasty, also shown standing on a separate rockwork base, sold at Christie’s New York, 21 September 2000, lot 203.

Similar depictions of deities can be seen in contemporaneous paintings, such as the late Ming, circa 1600, hanging scroll in the Musée National des Arts Asiatiques Guimet, Paris, illustrated by S. Little in Taoism and the Arts of China, The Art Institute of Chicago, 2000, pp. 260-1, no. 85. The gods at the top of the painting that wear robes secured at the waist with long cords and their hair drawn up on a knotted cloth are identified as Earth Gods, while the gods in the foreground, that wear scholars’ caps and loose robes with long sleeves and hold tablets, are identified as City Gods..