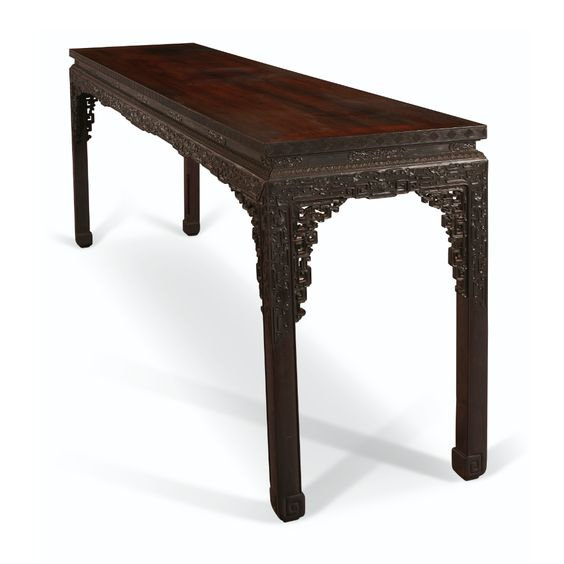 The paneled top is set in a rectangular frame above the narrow waist carved with cartouches framing bats in flight amidst scrolling clouds and a shaped apron carved with archaistic scroll. The whole is raised on beaded, square-section legs terminating in scroll-form feet, and set with openwork archaistic-scroll-form corner spandrels.

Note: No expense was spared in the making of this magnificent table. The abundant use of zitan and the bold yet intricate carving suggest that the table was created in the Imperial workshops. The present table appears to be part of a group of massive imperial zitan tables elaborately carved with kui dragons at the spandrels. Measuring a staggering 92 ¾ in. (235.6 cm.) wide, the present table is longer than any other comparable published example, shorter only than a pair of zitan tables sold at Christie’s Hong Kong: In Pursuit of Refinement – A Legacy of the YC Cheng collection, 3 May 2013, lot 1952. Two smaller examples from the Palace Museum are illustrated by Hu Desheng in Ming Qing gong ting jia ju da guan, vol. I, Beijing, 2006, pp. 209 and 211, nos. 229 and 231. Of these three examples, the present table most closely resembles in its design and its precise carving the pair sold at Christie’s Hong Kong. See another zitan long table which shares the same designs of cloud scrolls and lotus lappets found on the current tables, op. cit., p. 207, no. 225.

It is very rare to find oversized zitan furniture as the production cost would have been considerable. By the early Qing period, zitan wood became a very expensive commodity due to excessive lumbering activities throughout the Ming dynasty. The scarcity was compounded by the natural growth pattern of these trees, which are slow growing and require centuries to fully mature into usable material. Although local sources of zitan existed in the southern provinces of Yunnan, Guangdong and Guangxi, much of the material was imported from Southeast Asia. As an imported material, zitan was scrupulously monitored, carefully restricted, and only reserved for the highest-ranking members of the Court – with the choicest material reserved for imperial use.

This type of long table was usually placed against a wall in a palace room to display decorative objects, as depicted in court paintings. An example still in situ inside the Cuiyunguan, the Hall of Green Cloud, is illustrated in Furniture of the Ming and Qing Dynasties (II), The Complete Collection of Treasures of the Palace Museum, Hong Kong, 2002, pl. 263. Interiors furnished with zitan furniture created a sumptuous effect that conveyed an image of power, luxury, and taste during the Qing period.