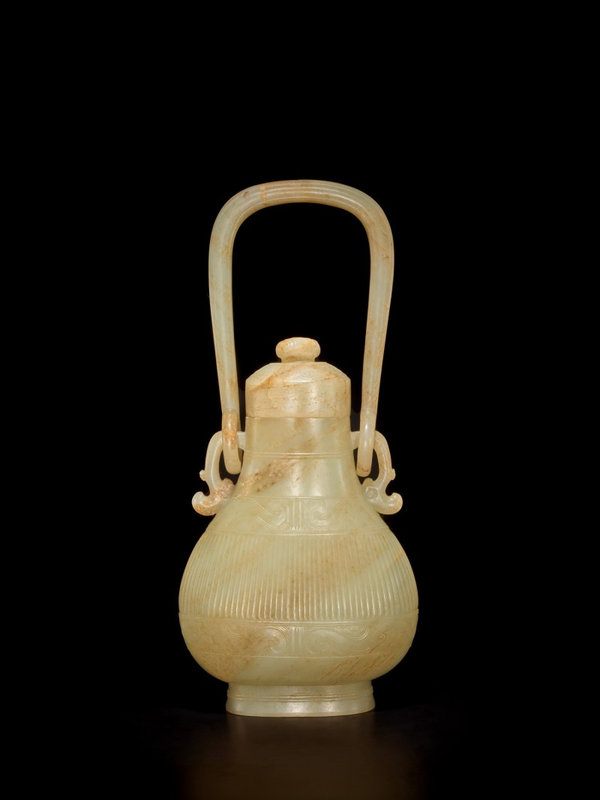 of archaistic you form, the flattened pear-shaped body raised on a slightly splayed foot, the neck flanked by a pair of stylized ruyi handles interlinked with a long arched U-form swing handle, carved around the body with a broad band of vertical ribs between bands of scrolls, the domed cover with a band of pendent lappets surmounted by a lotus bud-form finial, the stone of a pale greenish-celadon tone with areas of russet and natural inclusions.

Note: Continuing the Song tradition of translating the aesthetic of large archaic ritual bronzes into relatively small jade vessels, this you-form vase is carved with two familiar archaic designs: a simplified leiwen-inspired scroll and a broad band of vertical ribs. For an archaic bronze you that is also designed with a wide band of ribbing between bands of birds, see an example attributed to the early Western Zhou period, from the Avery Brundage Collection, now in the Asian Art Museum of San Francisco (obj. no. B60B769.a-.b), published in Jessica Rawson, Western Zhou Ritual Bronzes from the Arthur M. Sackler Collections, vol. IIB, Washington D.C., 1990, fig. 72.1.

It is rare to find jade vases fashioned with the vertical ribs. For vessels of related form but carved with various archaistic motifs, see two in the Palace Museum, Beijing, one with a taotie design, included in The Complete Collection of Treasures of the Palace Museum. Jadeware (III), Hong Kong, 1995, pl. 152, and the other with stiff leaves below a bird band, illustrated in Zhongguo yuqi quanji, vol. 6, Shijiazhuang, pl. 247.

Vertical ribs are also found on jade censers from the Ming dynasty. See a gui-form example attributed to the Ming dynasty, in the Qing Court Collection and still in Beijing, published in The Complete Collection of Treasures of the Palace Museum. Jadeware (II), Hong Kong, 1995, pl. 182; and another from the Robert Youngman Collection, sold in these rooms, 19th March 2019, lot 227.