A yellow-ground green-enameled 'dragon and phoenix' bowl, Mark and period of Kangxi (1662-1722)

A yellow-ground green-enameled 'dragon and phoenix' bowl, Mark and period of Kangxi (1662-1722) 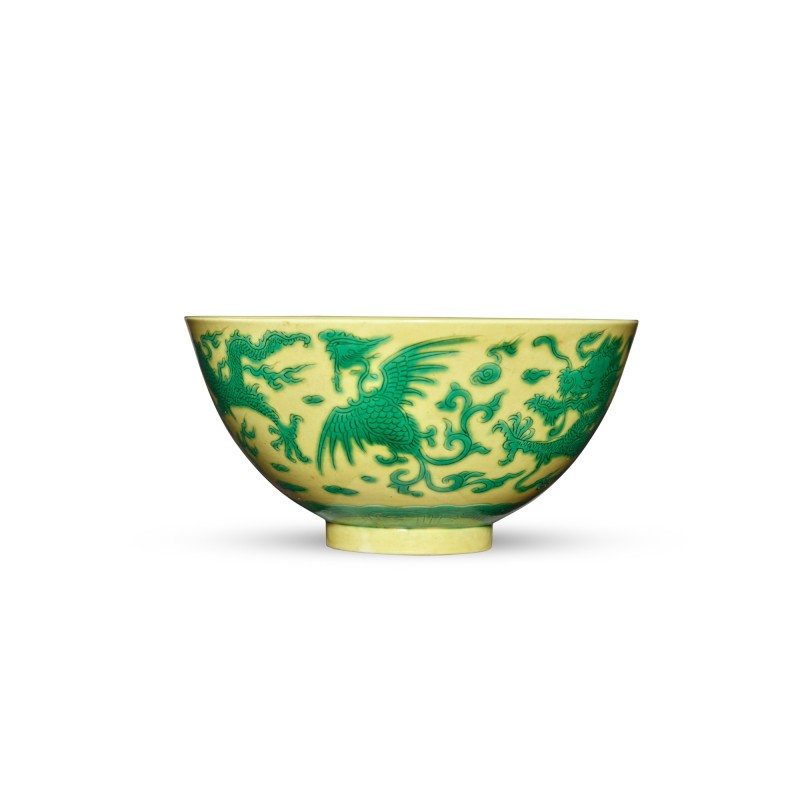 the deep rounded sides supported on a straight foot, brightly decorated around the exterior with two pairs of dragon and phoenix amongst stylized clouds above a band of petal lappets, the interior painted with a central 'shou' medallion, the designs all incised and picked out in bright green enamel against a rich yellow ground, the base with a six-character mark in underglaze blue within a double circle.

Property from the Collection of David and Louise Carter.

Provenance: Acquired prior to 1977, and thence by descent.

David G. Carter and Louise Belknap met at the Metropolitan Museum of Art in the Museum’s library stacks where she was cataloguing for her first job after graduating as an Art History major from Bryn Mawr. David had a newly established fellowship at the Museum after completing his doctoral studies at the Institute of Fine Arts, New York University. Prior to his doctorate, David had been an Art & Archeology major at Princeton University in a wartime accelerated class, served as a diplomatic courier for the U.S. State Department during the Second World War, and earned a Masters degree from Harvard University. In 1951 he married Louise and became Director of the Montreal Museum of Fine Arts. David and Louise pursued their passion for art by building a superb collection that they enjoyed for 63 wonderful years together.