VIENNA.- The Northern Italian city of Bergamo was exceptional for the vitality and wealth of its artistic tradition which rivalled many of the better-known Italian provinces. Two particular paintings, included in the Dorotheum Old Master Paintings sale on the 10th November 2021, reflect the quality and artistic scope of the work produced there: The portrait of a man with a red beard by Giovanni Battista Moroni, and a Still life of musical instruments by Evaristos Baschenis.

The importance of the city of Bergamo, and its influence within the development of Italian art, burgeoned from the sixteenth century. Situated at the foot of the Alps, between the great cities of Milan and Venice, Bergamo was ideally placed to absorb the artistic developments taking place in Lombardy and the Veneto. It was the last outpost of the Republic of Venice on the mainland and communication and the exchange of ideas flowed between the two great cultural centers. In the area of painting, the artistic innovations coming from Venice, combined with the realism of the Lombard style, would provide a rich basis for painters in the city of Bergamo and would lead to the production of outstanding works.

The noble and wealthy bourgeois families of Bergamo were intricately involved in the elaborate cultural life which was flourishing around them. Works such as the splendid, introspective portraits of Giovanni Battista Moroni (c. 1520- c. 1580), or the silent "musical" still lifes of Evaristo Baschenis (1617-1677) beautifully characterise the significance of the arts in the Lombard city at this time.

Giovanni Battista Moroni was a master of the portrait genre, immortalizing not only the members of the most important aristocratic families of Bergamo, but also people of more modest backgrounds: merchants and tailors are depicted with work tools in hand with unprecedented intensity and realism as for example, in his celebrated Tailor in the National Gallery, London, painted in 1571. He was celebrated for his ability to capture the physiognomy, clothes and accessories of his models perfectly, with great descriptive precision. The artist’s commitment to naturalism extended to the emotions and inner life of his sitter which he also depicted as he experienced them, rather than endowing his subjects with any kind of rhetorical artifice.

The portraiture of Moroni was so renowned, it is said that when a gentleman of the Albani family from Bergamo arrived in Venice to have his portrait painted by Titian, the great master expressed surprise that his client would consider a portrait by his hand to be superior to a likeness painted in Bergamo by Moroni, even saying that he believed a painting by Moroni would, in time, become “more valuable and more singular that mine”. (Cavalier Francesco Maria Tassi, Lives of the Painters, Sculptors and Architects of Bergamo, Posthumous Work, Volume I, Bergamo 1793, p . 166).

The work of another of the great artists from Bergamo also illustrated the cultural life of the city in which he lived and worked. The priest-painter, Evaristo Baschenis, who lived a century after Moroni, was to become one of the most important still life painters in seventeenth century Italy. Baschenis, like many of his compatriots in a city so steeped in art and culture, was not only connoisseur of music, but was also a musician himself. Thereby the artist brought his deep knowledge of the subject to his work and, through skillful use of perspective and the application of Caravaggesque traditions of lighting and realism, he created compositions of sublime beauty. 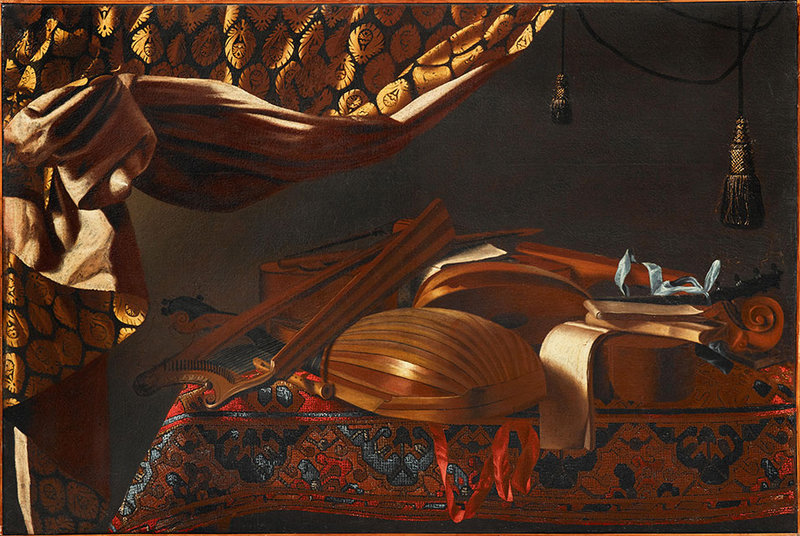