HONG KONG - Christie’s Chinese Ceramics and Works of Art Autumn Auctions in Hong Kong will take place on 3 December 2021. This season features two themed auctions: Song Ceramics from The Songde Tang Collection, as well as the highly anticipated Archaic Jades from the Chang Wei-Hwa Collection Part III, and Important Chinese Ceramics and Works of Art, which will showcase an array of important treasures from private collections.

Marco Almeida, Head of Department, Chinese Ceramics and Works of Art, comments: “We are delighted to yet again bring to the market a series of sales comprised of rare works of art that are fresh to the market. This season, we are offering two private collections in respective dedicated sales with their own catalogues, in addition to our Important Chinese Ceramics and Works of Art sale.” The first is an exciting collection of Song ceramics, lovingly assembled by a renowned Hong Kong-based collector. The Songde Tang Collection is comprised of 40 exquisite ceramic pieces from the most distinguished kiln sites during the Song Dynasty. The collection has never been brought to the market before and is sure to be received with huge excitement by collectors. The highlight of the collection is A Fine And Large Incised ‘Peony’ Lobed Bowl, Northern Song Dynasty (960-1127). The second dedicated sale this season with its own designated catalogue is the long-awaited Chang Wei-Hwa Collection of Archaic Jades Part III : The Spring & Autumn and Warring States Periods. The jade carvings from this collection represent the zenith of the production of such objects in China. Part III is comprised of 77 lots of the rarest examples of archaic jades in private hands, and will be led by A Very Rare And Finely Carved GreyishWhite Jade Reticulated ‘Dragon And Phoenix’ Pendant. 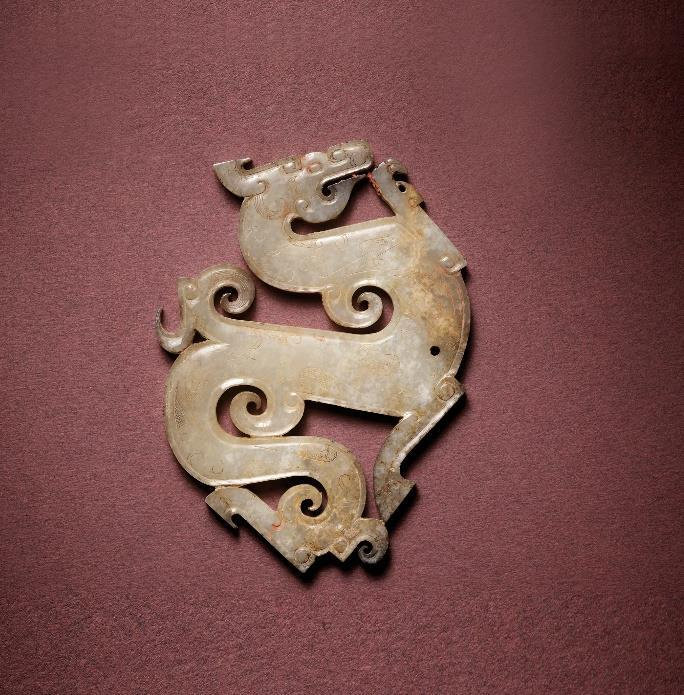 Highlights include an exceedingly rare Cloisonné Enamel Box and Cover (Estimate on request) dating to the very short Jingtai Period (1450-1456) during the Ming Dynasty, an important and very-well documented Archaic Bronze Food Vessel, Fangzuogui from the Early Western Zhou Period 11th-10th Century, BC., being offered to benefit the Robert Chang Art Education Charitable Foundation, and a Magnificent Blue and White Pearshaped Vase, Yuhuchunping from the Yongle Period (1403-1425), hailing from an Important Asian Collection. Furthermore, we are fortunate this season for the opportunity to offer the Hosokawa Collection – an important collection of scholarly objects belonging to a very influential political family and keen disseminators of Chinese culture in Japan. The domed circular cover is exquisitely enamelled with a lotus seed-pod surrounded by rings of petals, and the rounded sides are decorated with eight multi-hued lotus sprays, each enclosed within large moulded lotus petal panels emerging from the central medallion, the pointed tip of each panel curling naturalistically, the overlapping lotus panel band repeated around the sides of the box, the reign mark incised in a line across the gilded base.

The copper-bodied box is cast in the form of an eight-petalled lotus bloom standing on a short foot ring. It is 12.4 cm. in diameter and enameled on the exterior in blue as its ground colour. The center of the cover is decorated with a lotus pod, and each of the lotus petal is decorated with a lotus flower spray in either red, yellow, white or blue, borne on leafy stems. The interior of the box and cover and the base is gilt. The base is incised in the centre with a single-line six-character inscription Daming Jingtai nian zhi (made in the Jingtai reign of the Great Ming) in regular script. The lotus petals made in relief are a unique design that requires sophisticated workmanship. The lotus pod motif is derived from elements of Buddhist mural paintings or stone carvings in Dunhuang. The leaves are decoratedin two or three colours to denote shading, while all the lotus blooms are decorated in three colours to give a sense of richness and sumptuousness. There are scattered enamel pits on the surface due to technical insufficiency, adding to it a sense of antiquity. Coincidentally, there is an almost identical Jingtai-marked example in the Taipei Palace Museum (fig. 1), the only difference being the location of the mark. According to the exhibition catalogue Enamel Wares of the Ming and Qing Dynasties, “the base and interior of the box is undecorated and gilt, and the interior centre of the box is incised with the single-line mark Daming Jingtai nian zhi from right to left.” Careful inspection reveals that the two marks are very closely related in style and appear to be done by the same hand. Chen Hsia-sheng of Taipei Palace Museum is in the opinion that “the fullness of the petals ; the two or three-coloured leaves; the heaviness of the body; the thickness of the enamel and the hidden ends of the cloisons all point to an early dating. Also the way the mark is done is consistent to those on lacquer and porcelain of the same period. This is undoubtedly a real Jingtai period example.”

What real Jingtai cloisonné enamels look like has always been a difficult subject for the researcher. This is probably due to the reputation of Jingtai-period enamels which spawned a myriad of copies that appeared in later periods, and in turn gave rise to the nomenclature ‘Jingtailan (Jingtai blue)’- a popular term for cloisonné enamel which uses a reign name to denote an entire genre of craft. Nowadays the term ‘cloisonné enamel’ is only used in the academic world, while ‘Jingtai blue’ is widely used by the public. Just like ‘Xuande censer’, which is the popular name for bronze incense burners, ‘Jingtai blue’ and ‘Xuande censer’ are both now widely accepted trademarks.

A survey of cloisonné enamels with Ming reign marks reveals that only four reign marks are found on extant examples – Xuande, Jingtai, Jiajing and Wanli. Amongst these, the ones bearing Jingtai marks number the most numerous and most problematic in dating. In the Palace Museum there are more the one hundred cloisonné enamel works with Jingtai marks, not to mention museums worldwide, such as the British Museum, the Brooklyn Museum, and the Hermitage Museum, which all have substantial collections of Jingtai-marked cloisonné enamels. The dating of these Jingtai-marked pieces encompasses Yuan, Ming, Qing and Republic period. The current survey shows that most Jingtai-marked examples are made in the Kangxi period. These include refashioned examples, earlier examples that are added with marks and Kangxi examples with Jingtai marks. The reason behind the making of these pieces is still unclear. In the records of the Zaobanchu ateliers it is also recorded that the Qianlong Emperor Hongli also made some Jingtai-marked cloisonné enamels. Do real Jingtai-marked vessels exist? In the accounts by Late Ming/Early Qing collector Sun Chengze in Chunming Mengyulu (Writings after a Bright Spring Dream), it is recorded “outside the Xuanwu gate on the 4th of each month a market forms, called the ‘Inner Market’” where precious and rare treasures made for the inner court were exchanged “such as Xuande bronze cencers, Chenghua porcelain, Yongle lacquer made in the Guoyuanchang and Jingtai enamels made in the Imperial atelier. Their refined quality far surpassed those of previous dynasties and connoisseurs from everywhere purchased them with high prices at the Inner Market.” From this account we can see that Jingtai cloisonné enamels made in the Imperial atelier were as precious as Xuande bronze censers, Chenghua porcelains and Yongle lacquers. Therefore, identifying those enamels that are truly of the Jingtai period has always been a most pressing issue. Up until now there has not been an universal understanding what constitutes real Jingtai enamel. There are three principle theories: Mr. Yang Boda of Beijing Palace Museum is of the opinion that the gu vase with Daming Jingtai nianzhi mark is a real example (fig. 2); Mr. Li Jiufang of Beijing Palace Museum is of the opinion that the parfumier decorated with butterflies and flowers is stylistically close to the Jingtai period; Ms. Chen Hsia-sheng of Taipei Palace Museum is of the opinion that the cloisonné enamel lotus box and cover is a real example of Jingtai period enamel. From my own research over the years, I think Ms. Chen’s theory is the most plausible, if Jingtai period enamels indeed exist.

The general rule of stylistic dating would place Jingtai enamels quite close in style to that of Xuande enamels. Xuande lasted 10 years (1436-1449), followed by Zhengtong (1436-1449), then Jingtai (1450-1456) at only 7 years. This means there is only a gap of 14 years between Xuande and Jingtai. There are very few extant examples of Xuande cloisonné enamel, and most of them are in the Beijing Palace Museum, with a range of styles. Apart from these, the British Museum and the Uldry Collection in Switzerland each owns a dragon jar with the marks Daming Xuande nian zhi (made in the Xuande year of Great Ming) and Yuyongjian zao (made by the Imperial Atelier). A cloisonné enamel monk’s cap ewer (fig. 3) with its original case (fig. 4) in the Museum of Tibet, although without a mark, is closely related to Xuande-marked red-glazed and white-glazed monk’s cap ewers, and is a benchmark example of early Ming cloisonné enamel works. The ewer has been exhibited in the Shanghai Museum, Palace Museum and the Capital museum. It has a cover, handle and spout, and the neck and body is decorated with cartouches, each containing a lotus spray. The lotus is sumptuously decorated with brilliant and harmonious coloured enamels. The cloisons are fluid and full of movement, with bright, well-preserved gilding. To add to its preciousness, it also comes with the original red-lacquered qiangjin case decorated with scrolling lotus. The qiangjin technique was developed in the Southern Song dynasty and continued till the early Ming Yongle and Xuande periods. The red-lacquered qiangjin box with sloping top excavated from the tomb of Zhu Tan (1370-1390) now in the Shandong Provincial Museum, and the red-lacquered qiangjin box inscribed Daming puxi (Genealogy of the Great Ming) in the Palace Museum are both examples of early Ming qiangjin lacquer works. This genre became extinct after the Yongle Xuande period and was replaced with polychrome qiangjin lacquer, in which polychrome lacquer is combined with incised gilt decoration. The red lacquer and the decoration on this case show distinctive early Ming characteristics, and is likely made in the same period as the monk’s cap ewer. The cloisonné enamel ‘lotus’ box offered at Christie’s is very closely related to the monk’s cap ewer both in terms of its enamel colours, the decoration and the gilding. Specifically, the way the cloisons are laid is consistent with Ms. Chen Hsia-sheng’s description of ‘hidden ends of the cloisons’. The box shares many similarities with the monk’s cap ewer and is stylistically of the same period, which makes it a very rare example of early Ming cloisonné enamel.

The box was included in the exhibition The Arts of the Ming Dynasty jointly held by the Arts Council of Great Britain and the Oriental Ceramics Society in 1957. It was published again by Sir Harry Garner in Chinese and Japanese Cloisonné Enamels in 1962. 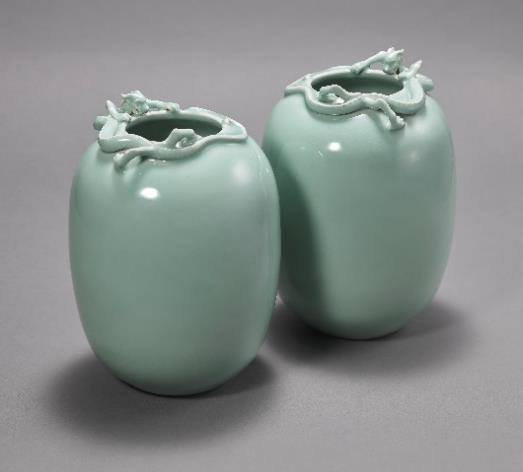