A teadust-glazed hexagonal vase, Seal mark and period of Qianlong (1736-1795)

A teadust-glazed hexagonal vase, Seal mark and period of Qianlong (1736-1795) 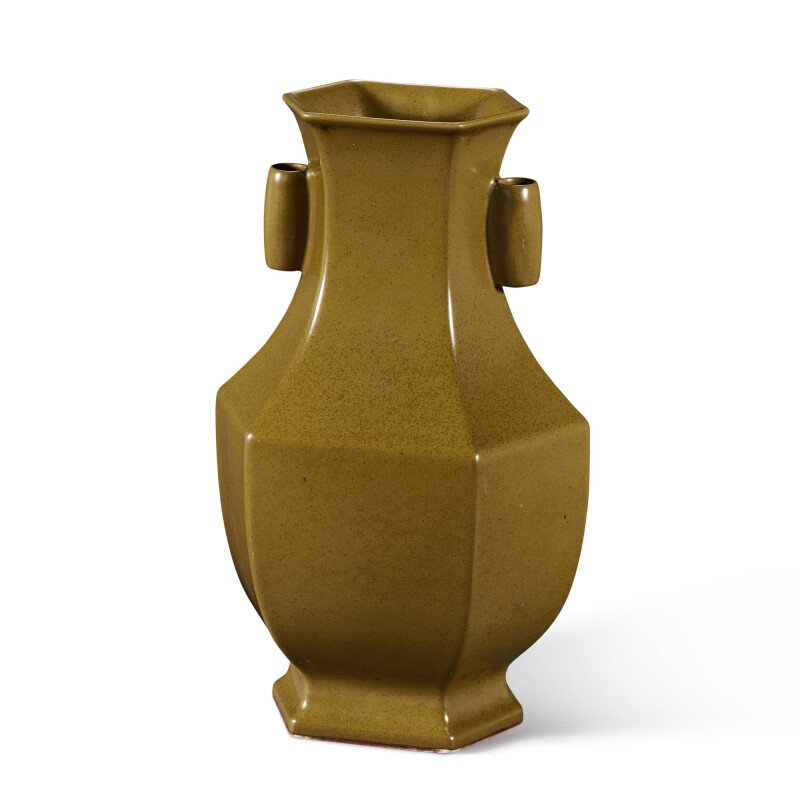 sturdily potted after the archaic fanghu form, the hexagonal body supported on a pronounced foot, gently curving at the shoulders to a flared neck, flanked by a pair of tubular loop handles, covered overall in rich mottled olive-green glaze, the base with a six-character seal mark.

Note: The present vase is notable for its lustrous and deep teadust glaze which perfectly complements the angular shape, and is a testament to the technical perfection achieved by craftsmen working at the imperial kilns in Jingdezhen under the Qianlong Emperor as well as his keen interest in antiquity. Its form is a reinterpretation of the archaic bronze hu form which was first developed by craftsmen working at the Guan kilns during the Song dynasty. Further reference to bronzes is made in the rich teadust glaze, inspired by their patina and an innovation of the Yongzheng period. This glaze was achieved through the precipitation of yellow crystal that stands out against the dark green background, producing what is known in Chinese as chayemo or ‘tea-leaf’ dust glaze effect. Successfully fired vases have many stipples that make the glaze appear especially rich and velvety at the touch.

Compare also a slightly smaller version, from the Hall family collection, sold in these rooms, 2nd May 2000, lot 556, and included in the Oriental Ceramic Society exhibition Iron in the Fire, Ashmolean Museum, Oxford, 1988, front cover and cat. no. 89, and A Selection of Ming and Qing Porcelains, Eskenazi Ltd, London, 2004, cat. no. 14, and illustrated in Giuseppe Eskenazi in collaboration with Hajni Elias, A Dealer's Hand: The Chinese Art World Through the Eyes of Giuseppe Eskenazi, London, 2012; Chinese version, Shanghai, 2015, reprint, 2017, pl. 433.

Perfectly symmetrical and covered in an even glaze, this deceptively simple vase required the utmost attention and skill in every stage of its production, from the purity of the clay and precision of potting to the evenness of the glaze and control of firing. The slightest irregularity would result in the rejection and destruction of the piece, thus pushing the craftsmen to the limits of their abilities, particularly in the production of large vessels such as the present. Furthermore, the hexagonal-section form indicates that this vase would have been created in a mould, which demanded acute precision, as the traditional method of using a potter’s wheel could only result in vessels of circular section.

Qianlong mark and period vases of this form are also known in various monochrome glazes, such as a sky-blue glazed example illustrated in Sekai toji zenshu / Ceramic Art of the World, Tokyo, 1956, vol. 12, pl. 46; and two Ru-type vases, sold in these rooms, the first, 26th October 2003, lot 50, and the second, 9th October 2007, lot 1526. For the prototype of this form see a Yongzheng mark and period guan-type hu of slightly larger size, sold in these rooms, 9th October 2007, lot 1534.