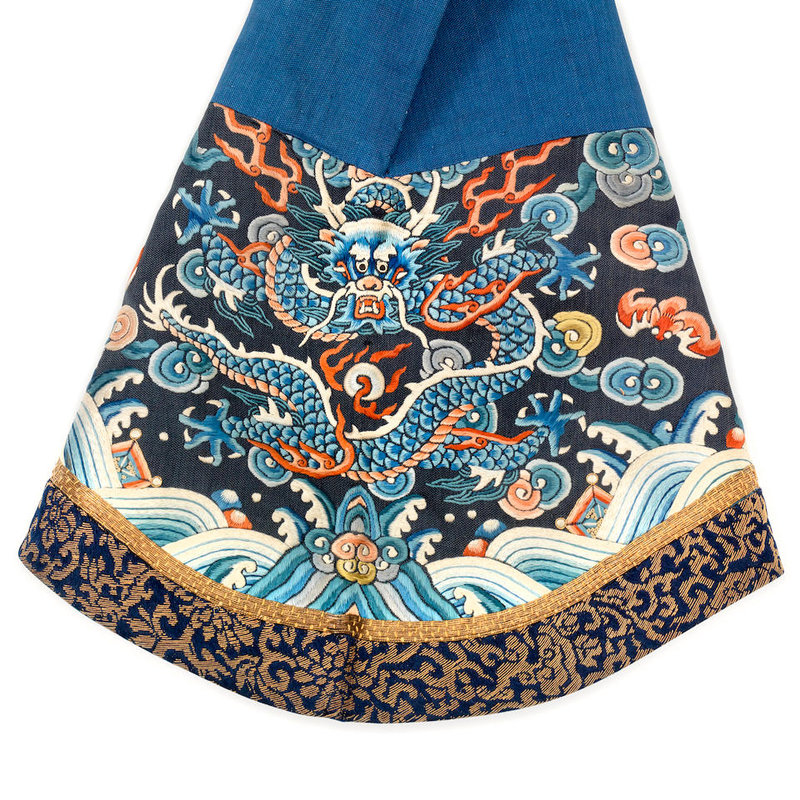 Meticulously worked on both the outer and inner sides in satin stitch and coloured threads with nine writhing five-clawed resplendent blue dragons clutching or pursuing flaming pearls amidst dense trailing scrolls of five-coloured clouds interspersed with bats, all above the terrestrial diagram rising from rolling waves and lishui stripe at the hem, all picked out in vibrant shades of blue, aubergine, yellow, coral-red and green, reserved on a deep apricot ground, the matching dark-blue-ground collar and cuffs worked with further blue dragons amidst bats, clouds and waves.

Note: Superbly embroidered on both the inner and outer surface with nine lively five-clawed dragons riding the heavens, the present robe is a rare and remarkable example of its type and would have most probably, been worn by a Third or Fourth Rank Prince.

Double-sided robes displaying such an impeccable and detailed embroidery and meticulous attention to detail, noted in the animated expressions of the dragons and their overlapping scales, exquisitely executed in various shades of blue to convey the impression of depth, are obvious features of the most exquisite garments reserved for the highest-ranking members of Qing society. Furthermore, the depictions of dragons clutching, rather than chasing, flaming pearls, also suggest that the wearer would have been one of the most immediate family members of the Emperor.

According to the 'Illustrated Regulations for the Ritual Paraphernalia of the Imperial Court' Huangchao Liqi Tushi 皇朝禮器圖式, edited in 1759, blue was the colour worn by the Third and Fourth Degree Princes; see J.Vollmer, C.Hall and Lee Cheor Lin, Power Dressing. Textiles for Rulers and Priests from the Chris Hall Collection, Singapore, 2006, p.147.

In Han Chinese thought, the five-clawed dragon pursuing or clutching the flaming pearl was the quintessential symbol of Imperial power, embodying royalty, dominion and expressing the visual metaphor of the good ruler who behaved wisely for the wellbeing of his subjects. Capable of flying high in the sky and diving back into the sea, dragons were regarded as intermediaries between Heaven and Earth and credited with extraordinary powers that compared to those of the Emperor. Even the number nine, for the dragons depicted on the present robe, is highly evocative and likened to the power of Heaven. The multiple of three threes, nine has a long association with the Emperor. In addition, the 'Records of the Grand Historian' Shiji, completed during the first century BC, recounts that, having tamed the floods that once engulfed the land, the mythical emperor Yu divided the territory into the Nine Provinces and collected bronze in tribute from each one. Thereafter he cast the metal into nine large tripod cauldrons. These vessels thus were at the heart of ruler's possessions and symbolic conveyers of power.

At the Qing Court the colour blue had a ritual significance, as it was associated with the most important rites at the Altar of Heaven, where the Emperor performed sacrifices at the Winter Solstice and prayed for good harvest and rain during the summer months. It is possible, therefore, that the present robe may have been worn on the occasion of a ritual at the Temple of Heaven.

The Imperial Regulations confirmed the importance of a new type of robe, the jifu or longpao, as semi-formal Court wear and brought the cosmic purpose of Imperial rule into sharp focus. The careful arrangement of sinuous dragons writhing amid clouds and above the universal ocean washing against the earth mountain, quickly transcended the political and ethnic priorities of Imperial government to become universal symbols of the Empire. Dragon robes thus became supreme significant social markers representing access to power. The right to wear such garments was dependent on rank and status. The Manchu rulers of the Qing dynasty were keen on projecting an evocative and powerful image of themselves, and their Court costumes conveyed legitimacy and heritage. Despite their initial reluctance to wear the same type of robes as their Ming predecessors, by the reign of the Kangxi Emperor, the Manchu elites were keen wearers of richly-ornamented 'dragon' robes on semi-formal Court occasions and official duties.

The Qing robes, however, had their own distinctive shapes and trimmings. For example, the slits appearing at the centre seams, at the front and back hem, as well at the sides, were Manchu innovations that made it comfortable for the garment to be worn during riding. In addition, 'dragon' robes were secured at the waist with ceremonial belts suspending narrow and straight streamers, and sometimes, purses. Other conspicuously-displayed accessories further identified Manchu dress, such as a hat, a surcoat and a necklace; see V.Garrett, Chinese Dress From the Qing Dynasty to the Present, 2008, North Clarendon VT, pp.16-17.

The impeccable quality and style of the embroidery closely compare with an Imperial double-sided yellow-ground robe, Qianlong, also decorated with similar blue dragons, from the Qing Court Collection in the Palace Museum, Beijing, illustrated by Ming Wilson, Imperial Chinese Robes from the Forbidden City, London, 2010, p.46-47, no.46. An Imperial blue-ground kesi silk robe, Qianlong, also from the Qing Court Collection, decorated with nine blue dragons, is illustrated in The Complete Collection of Treasures from the Palace Museum. Costumes and Accessories of the Qing Court, Shanghai, 2006, no.37.