An impressive pair of painted and gilt pottery figures of lokapalas, Tang Dynasty (618-907)

An impressive pair of painted and gilt pottery figures of lokapalas, Tang Dynasty (618-907) 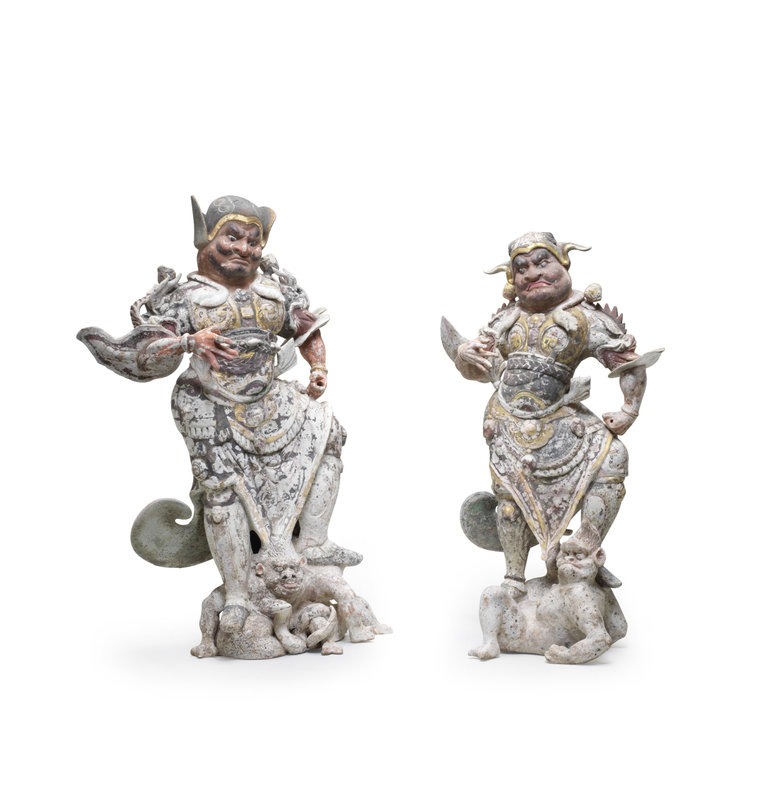 Each modelled in a powerful stance, standing on a demon with one knee raised, one of the demons with a serpent entwined around its leg, the figures with defiant expressions, each with a clenched fist resting upon the raised leg and the other arm held animatedly aloft, wearing elaborate armoured robes with billowing sleeves and hems, fashioned with high waisted belts and adorned with floral and pendent embellishments.

The results of Oxford Authentication Ltd. thermoluminescence tests nos.C200f49, and C200f50, dated 13 November 2000, are consistent with the dating of this lot.

Note: The present impressive figures are 'protectors of the four directions', thus their Sanskrit name lokapala, an appellation, which the Chinese rendered as tianwang, or 'Heavenly King'. In Buddhist cosmology, they reside on the four slopes of Mount Sumeru, the legendary axis of the world, but their effigies are placed in temples to protect the main deity. Compare with two related figurines of lokapalas with gilding, dated to 724 AD, excavated from a Tang dynasty tomb at Xinzhu County in Baqiao district, Xi'an, 1991, illustrated in Tao yong: Xi'an wenhua jinghua, Xi'an, 2014, pp.92-93, nos.127-128.