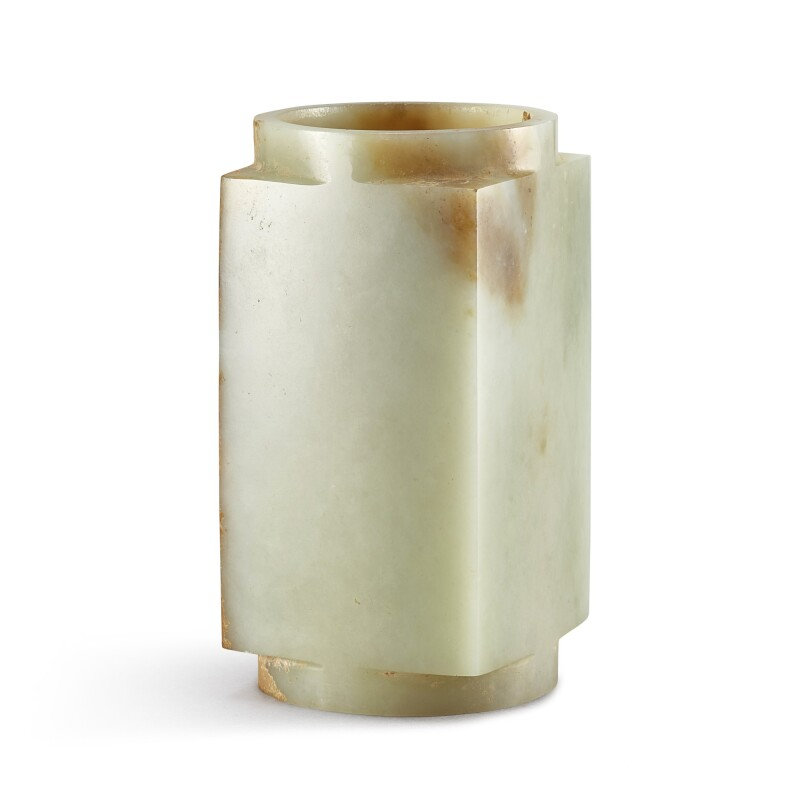 Note: Originating from the Liangzhu culture in the Yangtze River Delta, jade cong stand out as iconic of Neolithic Chinese civilisations. Exclusively made for the most prestigious ranks of society, jade cong were produced not only in Liangzhu, but also imitated or repurposed in other Neolithic cultures. While jade cong from the Liangzhu culture are often ornamented with masks of various levels of complexity, those found in other early civilisations tend to be undecorated, or at most with minimalistic design. Finely polished, the present tubular jade cong displays an attractive pale celadon tone. The angularity of the object is complemented by the central circular perforation, slightly protruding on both ends forming the ‘neck’ and ‘foot’.

See three related cong illustrated in Jessica Rawson, Chinese Jade from the Neolithic to the Qing, British Museum, London, 1995, cat. nos 7.1 and 7.2, from the collection of Sir Joseph Hotung, as well as p. 151, fig. 2, accession no. 1914,0513.6. Rawson suggests that cong of tall proportion, ‘with completely smooth, flat sides in place of subdivided section’ and ‘made of strongly coloured stones with a relatively glassy finish’, were made in western China in the late Neolithic or Shang period (pp. 150-153). Similar unornamented examples of relatively tall proportions have been excavated from the Qijia culture sites in Gansu; see The Complete Collection of Jades Unearthed in China, vol. 15: Gansu, Qinghai, Ningxia, Xinjiang, Beijing, 2005, pls 31, 37-38.

For centuries after the Neolithic period, jade cong continued to fascinate generations of collectors, connoisseurs, scholars and artisans. An undecorated Qijia culture jade cong, treasured and used as a flower vessel in the imperial Qing court, is now preserved in the National Palace Museum, Taipei, accession no. Gu yu 001033. 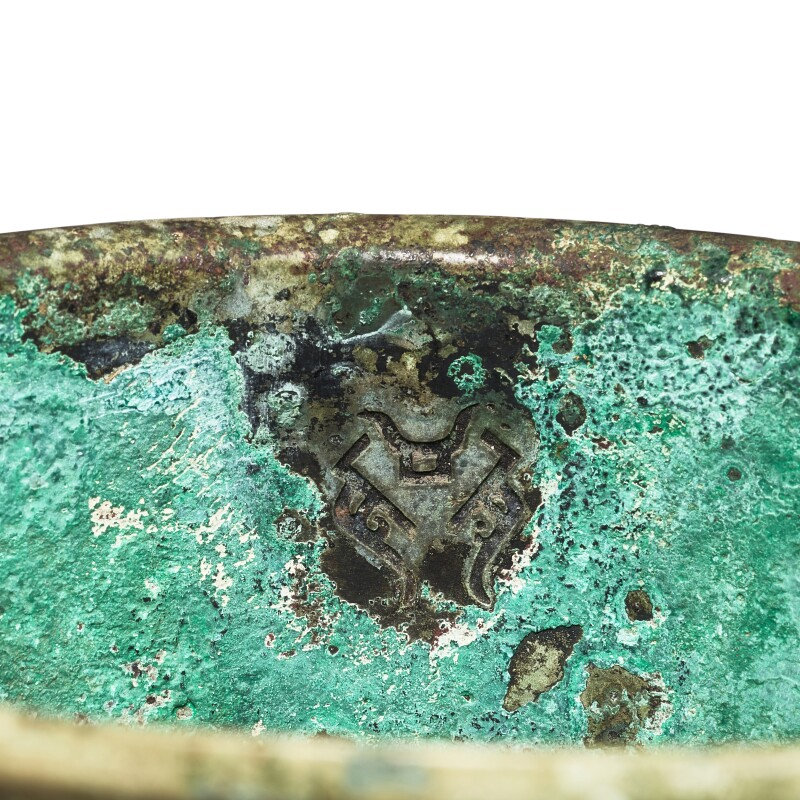 a pictograph beneath the rim on the interior depicting a vessel between a pair of hands, probably reading zun.

Note: This tripod food receptacle is a classic ritual bronze vessel of the stylistically most mature and accomplished period of China’s bronze production in the Shang dynasty (c. 1600-1045 BC). The art of bronze casting experienced its first flowering in the Anyang period from around 1300 BC, when the Shang had moved to Anyang in Henan, and shapes and designs, which often had been somewhat basic in the previous Erligang period, became highly accomplished.

The Argyropoulos ding with its well-rounded bowl and slender legs displays a form that is powerful and yet particularly elegant in its proportions. Most ding with related designs are larger and heavier, with much sturdier columnar legs. The individual design elements – the taotie masks centred on raised flanges, either side of which is individually also reading as an animal in side view, as well as the cicadas on their pointed blades – are all well known from the period. Yet, the present design is remarkable for its clearly structured high-relief features distinctly set off against carefully drawn linear scrollwork. In combination, its form and decoration make this ding a particularly impressive and sophisticated representative of the Anyang style.

The vessel is closely related to several larger and much sturdier tripods, where frontal masks and profile animals in the taotie band are, however, separated and do not allow an alternative reading as seen on this piece; see, for example, a piece with masks between confronted animals from the Sackler collections illustrated and discussed in Robert W. Bagley, Shang Ritual Bronzes in the Arthur M. Sackler Collections, Washington, D.C., 1987, no. 82 , where it is compared to ding from Sufutun, Yidu, Shandong and from Mawangcun near Chang’an in Shaanxi (figs 82.5 and 6), and related to one of several even larger ding from the tomb of Fu Hao at Anyang, consort of King Wu Ding, the only undisturbed Shang royal tomb so far discovered, which can be dated to around 1200 BC (fig. 82.4); for the tripods from Fu Hao’s tomb see also Yinxu Fu Hao mu/Tomb of Lady Hao at Yinxu in Anyang, Beijing, 1980, col. pl. 2:1 and pls 6-9, with details of the designs p. 22, fig. 11:1; p. 29, fig. 18:3 and p. 39, fig. 26.1; one piece close to the Sackler tripod was also sold in our New York rooms, 17th September 2003, lot 6. Another larger ding, with the taotie band filled with masks only and lacking flanges, is in the Freer Gallery of Art, Washington, D.C., accession no. F1946.31, illustrated in John Alexander Pope et al., The Freer Chinese Bronzes, Washington, 1967, pl. 30.

Alexandre J. Argyropoulos (1894-1978) was Greek ambassador to China after World War II. He began collecting Chinese ceramics when posted to Paris in 1926, but formed his bronze collection after the War, largely on the advice of Hong Kong dealer T.Y. King. He was descendent of an eminent Byzantine family of Constantinopel (Istanbul) that can trace its origins back to the 9th century and includes the Byzantine emperor Romanos III Argyros, or Argyropoulos (r. 1028-1034), and the philosopher Johannes Argyropoulos (c. 1415-1487), who after the fall of Constantinopel in 1453 fled to Florence, taught at the court of Lorenzo de Medici and was later summoned to Rome by the Pope; he contributed to a revival of Greek learning in Italy, translated Aristotle and other Greek works into Latin, and in 1481 was immortalized by Domenico Ghirlandaio among other Florentine dignitaries in the fresco The Vocation of the Apostles in the Sistine Chapel of the Vatican.

Julius Eberhardt (1936-2012) was an Austrian architect and contractor, who after a trip to the Far East developed a passion for early Chinese art. To make the collection available to scholars, he set up a small museum in Vienna that was open by appointment and where the collection remained until his death. The pride of the collection was the group of archaic bronzes from the collection of Alexandre J. Argyropoulos, all of which had been selected to be included in the exhibition in the Doge’s Palace in St. Mark’s Square, Venice, in 1954, one of the major exhibitions of Chinese art in the 20th century. 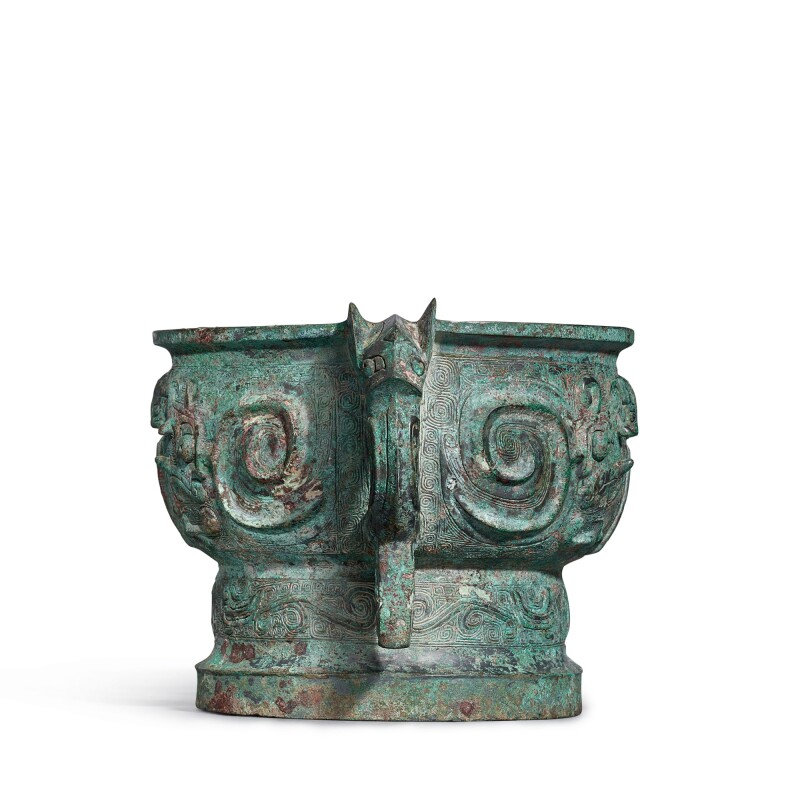 Both the grandiose shape and the spectacular design of this food vessel of gui form exemplify China’s bronze artisans’ move away from the serene aesthetics of the Shang dynasty towards a more exuberant style. With its high raised foot and emphasized handles and its fanciful design of dragon-like creatures, this gui was designed to attract attention in an ancestral ritual, where it would have stood out among a group of contemporary bronzes.

In the Western Zhou period, the stern and often rather formal decoration of bronze vessels of the Shang was transformed into much livelier and, as in the present case, truly dramatic designs. The dragon-like animals are distorted in proportion and reduced to their most effective features: The craftsmen concentrated on overly large heads consisting mainly of eyes in prominent relief and of gaping mouths, their bodies were reduced to abstract scrolls, similar in size to the heads. A single leg with bird-like claws, which is protruding beneath each head increases the mysterious quality of the image. The emphasis on curl elements lends the extremely powerful motif a particularly vivid aspect.

Jessica Rawson, who publishes a similar gui from the Sackler collections, discusses early Western Zhou bronzes with this motif under the heading ‘Flamboyant Bronzes’ and writes “one of the most unusual motifs is a coiled dragon whose spiral body is emphasized by a raised spine” (Jessica Rawson, Western Zhou Ritual Bronzes from the Arthur M. Sackler Collections, Washington, D.C., 1990, pp. 35-9, and pp. 452-3, no. 58). This gui design, which appears to have enjoyed great popularity in the early Western Zhou, is rarely found combined with bird motifs around the foot as on the present vessel. Similar gui are more common with dragon- or snake-like creatures around the foot, and are often lacking the small mask in the centre of the sides, which can be replaced by an extended flange.

One such gui is in the Palace Museum, Beijing, from the Qing court collection, quite possibly the vessel illustrated together with a wooden stand and wooden cover with jade knob in the Guwan tu [Pictures of Ancient Playthings] handscroll of 1728 from the Sir Percival David Collection in the British Museum (accession no. PDF X01), which appears to have been commissioned by the Yongzheng Emperor (r. 1723-1735) to record items in the imperial collection; see The Complete Collection of Treasures of the Palace Museum. Bronze Ritual Vessels and Musical Instruments, Hong Kong, 2006, pl. 27; and China. The Three Emperors 1662-1795, The Royal Academy of Arts, London, 2005, cat. no. 168, with the gui visible p. 253 bottom right. The design was also copied in the Qing dynasty (1644-1911), perhaps around that time, see a vessel sold in our Paris rooms, 10th June 2015, lot 97. Gui of this type have been excavated particularly in Shaanxi province, for example, in the Yu state cemetery at Zhuyuangou, Baoji, where similar vessels were discovered in the tombs of a Yu ruler and another high Yu dignitary, datable to the reigns of Zhou kings Zhao and Mu, respectively, the late 11th/early 10th century BC; see Li Xixing, ed., Shaanxi qingtong qi/The Shaanxi Bronzes, Xi’an, 1994, pls 64:1 and 75:1; p. 149, fig. 115:2, and p. 157, fig. 123:1. These two Baoji vessels are illustrated again in Five Thousand Years of Chinese Art Series. Shang Chou Dynasty Bronze VII: Kuei Vessels, Taipei, 1990, nos 111 and 115, together with a gui excavated in Wangjiazui, Qishan, also in Shaanxi, no. 116, and one in the Shanghai Museum, no. 122; the latter two and one of the Baoji vessels are published again in Peng Qingyun, ed., Zhongguo wenwu jinghua da cidian: Qingtong juan [Encyclopaedia of masterpieces of Chinese cultural relics: Bronze volume], Shanghai, 1995, nos 0345-0347. 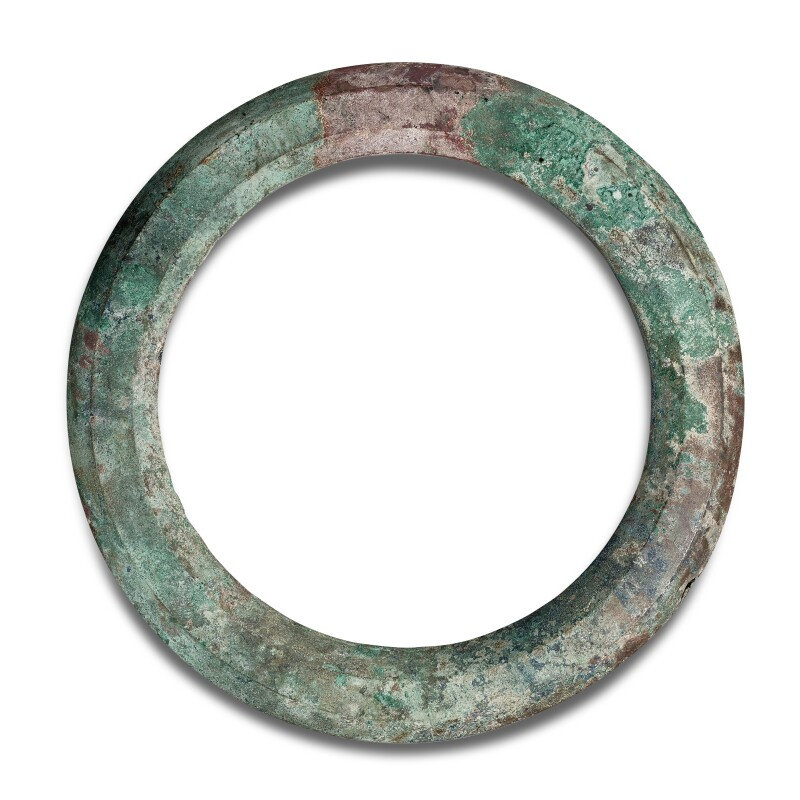 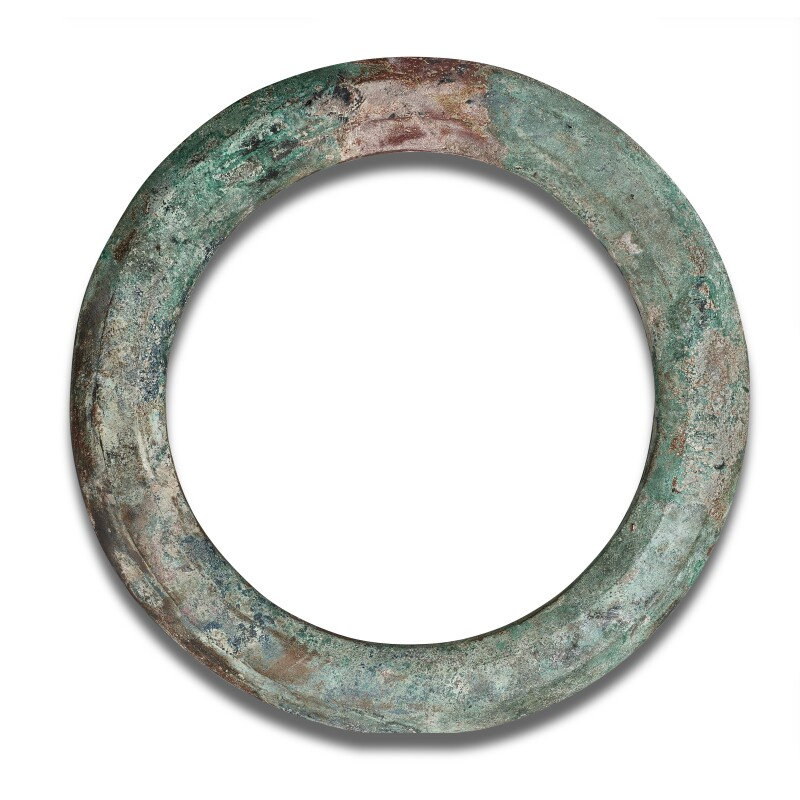