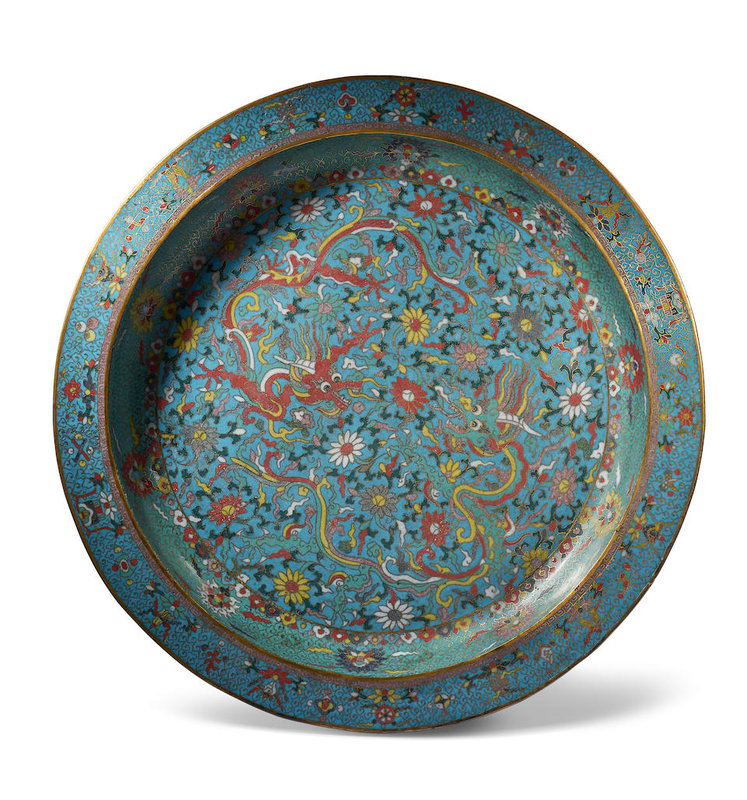 The interior brightly and boldly decorated in multi-coloured enamels with two five-clawed dragons confronted within a field of scattered flower sprigs, encircled by a ruyi-head band and multi-coloured lotus scrolls with attendant buds blanketing the cavetto, the everted rim with Buddhist emblems and babao, repeated further on the exterior, the base enamelled in red with a six-character reign mark reserved on a large greenish-turquoise rectangle within key-fret and ruyi borders surrounded by scattered multi-coloured clouds, all on a bluish-turquoise ground.

Audrey B. Love, a philanthropist and patron of the arts, was the daughter of Edith Guggenheim and Admiral Louis Josephthal. C. Ruxton Love Jr. was a partner with the Stock Exchange firm of Josephtal & Co. Both were well known art collectors and their collection of Napoleonic art was exhibited in the Metropolitan Museum of Art in 1978 and their Georgian silver collection was exhibited in the Victoria and Albert Museum in 2002. Audrey Love was a founding member of the Lowe Art Museum of the University of Miami.

Note: This impressive dish belongs to a small and important group of cloisonné enamel wares bearing prominent enamelled Wanli marks within a rectangle and encircled by ruyi heads. As noted by Sir Harry Garner, they are of outstanding documentary importance as the only pieces with contemporary marks of sixteenth-century emperors that can be accepted without question as belonging to the period of the mark, see H.Garner, Chinese and Japanese Cloisonné Enamels, London, 1962, pp.76-77.

Wanli mark and period dishes of this size decorated with dragons are extremely rare, with only three other related examples which appear to have been published, including a large cloisonné enamel 'dragon' dish (51cm diam.) with a foliate rim in the Qing Court Collection, illustrated in The Complete Collection of Treasures of the Palace Museum: Metal-bodied Enamel Ware, Hong Kong, 2002, no.47; another slightly smaller (50cm diam.) dish in the British Museum, London, illustrated by H.Garner ibid., pl.F (acc.no.1885,1227.79); and the third example of smaller size (48cm diam.) in the National Palace Museum, Taipei, illustrated in Enamel Ware in the Ming and Ch'ing Dynasty, Taipei, 1999, no.11.