From 10 December 2021 to 6 March 2022 the Kunsthaus Zürich presents the first exhibition in a German-speaking country devoted to the graphic oeuvre of virtuoso Baroque artist Giovanni Benedetto Castiglione. This innovative master, whose graphic works bear the influence of Rembrandt, invented the monotype technique in the 17th century. His drawings, from painterly works with brush and oil to sketch-like pen pieces, were an important source of inspiration for the artists who came after him. The works on loan from prestigious sources, including the Royal Collection of Queen Elizabeth II at Windsor Castle, are of exquisite quality.

Giovanni Benedetto Castiglione (1609–1664) embodies everything that makes the Baroque so enduringly fascinating: its celebration of inspired artistic brilliance, opulent magnificence and a striving to enrapture the viewer’s senses. Yet Castiglione, who hailed from Genoa and was also dubbed ‘Il Grechetto’, has been overshadowed by Italy’s more celebrated artists. The last comprehensive exhibition to focus on his graphic works called him a ‘lost genius’. He carved out a path of his own between Titian, Bernini and Poussin – artists whom he greatly admired – and left behind a highly individual body of work that curators Jonas Beyer and Timothy J. Standring have condensed into a representative exhibition of some 80 works on paper. It is the first monographic presentation of Castiglione’s graphic oeuvre in a German-speaking country. DRAWINGS WITH A DELICATE TOUCH

With an almost instinctive mastery of drawing that was every bit the equal of his painting, Castiglione was a unique artist of the 17th century. He committed his motifs to paper with astonishing nonchalance, employing a remarkable technique to do so: he mixed his pigments with linseed oil – probably in response to the rapidly executed oil sketches on primed wooden panels popularized by Rubens and van Dyck – and, depending on how heavily he loaded his brush, could produce everything from flowing, painterly lines to rough, expressive strokes. The spontaneity with which he guided his oil-laden brush across the paper prompted contemporary observers to label his brushwork ‘grazioso’ and ‘facile’: ‘facile’, that is, in the sense of simple but not simplistic, referring instead to the supreme virtuosity of an artist who perfected the skill of seeming effortlessness and apparent ease in tackling what was in fact a challenging task. A FAVOURITE AMONG CONNOISSEURS

Castiglione’s drawings in oils, which have been described as miniature ‘drawn paintings’, were not simply preparatory studies for larger pieces but works of art in their own right; and this no doubt explains the admiration in which they were held by celebrated artists such as Tiepolo and Fragonard. His works were also much appreciated by legendary art aficionados including Count Francesco Algarotti. To this day, the largest assembly of drawings by the artist is owned by no less a figure than Queen Elizabeth II; the Kunsthaus is fortunate to be showing 15 of the finest sheets from the Royal Collection at Windsor Castle. They are joined by works from equally precious holdings, including the Devonshire Collection at Chatsworth House and the Collection Frits Lugt, which is held by the Fondation Custodia in Paris. However, Castiglione’s drawings are only one side to his talents. He is equally peerless in his practice of printmaking. His etchings stand in the tradition of the ‘capriccio’, dealing with subjects that are as enigmatic as they are eccentric, such as scenes from the apocrypha and mythology, played out between objects from time immemorial distributed around the picture space and exposed to the elements. His unmistakeable style is also in evidence in the etchings. A significant part of their appeal lies in the manner of their execution: Castiglione worked with restlessly drawn networks of lines and tiny, intertwined hook strokes that spread across the picture surface almost like natural growths. Moreover, that search for a highly individual formal language most probably explains Castiglione’s unending experimentation with new means of expression. One is the monotype, which he is credited with inventing. Unsurprisingly the monotype process, which involved painting directly onto a plate and then making a print from it, is regarded as a hybrid technique. The result is somewhere between drawing and print, marking Castiglione out once again as a crossover artist working in diverse media, and allowing him to achieve highly dramatic chiaroscuro effects that are without parallel in the graphic arts of his time. THE APPEAL OF THE SEEMINGLY UNFINISHED

Castiglione’s attachment to an aesthetic of the apparently unfinished and fragmentary gives his work a decidedly modern aspect. Many of his etchings look like exercises that are not fully elaborated, placing them on a level with the prints of his great contemporary Rembrandt. Castiglione’s drawings, meanwhile, are often committed to paper so swiftly that it is literally possible to retrace the process of their creation. They lack finish – deliberately so, because Castiglione wanted viewers to be enthralled by his virtuoso signature.

‘Baroque Brilliance’ is supported by the Kythera Kultur-Stiftung, Düsseldorf, the Wolfgang Ratjen Stiftung, Vaduz, the Tavolozza Foundation and another foundation that wishes to remain anonymous. 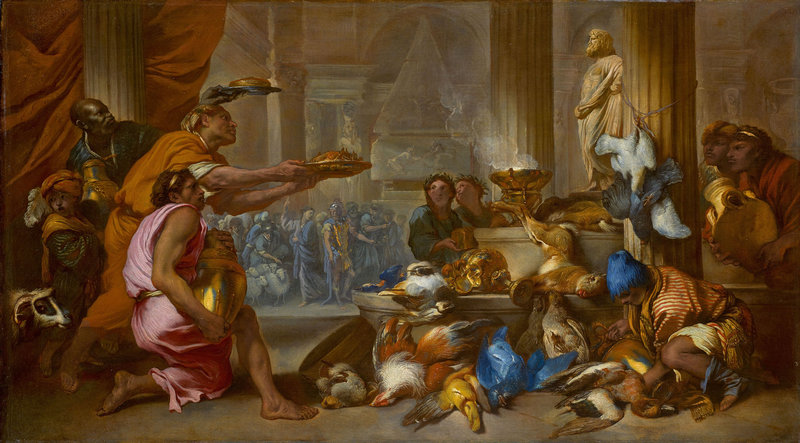 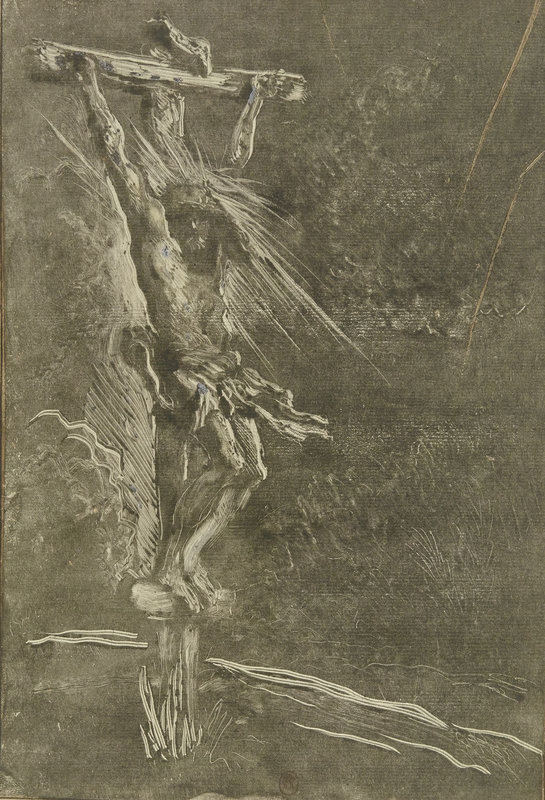 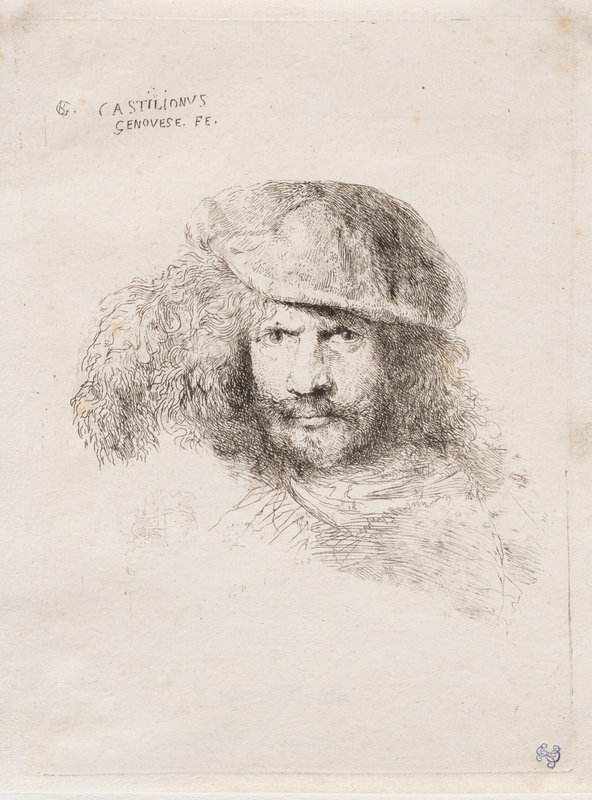 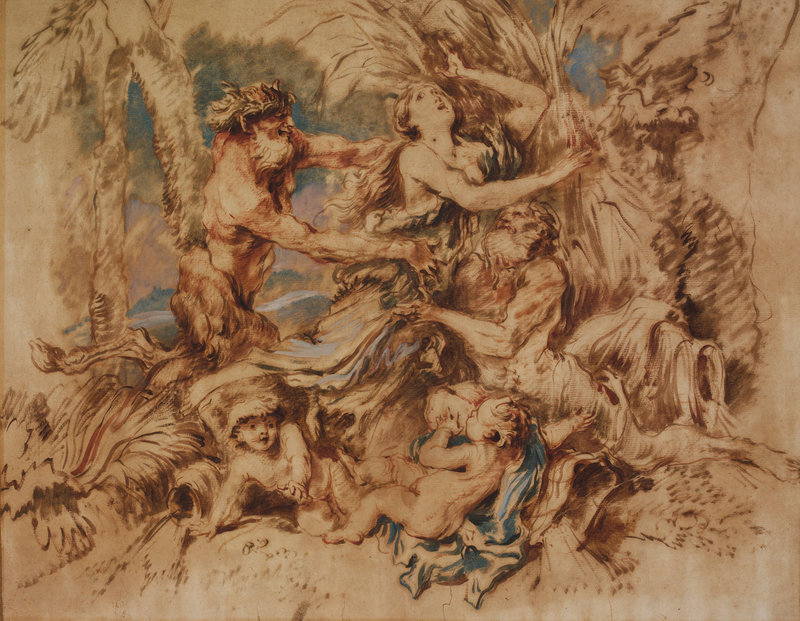