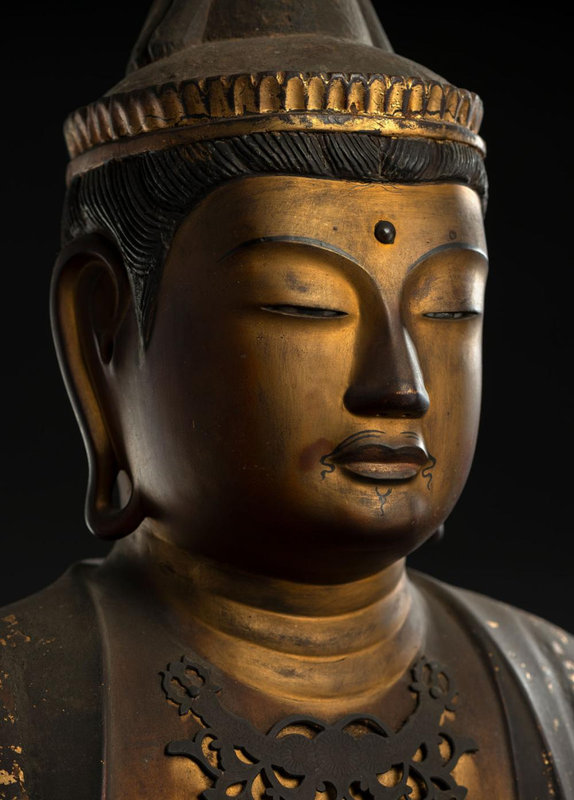 standing in very slight tribhanga pose and wearing the typical skirt and shawls of a Bodhisattva, with chest and arm ornaments of gilt copper with glass beads, inlaid eyes and urna, the hands holding a staff surmounted by a round disc set on a cloud swirl.

Note: The sun disc is the attribute of Nikkô Bosatsu, the Bodhisattva of solar radiance. Usually, the disc is painted red, bearing the image of a crow and is mounted on a lotus blossom which the Bosatsu holds by its long stem with both hands. The companion figure is Gekkô Bosatsu, the Bodhisattva of lunar radiance, who holds a silvery disc representing the moon which bears the image of a rabbit. Nikkô and Gekkô Bosatsu are the attendant Bosatsu of Yakushi Nyorai, together forming a Yakushi Triad (Yakushi sanzon). Yakushi is the Buddha of medicine and healing and the two Bosatsu symbolize the unremitting healing and protection from illness throughout day and night. The current figure of Nikkô Bosatsu stood on the left-hand side of Yakushi Nyorai. The history of Yakushi cult in Japan goes back to the late 7th century. Then, it had a stronger following at the imperial court and among the nobility than among the common people. Therefore, early Yakushi triads were housed in temples affiliated with the court nobility. In the Edo period the triad was worshipped in temples affiliated with the Tendai or Jodo school of Buddhism