A fragmentary wood figure of a Bosatsu, Japan, Heian period

A fragmentary wood figure of a Bosatsu, Japan, Heian period 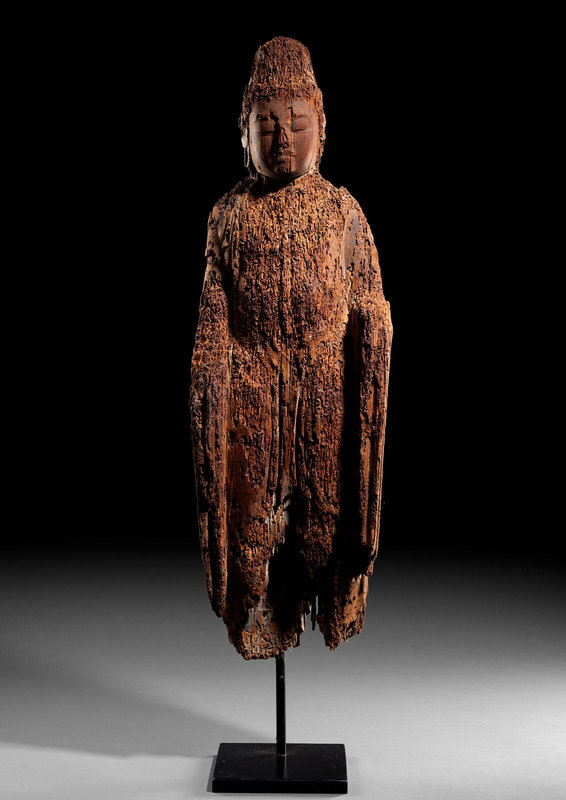 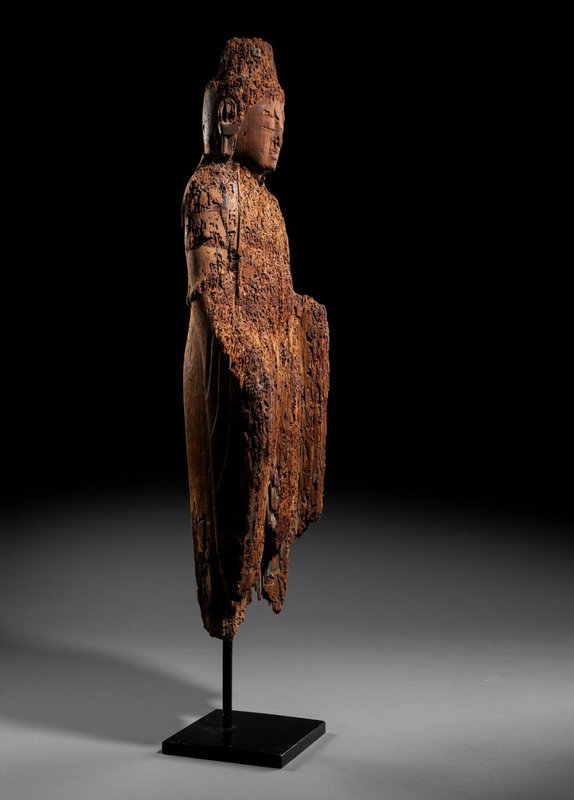 Standing in slight tribhanga, mounted. Due to damage this figure is difficult to identify. However, a shawl covering the shoulder and a bracelet are recognizable along the right back side of the body. These two features and the wide strand of hair arranged over the ear are characteristics of a Bosatsu. A more accurate identification is not possible since head ornaments and hands are lost.

Note: Heian sculptures in this condition are not totally unknown and occasionally appear on the art market. Worked in the single-block technique (ichiboku-zukuri), this sculpture was most probably covered by a thin layer of paint or lacquer making it easy for insects to work themselves through the outer layer of the wood and leave holes and long tubular channels. The head however is relatively intact, for possibly either of two reasons. Sometimes the face was covered by a lacquer paste which allowed for a more delicate modelling of the facial features. The paste protected the wood from insect attacks as long as it did not flake off (see K. Nishikawa and E. J. Sano, The Great Age of Japanese Buddhist sculpture AD 600-1300, Seattle/London 1982, no. 7). On the other hand, a damaged face could have been restored at some point in time. Then, the layer of damaged wood was removed and the face recarved (see G. Gabbert, Buddhistische Plastik aus China und Japan, Wiesbaden 1972, no. 15). The face on the current sculpture is in relatively good condition and prominently shows the wood grain, a typical feature of Heian Buddhist sculpture. The fact that Buddhist sculptures with such extensive damage have survived, demonstrates the reverence and respect payed to these objects of worship. Relegated to storehouses or attics of large temple building after being replaced by new icons, they were here prey to marauding insects.