the cup in the form of a deep widely flaring lotus leaf, the dark reddish-brown horn naturalistically carved around the exterior with lotus buds and flowers borne on leafy tendrils curling up and around the body, forming to one side a large handle and ribbon-tied to the base to form a short foot on which stand two large cranes, the interior carved with a small frog looking up to the rim.

Note: The fashion for very dark almost black rhinoceros horn carvings emerged in the 18th century and the present cup is a fine example of this trend. According to Jan Chapman, The Art of Rhinoceros Horn Carving in China, London, 1999, p. 62, especially larger-sized rhinoceros horn cups were stained, generally using pine soot and squid ink as black dyes to achieve a rich matt black colour.

The decoration of cranes was a popular one amongst horn carvers, see a cup in the Chester Beatty Library, Dublin, carved with a pair of cranes against rocks, illustrated ibid., pl. 253; and another vessel from the collection of Dr. Ip Yee, sold in our Hong Kong rooms, 19th November 1984, lot 94. 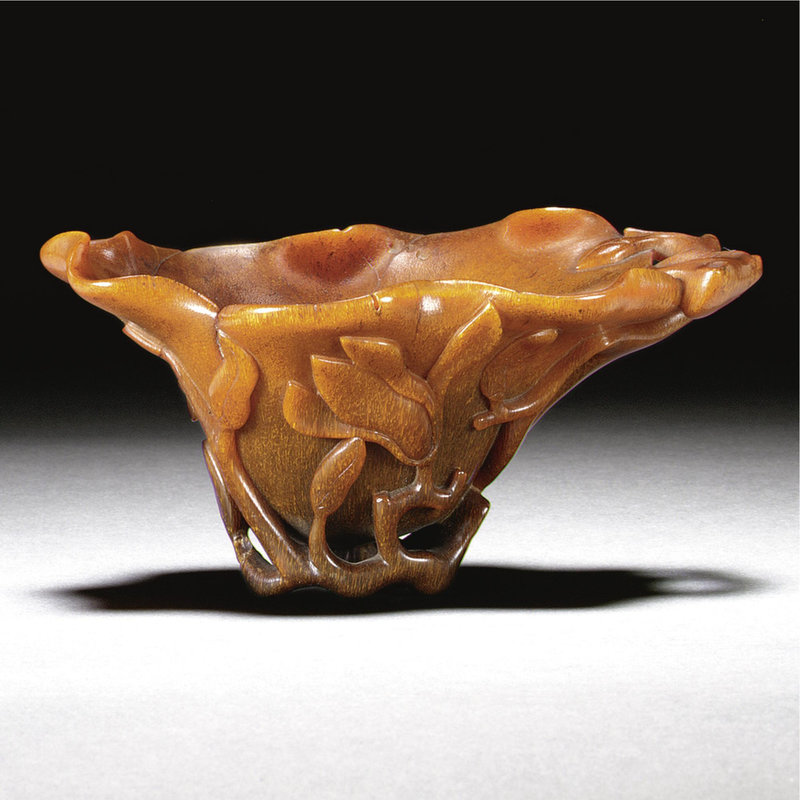 Note: The magnolia blossom is one of the most popular decorative motifs found on rhinoceros horn carvings. See a cup shaped as a magnolia blossom and decorated with magnolia buds in relief, in the Chester Beatty Library, Dublin, illustrated in Jan Chapman, The Art of Rhinoceros Horn Carvings in China, London, 1999, pl. 211, together with another cup, pl. 378. Compare also a cup from the Asian Art Museum of San Francisco sold in our Los Angeles rooms, 20th October 1974, lot 126; and another sold in our Hong Kong rooms, 20th May 1987, lot 637. of deep U-shape with widely flaring rim,  the reddish-brown horn naturalistically carved as a tree trunk and in high relief around the exterior with leafy boughs laden with fruiting finger citrons, the gnarled vines creating the handle at one end and creeping over the rim into the interior of the vessel.

Note: The finger citron (citrus medica) is a motif rarely found on rhinoceros horn carvings and more commonly appears in combination with other symbolic plants. See a cup shaped as a basket with gnarled branches of finger citron and fruiting lichee similarly extending from the interior on to the sides, sold in our New York rooms, 23rd April 1987, lot 278. of deep U-shape with widely flaring rim, the dark reddish-brown horn carved in high-relief around the exterior with leafy fruiting grapevine and to one side with a large bushy-tailed squirrel, with the gnarled vines creating the handle at one end, the interior with overlapping leaves and a large bunch of grapes falling over the rim into the vessel.

Note: For another example see a cup in the Chester Beatty Library, Dublin, illustrated in Jan Chapman, The Art of Rhinoceros Horn Carving in China, London, 1999, pl. 243. See also a cup carved with grapes, from the estate of Cyrus Jasperse, sold in our New York rooms, 13th June 1979, lot 133; and another sold in these rooms, 5th June 1981, lot 135.

The 'squirrel and grapes' motif was especially popular in the Ming and Qing dynasties and can be found on ceramics and other works of art. It is a rebus for long life and many generations of sons and grandsons. 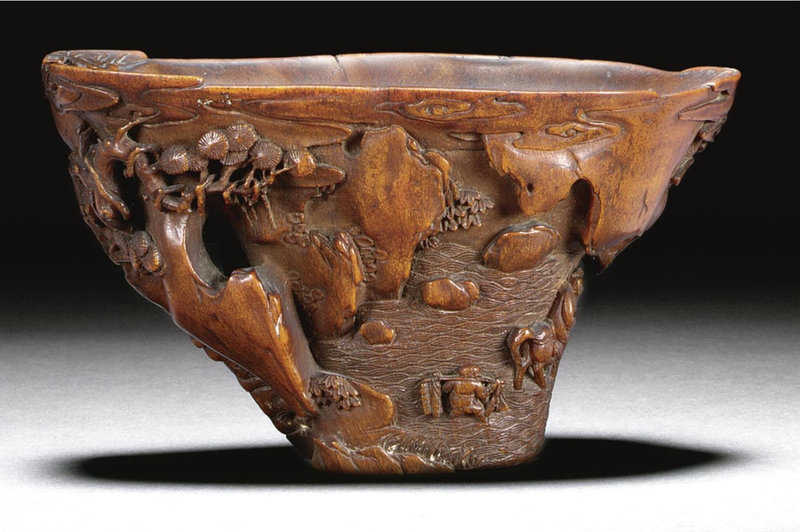 of tapering truncated form, the rich reddish-brown horn finely carved around the exterior with a groom leading a sage on horseback across a stream, closely followed by an attendant carrying provisions, all set within a mountainous landscape of overhanging rocks and swirling mist, set to the side with a handle formed from the trunk of an old gnarled pine tree.

Note: It is rare to find rhinoceros horn cups decorated with figures and the present cup is especially fine for its meticulous and deep carving of this rare subject matter. Carvings of this type are influenced by painted handscrolls as the design extends from one side to the other and can be appreciated by turning the cup as if unfolding a scroll painting. The carving on the present cup is detailed with special attention paid to the two attendant figures helping their master on horseback cross the river. Jan Chapman in The Art of Rhinoceros Horn Carving in China, London, 1999, pp. 201-202, notes that scholars depicted on horseback are frequently accompanied by a groom or servants who help them and are shown always dressed in the traditional clothing, with the scholar in a long gown and the attendants in short jackets, trousers and sandals.

See a cup carved with a scholar standing on a bridge over a ravine, in the Avery Brundage Collection, illustrated ibid., pl. 275; and a vessel decorated with figures in landscape, in the Chester Beatty Library, Dublin, included ibid., pl. 77. Compare also a cup sold in these rooms, 12th July 2006, lot 1; and another sold in our New York rooms, 20th March 2002, lot 292, although depicting the Eight Daoist Immortals but the handle of the cup similarly carved as an openwork pine tree.