Marbled ceramics from Song and Jin dynasties sold at Sotheby's London, 15 May 2007

Marbled ceramics from Song and Jin dynasties sold at Sotheby's London, 15 May 2007 the elegant pear-shaped body rising from a short spreading foot to a tall flaring neck with everted rim, well-potted from marbled clays of buff and dark brown tone creating an irregular pattern of whorls in imitation of marble, covered overall with a translucent ivory coloured glaze.

Large marbled wares of the Song period, such as the present bottle vase, are extremely rare and more common are small vessels such as bowls and dishes. No other similar example appears to be recorded, although a marbled globular jar, in the Jilin Provincial Museum, is illustrated in Jilin Shen Bowu Guan, Beijing, 1992, pl. 174.

For the form of this vase see a plain yuhuchun ping illustrated in Zhongguo taoci quanji, vol. 7, Shanghai 2000, pl. 216, of very similar size and elegant shape. the body of deep U-shape with gently curved sides rising from a flat base to an indented rim, finely potted with cream and dark brown coloured clays creating irregular flower-like whorls, covered inside and out with a transparent ivory coloured glaze.

Note: A marbled bowl of similar shape, from the Eumorfopoulos Collection, is in the Victoria and Albert Museum, London, inventory no. C.602-1918; and another slightly smaller bowl of related form with irregular marbling is illustrated in Zhongguo taoci quanji, vol. 7, Shanghai, 2000, pl. 198, from the collection of the Henan Provincial Museum and attributed to the Dangyangyu manufactories. Another smaller bowl of this marbled body is published in Regina Krahl, Chinese Ceramics from the Meiyintang Collection, vol. Three (two), London, 2006, pl. 1528. the body with gently curved flaring sides rising from a short straight foot to an inverted rolled rim, covered overall in a pale cream glaze pooling in teardrops down the exterior and falling short of the foot revealling the buff coloured body, freely decorated to the interior with dark chocolate brown splashes in imitation of marble. Note: A closely related cup is published in the Illustrated Catalogues of Tokyo National Museum. Chinese Ceramics I, Tokyo, 1988, cat.no. 579, together with a cupstand; another, from the collection of Lord Cunliffe and included in the Oriental Ceramic Society exhibition Arts of the Tang Dynasty, Victoria and Albert Museum, London, 1970, cat.no. 63, was sold at Christie's London, 19th April 1983, lot 36. 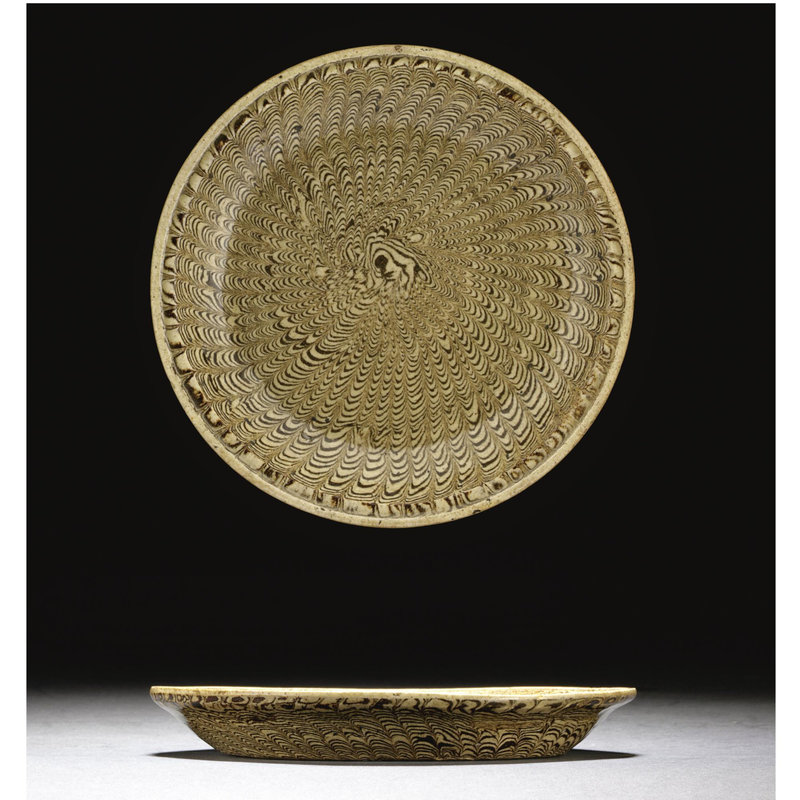 the shallow flaring sides rising from a flat base to an everted lipped rim, finely potted with striated cream and dark brown coloured clays creating a radiating feathered pattern and encircled at the rim with a band of cream coloured clay, covered inside and out with a transparent ivory coloured glaze.