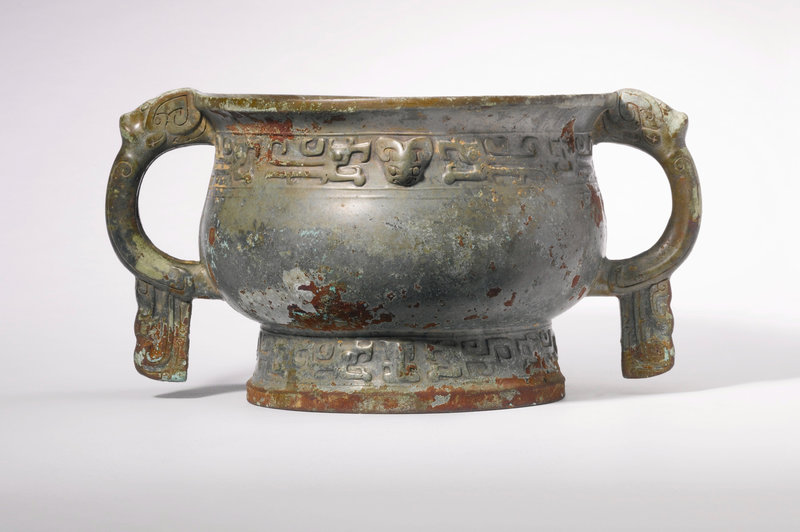 boldly cast with a swelling body below an everted rim with a band of eight archaistic kui dragons between bow-string borders and divided into four pairs by a small animal mask on each side, the vessel flanked by a pair of loop handles each issuing from a bovine mask and terminating in a hooked pendent tab, a similar band of kui dragons confronted on a stylized mask encircling the slightly flared foot, the interior cast with a three-character inscription reading Ran Fu Kui, with a mottled pale greenish-gray patina and some malachite and ferrous encrustation.

Note: Jessica Rawson notes in Western Zhou Ritual Bronzes from the Arthur M. Sackler Collections, Washington D.C., 1990, p. 415, that these types of gui vessels are more common in early Western Zhou, and lists five other provenanced examples, including one from Liaoning Kezuo Shanwanzi illustrated in Wenwu, 1977.12, p. 23-33, fig. 55.  Another Western Zhou gui with vertically ribbed, rather than plain body below the dragon band, can be found illustrated in the Catalogue to the Special Exhibition of Grain Vessels of the Shang and Chou Dynasties, National Palace Museum, Taipei, 1985, pp. 248-9, pl. 39.

The dating of this lot is consistent with the results of Oxford thermoluminescence test no. 366m78. 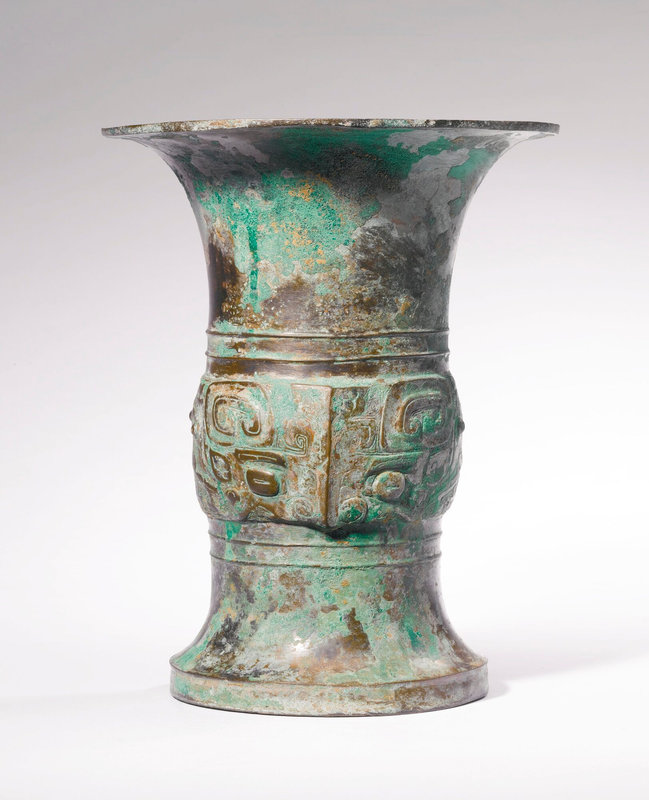 rising from a splayed foot to an everted rim, the central section cast in relief with two taotie masks with bulging eyes on a leiwen ground divided by narrow flanges between double bowstring bands, the dark brownish-green patina with some light malachite encrustation, Japanese wood box and cover (3).

Provenance: An old Japanese collection before the 1950s and thence by descent. of ‘S’-shaped profile, the rounded belly rising from a splayed foot with molded foot ring, surmounted by a wide trumpet-shaped mouth, cast with a narrow frieze above a single bow-string band of two pairs of backward-looking kui dragons with hooked crest and ‘S’-shaped bodies, bisected by two raised animal heads, with malachite green and cuprite reddish encrustation, a lengthy later added inscription to the base of interior.

Note: This piece was acquired from Alfred Salmony, the renowned art historian in Far Eastern arts who served as curator of the Cologne Museum of the Far East from 1920 to 1933. In 1934, he immigrated to the U.S. and became the Oriental specialist at the Institute of Fine Arts, New York University. In New York, Dr. Salmony helped C.T. Loo on several catalogues including the ground-breaking Sino-Siberian Art in the Collection of C.T. Loo. This piece is accompanied by an unpublished essay written by Dr. Alfred Salmony, which is available upon request. 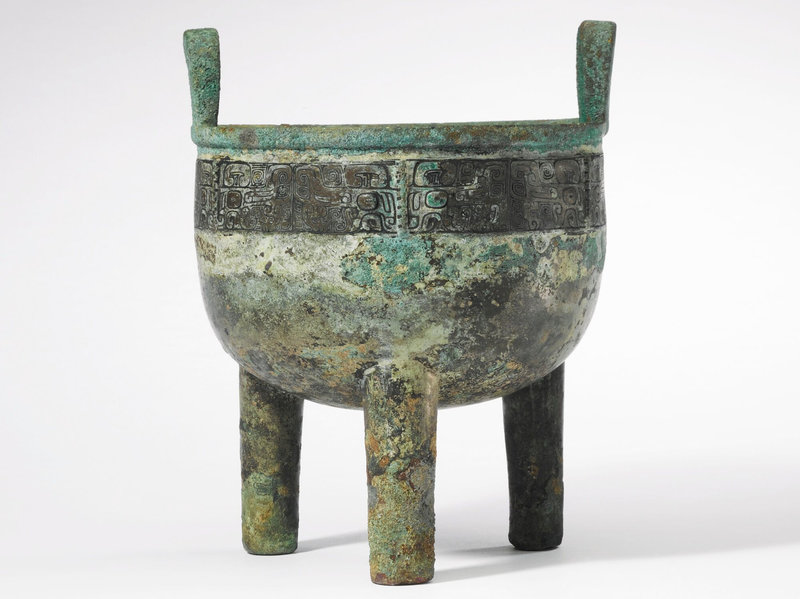 the deep rounded body supported on three straight columnar legs, cast with a single frieze of five taotie masks, each centered with a pair of slit-eye bosses on a narrow vertical flange, the lipped rim set with a pair of upright handles, the silvery gray patina with some encrustation, a single pictogram cast to the interior reading ge.

Provenance: Acquired in New York in the 1940s and thence by descent.

Note: The single pictogram that appears on the inside wall of this vessel also appears on a large number of archaic bronze vessels and oracle bones. It can be translated as 'ge', a clan sign that depicts an axe-like weapon that was commonly used in the Shang and Zhou dynasties. A ding with a similar taotie mask band is illustrated in Jessica Rawson, Western Zhou Ritual Bronzes from the Arthur M. Sackler Collections, vol. IIB, Washington D.C., 1990, no. 13. T. raised on three tubular legs with taotie and ring-lined terminals, the rounded body cast with taotie masks centered on raised flanges, the flat everted rim set with two upright loop handles, the sides crisply cast with a band of stylized dragon motifs interspersed by further raised flanges, above a wide band of diamond diaper enclosing bosses, all on a finely defined leiwen ground, the interior cast with a four-character inscription, the first a pictogram then followed by Zuo Fu Ji (Made for Father Ji), the patina of a deep malachite-green.

Note: The ding bears a four-character inscription starting with a clan sign. Compare a ding with similar decoration of a lozenge diaper enclosing bosses on the body, but with plain legs and leiwen design around the rim, illustrated in Shaanxi chutu Shang Zhou qingtongqi, vol. 1, Beijing, 1979, p. 42, pl. 27; and another from the collection of Professor Bullock included in the exhibition Ancient Chinese Bronzes from an English Private Collection, Eskenazi, London, 1999, cat. no. 4. Another related ding excavated in 1985 from a tomb site near Anyang, Henan province, is included in Zhongguo qingtongqi quanji, vol. 2, Beijing, 1997, pl. 23; and one is illustrated in Bernhard Karlgren, 'New Studies on Chinese Bronzes', The Bulletin of the Museum of Far Eastern Antiquities, No. 9, Stockholm, 1937, pl. XXXII. the rounded sides tapering on one end to the long curved channeled spout, cast in relief around the sides and on the spout with two bands of double-headed-S-dragons with raised bosses for eyes and at mid-body, the handle cast as an arched dragon with coiled tail shown biting the rim, all raised on four flattened supports cast as single-footed upright dragons. the flat top cast in low-relief with a dragon design and surmounted by a loop for suspension, the body of pointed elliptical section, each bilateral section cast with two groups of nine bosses arranged in three registers within rectangular enclosures, the registers alternating with bands of repeated curlicues, an inscription of one character reading tu between the two registers.