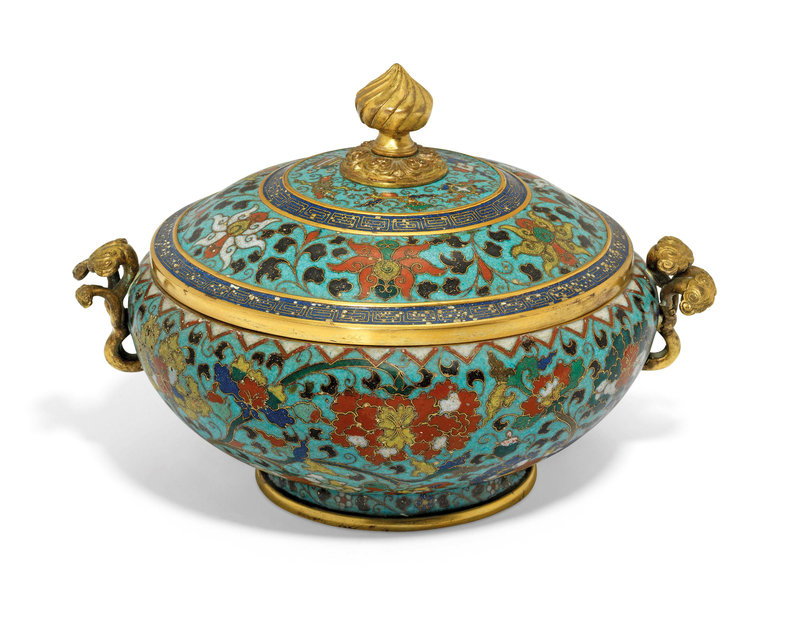 The circular bowl is decorated to the exterior with peonies rising from leafy and scrolling stems. The base is similarly decorated with a central lotus blossom. The slightly stepped cover has a bud-form finial and is decorated with a band of six large lotus heads amongst leafy tendrils and a band with auspicious symbols. Each band is bordered with classic scrolls on a blue ground. The vase is decorated to each side with a bird on a flowering branch, including a kingfisher and a parrot, all on a turquoise ground. Each side of the neck and foot is decorated with a large lotus head with leafy tendrils.

Note: Although the motif of birds sitting on a flowering branch is a very popular design for cloisonné enamel of the late Ming period, it is very rare to find a depiction of a kingfisher on such vessel. The deep bowl is decorated to the centre with a large carp and a smaller carp leaping from waves above rocks. The gently rounded sides are decorated to the interior with stylised chrysanthemums with leafy scrolls below a band of stylised flower heads encircling the rim. The exterior is similarly decorated with six large lotus heads divided by six smaller blossoms interlinked by leafy tendrils, all between a band of chrysanthemum blossoms encircling the mouth rim and a lappet band to the foot.

Note: Cloisonné enamel vessels of this period decorated with fish are rare to find. Compare a cloisonné enamel dish decorated with a single fish and dated to the second half 15th century, illustrated by Brinker and Lutz in Chinese Cloisonné: The Pierre Uldry Collection, New York, 1989, pl. 33. Another bowl with fish motif was sold at Christie's London, 9 November 2010, lot 234.