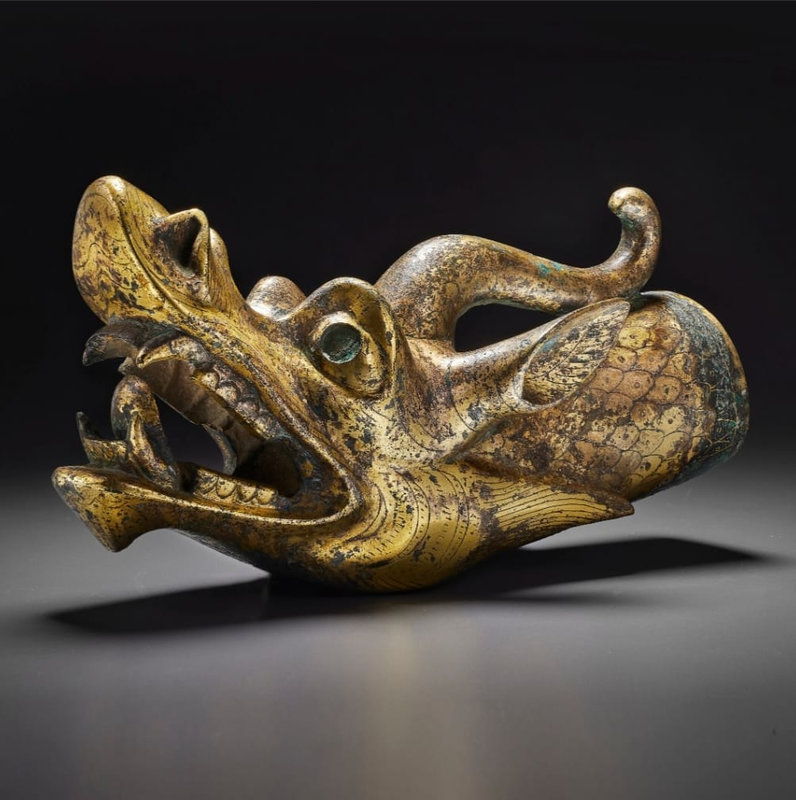 The dragon head is cast with an upturned snout and flared nostrils above the mouth which is open to reveal prominent teeth and a long tongue. A single S-shaped horn curves over the back of the head onto the neck. The head is finely incised with concentric wavy lines on the muzzle, and the horn and neck are incised with scales.

Property from the collection of Jonathan Benthall and Zamira Menuhin Benthall

Created during the Western Han period (206 BC–AD 9), this handsome gilt-bronze chariot fitting representing the head of a dragon would have emblemized the elevated status of the chariot’s owner. The long snout, large eyes, flared nostrils, open mouth, bared teeth, and out-turned upper lip project the dragon’s immense power, just as the swept-back ears, mane, and S-curved horn suggest forward motion, as if blown by the wind; in fact, this interpretation of the dragon would become the model for dragons of all succeeding periods. Although bronzes of the Shang (c. 1600 BC–c. 1046 BC) and Western Zhou (c. 1045 BC–771 BC) periods relied solely on cast decoration for embellishment, bronzes of the Warring States period (475–221 BC) often employed inlays of gold and silver for decorative effect; by the Western Han, the taste for gold had asserted itself with the result that many bronze vessels, implements, and fittings, were gilt, as evinced by this compelling chariot fitting. Symbolizing wealth, power, and elevated status, fully embracing the new taste for gold, and setting the course for future representation of dragons, this terminal is the quintessential expression of the arts of the Western Han period.

Known as “terminals” in English, fittings of this type are usually termed yue in Chinese, though they are sometimes also called wushi. This terminal originally capped and concealed the outer end of the wooden draught pole yuan of a horse-drawn chariot chema. The yoke, or e, placed over the horses’ front shoulders, would have been hitched to a horizontal crossbar, known as a heng, which was in turn attached to the draught pole—alternatively termed a tongue or shaft in English, and a zhou in Chinese—the ensemble transmitting the horses’ forward movement to the chariot itself. A viewer facing the horses could have seen this gilt bronze terminal between the horses, more or less at the level of the tops of their forelegs, depending upon the height and possible curvature of the draught pole.

A model of an ancient chariot reconstructed in the mid-1930s features a terminal at the end of the draught pole, the model suggesting the original function and placement of this terminal.1 In addition, a Tang-dynasty (AD 618–907) painting from Mogao Cave 17 at Dunhuang, Gansu province, dated by inscription to AD 897 and now in the British Museum, London (1919,0101,0.31), represents the Buddha Tejaprabha (Chinese, Chisheng Guangfu) riding in an oxcart pulled by a single bullock harnessed between the cart’s double draught poles.[ii] Each draught pole has a gold terminal in the form of lotus bud at its outer end. The Classic of Filial Piety, a handscroll in the National Palace Museum, Taipei, with calligraphy by Emperor Gaozong (r. 1127–1162) and illustrations by Ma Hezhi (active c. 1130–1170), depicts the Emperor in a horse-drawn carriage, its draught-pole ends appropriately in the form of dragon heads. (Fig. 1) As chariot and carriage structures and components, once established, changed little over the centuries, such paintings indicate how draught-pole terminals were used in traditional times, even though they may date many centuries later than the present Han-dynasty terminal.2

Among the most powerful emblems in Chinese art and culture, the dragon, or long in Chinese, traditionally symbolized auspicious powers, particularly control over water, including not only rivers, lakes, and oceans, but rainfall, hurricanes, and floods as well. In the early, dualistic view of the world that Daoism would espouse, the dragon came to represent the yang, or male forces of the universe, while its counterpart, the phoenix, or fenghuang, came to stand for the yin, or female forces. In due course, the dragon was adopted as the symbol of the emperor, as the personification of yang forces, just as the phoenix was appropriated as the symbol of the empress, as the embodiment of yin forces.

Chinese belief in dragons stretches back to prehistoric times, and dragons frequently appear as embellishment on bronze vessels of the Shang and Zhou (c. 1046 BC–256 BC) dynasties. By the Han dynasty (206 BC–AD 220), when this terminal was made, Daoists had incorporated the dragon into their scheme of directional symbolism, associating it with the east and assigning it the color azure qing. The walls of Han tombs often include representations of the four directional symbols, or sixiang, on the appropriate walls: the azure dragon (qinglong) of the east, the vermillion phoenix (zhuque) of the south, the white tiger (baihu) of the west, and the black tortoise (xuanwu) of the north, the tortoise often shown intertwined with a snake.

Though Chinese tradition asserts that the chariot was invented during the Xia dynasty (possibly 2070 BC–possibly 1600 BC), the horse-drawn chariot is believed to have been introduced in China in the thirteenth century BC, during the Shang dynasty (c. 1600 BC–c. 1046 BC), probably from without.3 The earliest archaeological evidence of chariots in China comes from a burial site discovered in 1933 at Hougang, Anyang, Henan province and dates to the reign of Shang-dynasty King Wu Ding (r. c. 1250 BC–1190 BC). (Known in traditional times as Yinxu, Anyang was the last capital of the Shang dynasty, the royal court based there between c. 1300 BC and c. 1046 BC.) From the Shang through the Warring States periods, chariots were typically two-wheeled vehicles drawn by two or four horses harnessed to a single draught pole. Excavated Shang and Western Zhou chariots are typologically uniform, with only such minor differences as length of the draught pole, size of the chariot box, width of the axle, and number of spokes in the wheels. Indeed, the chariots of these two periods are so similar that there can be no doubt as to their filiation. The war-chariot crew consisted of a driver, an archer, and sometimes a third warrior who was armed with a spear or dagger-axe.

The chariot initially was a vehicle for hunting and for projecting status, its military role apparently limited to serving as an elevated, mobile command platform, with no evidence that it was used in battle in significant numbers. After the Zhou conquest of the Shang in c. 1046 BC, however, use of the chariot in warfare became much more widespread; in fact, use of war chariots may have played a decisive role in the Zhou overthrow of the Shang.

Massed-chariot warfare reached its peak between the eighth and fifth centuries BC but had become all but obsolete by the end of the Warring States period due mainly to the increased use of crossbows, pikes, and long halberds and to the adoption of horse-mounted archers and of standard cavalry units, all of which proved more effective in battle than war chariots. Even so, chariots continued to serve as command posts for officers during the Qin (221–206 BC) and Han (206 BC–AD 220) dynasties. And, of course, the role of the chariot as prestige object remained, as evinced by the bronze chariots discovered in the tomb of China’s First Emperor, Qin Shi Huang (259–210 BC; r. 221–210 BC). Although it might have graced the chariot of any wealthy Han figure of elevated stature, this terminal likely originally adorned the chariot of a high-ranking, Western Han military commander.

Excavations at Anyang have revealed that chariots were outfitted with bronze fittings already by the Shang dynasty, likely more for symbolic and tutelary reasons than for decorative effect.4 Fittings recovered from the horse-and-chariot pit in Tomb M20 at Xiaotun, Anyang, were cast in the form of the head of a fierce animal and recall the ferocious faces that appear at the front of some Shang bronze gong wine vessels.5 Foreshadowing the evolution of the present terminal, tubular draught-pole terminals had evolved by the Western Zhou period, as indicated by excavations at Zhangjiapo, Shaanxi province; even so, such terminals typically boast a Shang-style ferocious animal head that turns to look over its back. Sumptuous bronze terminals in the form of more readily recognizable animals and embellished with inlays of gold and silver appeared during the Warring States period, such as the famous terminal—perhaps representing the head of a deer-like quadruped—that was excavated at a Wei-state cemetery at Guweicun, Huixian, Henan province, in 1951 and now displayed in the National Museum of China, Beijing.6 The most compelling Warring States-period examples were unearthed at Jincun, near Luoyang, Henan province, and include both the gilt and silver-inlaid bronze, bull-head terminal in the British Museum, London (1934,0216.3),7 and the gilt and silvered bronze, dragon-head terminal in the U.S. National Museum of Asian Art’s Freer Gallery, Washington, DC (F1932.14a-c),8 which is the direct antecedent of the present terminal. (Fig. 2)

Despite its descent from Warring States-period forerunners, this gilt bronze terminal is remarkably similar in style to the Western Han gilt bronze dragon-form fitting excavated in 1987 from a Han tomb at Dongquan, Changle county, Shandong province,9 confirming its second to first century BC origins. The long snout and bulging eyes set beneath high, arched brows find parallels in both the excavated example and in the Western Han gilt bronze dragon that Eskenazi exhibited in New York in March and April 2000, as do the tufts of fur at the back of the jaw and the U-shaped scales, each with a dot at its center, that enliven the neck.10 And this dragon’s out-turned upper lip, long ears, large eyes under arched brows, tufts of fur at the end of the jaw, and dotted, U-shaped scales also find kinship in those of a Western Han cold-painted, earthenware tomb sculpture representing a winged beast, or chimera, in the collection of the Art Institute of Chicago (1997.337).11

From the collection of Jonathan Benthall and Zamira Menuhin Benthall, this terminal has a distinguished provenance and an esteemed record of exhibition and publication. Noted anthropologist Jonathan Benthall, son of Sir Arthur Paul Benthall (1909–1992), was Secretary of the Institute Contemporary Arts, London, from 1971 to 1973 and served as the Director of the Royal Anthropological Institute, London, between 1974 and 2000. Long a staunch advocate for the arts, Zamira Menuhin Benthall is the daughter of renowned violinist Yehudi Menuhin, Baron Menuhin (1916–1999), and is a former governor of the Yehudi Menuhin School in Cobham, Surrey, U.K. The terminal was exhibited at the Ashmolean Museum, Oxford University, from 2002 until 2006 and at the British Museum, London, between 2006 and 2012. And Eskenazi not only exhibited the terminal in New York and London in 2000 and then again in London in 2016, but has published it three times, in 2000, 2012, and 2016, as documented in the catalogue entry.

The powerful design and superb casting combine to make this well-preserved, gilt bronze terminal an engaging and very compelling work of art. Moreover, with an esteemed provenance and a distinguished record of exhibition and publication, this terminal is indeed a rare treasure.