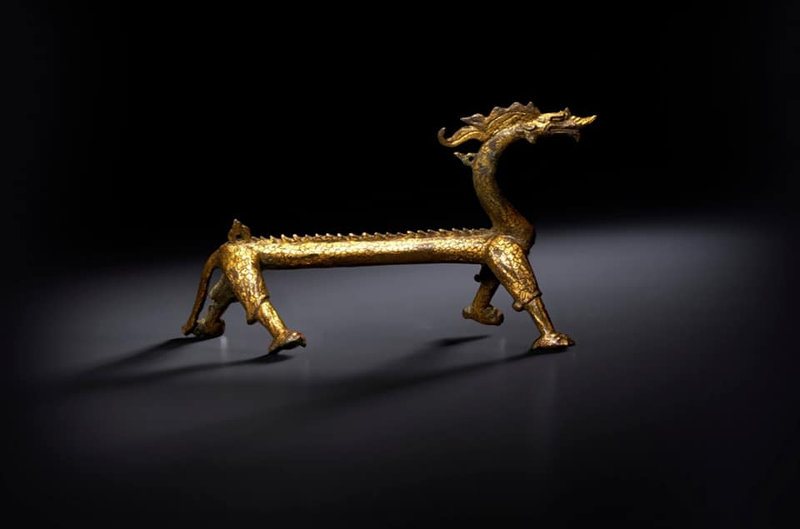 Cast with feet splayed as if mid-stride, the dragon has a long snout, curved neck, and straight ridged body covered in scales. The neck and back are set with pierced tabs.

Note: A bronze dragon of slightly smaller size (4 1⁄16 in.) with similarly rendered scales and curved back is in the collection of the Minneapolis Museum of Art, gift of Ruth and Bruce Dayton, accession number 98.173 where it is dated to the 9th century. The curator notes that small bronze dragons of this type were likely made for the ritual tou longjian (tossing dragons and tallies). The Tang Emperor Xuanzong was a fervent Daoist and dispatched envoys each year to perform this ritual, where dragons were thrown into sites along with prayers, in order to communicate with gods (collections.artsmia.org/art/12028/dragon-china). Another similar Tang dynasty example with curved back in the Museum of Fine Arts, Boston, was exhibited in Arts of the T'ang Dynasty, Los Angeles County Museum, Los Angeles, 1957, cat. no. 102. A Six dynasties example from the Frederick Mayer collection, was included in the exhibition Mostra d'arte cinese, Venice, 1954, no. 159, and subsequently sold at Christie's London, 24-25 June 1974, lot 143. See, also, the very similar Six Dynasties-period gilt-bronze dragon sold at Christie’s New York, 10 December 1987, lot 25.