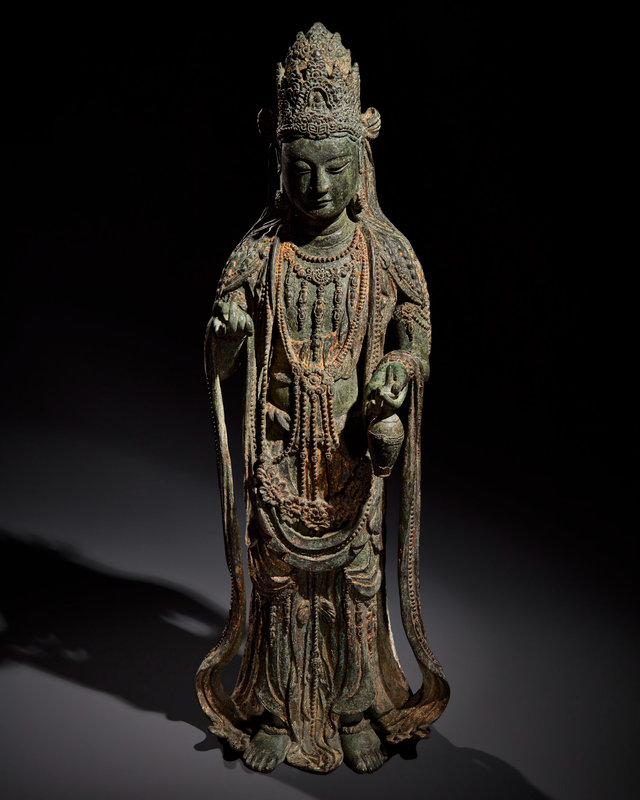 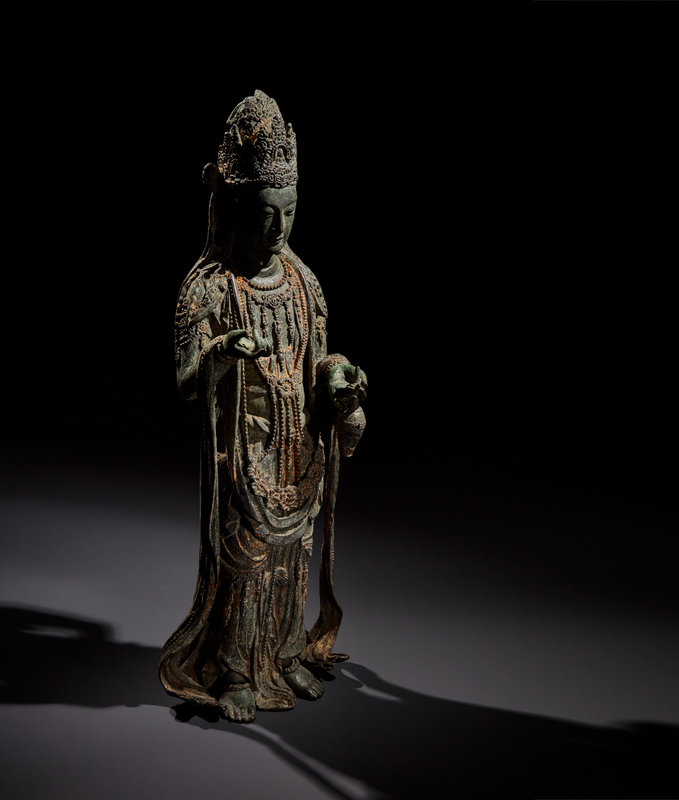 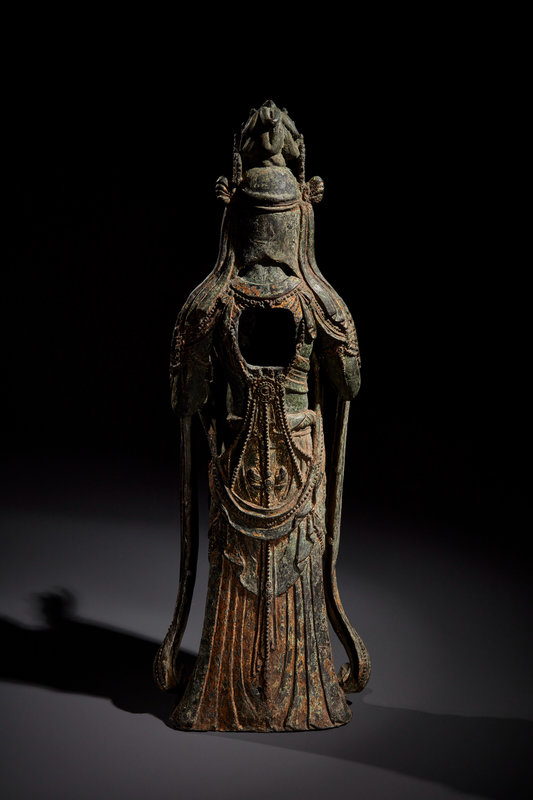 The bodhisattva is shown standing with both hands slightly raised with palms up, and holding in the proper left hand an ambrosia bottle (kundika). He wears a dhoti gathered by a sash around the waist and an abundance of jewelry, including armlets, bracelets, anklets, earrings, and an elaborate multi-strand necklace, as well as a shawl draped over the shoulders and a long scarf laid across the raised arms and falling on either side of the exposed bare feet. The face is cast with fine features below the tall foliate crown centered by a figure of Amitabha Buddha seated amidst vaporous clouds, while the hair is arranged in a tall coiffure atop the head and with long tresses cascading over the shoulders.

From the Dali Kingdom (937–1253) and dating to the late eleventh or early twelfth century, this majestic sculpture of the Bodhisattva Avalokiteshvara, who is known in Chinese as Guanyin Pusa, is not only beautiful and compelling but rare and exceptionally important. This sculpture belongs to a small group of gilt bronzes that depict Guanyin holding a vase and a willow branch, the several sculptures in the group all closely related in style and general appearance; standing 57.2 cm in height (221/2 in), the present image ranks among the tallest sculptures in this group. This sculpture claims a distinguished provenance, having formerly belonged to the prominent collector Grace Rainey Rogers (1867–1943), this provenance documenting that the sculpture was already in the United States during the first half of the twentieth century. The sculpture also passed through the hands of renowned art dealer C.T. Loo (1880–1957), and was published as early as 1924.

The sculpture portrays Guanyin Pusa —more formally known as Guanshiyin Pusa—the Bodhisattva of Infinite Compassion. Guanyin is regarded as a spiritual emanation of Amitabha and is identified by the small representation of Amitabha that appears at the front of the bodhisattva’s crown. The vase that the bodhisattva holds in the left hand likely contains ambrosia, or the nectar of immortality, known in Sanskrit as amrita and in Chinese as both yamilida and ganlu; it’s also possible that the vase is a kundika, or sprinkler for dispensing holy water in purification rituals; both the kundika and the ambrosia bottle are iconographic symbols associated with Guanyin. In the slightly elevated right hand, the figure originally held a willow branch; now mostly broken away, only the branch’s lower end remains. Used to sprinkle holy water, the willow branch was an ancient Chinese symbol of healing, both physical and spiritual. Like the kundika and the ambrosia vase, the willow branch figures among Guanyin’s standard iconographic attributes. The willow branch first appeared in association with Guanyin as an iconographic attribute in the late sixth-century China and became standard after the eighth century, especially in East Asian, as opposed to Indian or Southeast Asian, art.1

A Chinese rather than an Indian iconographic convention, images of Guanyin holding a willow branch and a vase are often termed Yangliu Guanyin, or Willow-Branch Guanyin; images of the Willow-Branch Guanyin from the Dali Kingdom are sometimes also called Bhaisajyaraja Avalokiteshvara, a Sanskrit name that translates into Chinese as Yaowang, or Medicine King, a reference to the healing powers of the willow branch. Such images first appeared in the late sixth century, during the Sui dynasty (581–618), typically in gilt bronze, as witnessed by the example in the Metropolitan Museum of Art, New York (12.161a–c).2 Such early images established a typology that would be followed in later periods, particularly in the Dali Kingdom.

A translation of the Sanskrit name Avalokiteshvara, Guanshiyin means “[The One Who] Perceives the Sounds of the World”, a reference to Guanyin’s ability to hear both the cries of the afflicted and the prayers of supplicants. An earthly manifestation of the Buddha Amitabha, Guanyin guards the world during the interval between the departure of the Historical Buddha Shakyamuni and the appearance of Maitreya, the Buddha of the Future. Chapter 25, Guanshiyin Pusa Pumenpin, of the Lotus Sutra, the best-known of all Buddhist scriptures, describes Guanyin as a compassionate bodhisattva who hears the cries of sentient beings and who works tirelessly to help all those who call upon his name.

Elegantly outfitted in sumptuous trappings, bodhisattvas are presented in the guise of an early Indian prince, a reference to Siddhartha Gautama’s worldly status before he became the Historical Buddha Shakyamuni, implying that as Siddhartha (traditionally, c. 563–c. 483 BC), who was born a crown prince, became a Buddha, so will bodhisattvas eventually become Buddhas, once all sentient beings have attained enlightenment.

Richly attired, bodhisattvas are represented with long hair often arranged in a tall coiffure, or bun, atop the head and with long tresses of hair cascading over the shoulders. A crown sometimes surrounds the high coiffure as revealed by this sculpture. Bodhisattvas wear ornamental scarves, dhotis of rich silk brocade, and a wealth of jewelry that includes necklaces, armlets, bracelets, and anklets. Like Buddhas, bodhisattvas have distended earlobes, but, unlike the Buddhas, they typically wear earrings.

This sculpture originally stood on a lotus base and was presented on an altar. As few original bases of comparable Dali bronze sculptures have survived, the exact appearance of this sculpture’s original lotus base remains unknown. Even so, it is possible that this sculpture’s base might have resembled the double-lotus pedestal of the twelfth-century, Dali Kingdom Acuoye Guanyin in New York’s Metropolitan Museum of Art (42.25.28).3 The base might also have shown some similarity to that associated with the related Willow-Branch Guanyin sculpture in the National Palace Museum, Taipei,4 though the Taipei stand might well be a later replacement for a lost original, as its style corresponds more closely to pedestals of Ming (1368–1644) and Qing (1644–1911) sculptures. (Fig. 1)

When under worship in a temple, the present sculpture would have been backed by either a halo or a mandorla, the lotus-petal-shaped aureole suggesting light radiating from the deity’s body and thus signaling its divine status. That this sculpture and the related ones in this group lack a tenon at the back of the head or between the shoulder blades to secure a mandorla suggests either that a sculpted mandorla was affixed to and supported by the now-lost base or that the mandorla was painted on the wall behind the figure. The openwork silver mandorla associated with the eighth- or ninth-century gold Acuoye Guanyin discovered in 1978 inside the Qianxun Pagoda at the Chongsheng Temple, Dali, Yunnan province suggests the possible appearance of the present sculpture’s original mandorla.

A square opening with gently curved sides high on the figure’s back gives access to the sculpture’s hollow interior; the opening presumably was covered with a gilt-bronze plate whose decoration comported with that of the surrounding matrix. The plate concealed the sculpture’s interior cavity from view and secured in place the dedicatory objects deposited within during the consecration ceremony. The consecration of Buddhist sculptures included an elaborate ritual executed in accordance with canonical texts that describe the process in detail. The most important part of the ritual was the placement of consecratory objects within the sculpture’s interior cavity, those objects typically including small paper sutras and prayer scrolls, glass beads, textile fragments, small bronze seals, small sculptures of metal or wood, seeds, and assorted other special goods. Such dedicatory items were believed to enliven the image and accord it religious efficacy.

Created in the Dali Kingdom (937–1253), this majestic sculpture and its congeners date to the late eleventh or early twelfth century. An independent, devoutly Buddhist kingdom in southwestern China, Dali was coeval with China’s Song dynasty (907–1279) and more or less congruent with present-day Yunnan province. After the 902 fall of Nanzhao, an independent kingdom in southern China, and following the rapid rise and collapse of three successive states in the area, Duan Siping (893–944), seized power in 937 and established the dynastic Dali Kingdom. Unlike Nanzhao, which had had a contentious relationship with the Tang dynasty (618–907), Dali enjoyed cordial relations with the Song, which facilitated artistic and cultural exchange. Duan Siping, his heirs, and the people of Dali claimed to be ethnically Han Chinese, which facilitated relations with Song and which underlies the belief that Dali is a Chinese kingdom.

The derivation of Dali and Liao styles from Tang and the interplay amongst the styles of Song, Liao, and Dali created a complex artistic milieu, the sculptures from Dali, Song, and Liao thus exhibiting many visual and stylistic similarities. Those similarities have resulted in the widely varying attributions of the closely related Guanyin sculptures in this group; in fact, attributions of these sculptures vary from collection to collection, from museum to museum, and range from Five Dynasties (907–960) and Dali Kingdom to Song and Liao.

The stylistic characteristics that favor attribution of this sculpture and its congeners to the Dali Kingdom are numerous and include the squarish face with diminutive chin; the small, almond-shaped eyes that look directly forward; the elaborate crown extensively embellished with cloud motifs (or, in other instances with flowers or jewels); the bows or crown elements that appear on either side of the head immediately above the ears and from which ribbons or strands of pearls descend onto the shoulders; the wealth of jewelry, including the distinctive and very elaborate necklace with multiple strands that descend onto the chest and with a medallion at the waist; the numerous scarves and sashes; and the exquisite finishing of both the front and the back of each sculpture, with details of scarves, jewelry, and drapery folds meticulously articulated on both front and back. These elements find counterparts in such Dali sculptures as the gilt-bronze Willow-Branch Guanyin (Bhaisajyaraja Avalokiteshvara) formerly in the Nitta Collection, Japan (1912–2006) and now in the National Palace Museum, Taipei,5 as well as in the gilt-bronze Thousand-Arm, Thousand-Eye Avalokiteshvara in the Metropolitan Museum of Art (56.223).6 In particular, the cape-like shawl over the shoulders, the low-waisted dhoti, the necklace with strands dangling onto the chest, and the long strand of beads with a medallion at the waist also find parallels in those of a twelfth-century, Dali Kingdom seated bodhisattva in the Yunnan Provincial Museum, Kunming.7

With an impressive record of exhibition and publication and with a long and distinguished provenance, this Willow-Branch Guanyin is a rare and exceptionally important Dali-Kingdom sculpture; indeed, it is a masterwork of Chinese sculpture. Among the tallest in the small group of related sculptures, it well represents the late eleventh- to early twelfth-century interpretation of a continuing iconographic type established during the Sui dynasty.