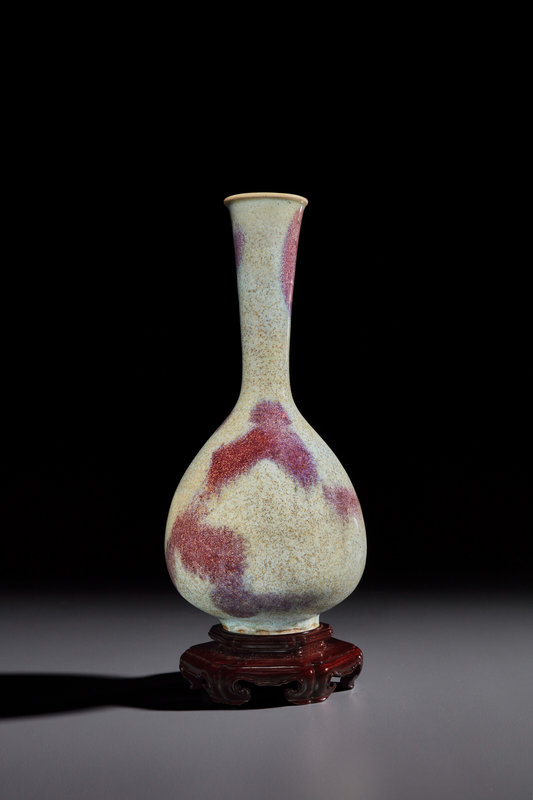 The well-potted pear-shaped vase rises to a tall slender neck gently flaring to the mouth rim, and is covered overall with a pale blue glaze accented with irregular purplish-red splashes.

Literature: Helen D. Ling and Edward T. Chow, Collection of Chinese Ceramics from the Pavilion of Ephemeral Attainment, vol. I, Hong Kong, 1950, no. 13.

Note: un wares were produced at various kiln sites in Henan province and two of the main centers of production were in the modern-day cities of Yuzhou and Ruzhou. Jun has been classified by later connoisseurs as one of the ‘Five Great Wares of the Song Dynasty’ and is celebrated for its bold forms, sophisticated glazes and innovative use of color. The dramatic use of purple and red decoration beginning around the end of the 11th century, is one of the major innovations of the Jun kilns. Purple splashes, like those seen on the present vase, were produced by the addition of copper oxide to the surface of the unfired glaze. In areas where the concentration of copper is high enough for it to re-oxidize superficially on cooling, the color sometimes turns green.

In the 2001 excavation of the Liujiamen Jun ware kiln site in Shenhou, Yuzhou city, Jun ware shErds decorated with large red and purple areas were found in the late Northern Song strata. See ‘Liujiamen junyao fajue jianbao’ (Brief of the Excavation of Jun Ware at Liujiamen), Wenwu (Cultural Relics), 2003, no. 11, fig. 13 and 19.

A similar Jun vase is in the Percival David Collection and illustrated by R. Krahl and J. Harrison-Hall, Chinese Ceramics: Highlights of the Sir Percival David Collection, 2009, London, pp. 36-7, no. 12, PDF 92. The authors note that Northern Song tomb murals show bottles of this shape being used to display a single flower stem. Later during the Jin and Yuan periods, yuhuchunping became fashionable containers for wine. In a mural found in a tomb in Yuquancun, Shanxi, dated to Dading ninth year of the Jin dynasty (1169), a banquet scene is depicted, in which an attendant is shown carrying a yuhuchunping wrapped in a towel, suggesting warm wine is contained within.

In his discussion of a purple-splashed Jun vase sold at Christie’s Hong Kong November 2017, lot 2905, Qin Dashu of Peking University cites a similar Jun vase, but packing the purple splashes, excavated from an early a Jin-period tomb in Jinshanjin, Beijing.

The Percival David and and Jinshanjin tomb vases share several commonalities, including a small mouth measuring about one third of that of the body; a long, slightly flared neck which tapers towards the middle of the vase, and an elegant pear-shaped body. Towards the mid-late Jin to early Yuan period, this form experienced a transformation- the mouth became more flared and the neck became shorter. This change of form is even more prominent on Yuan-dynasty pieces, such as the Jun yuhuchunping excavated from the tomb of Feng Daozhen, dating to Zhiyuan second year (1265).

The result of Shanghai Museum thermoluminescence test no. 036 is consistent with the dating of this lot.