A superb and extremely rare cloisonné enamel dish, Jingtai incised six-character mark in a line and of the period (1450-1456)

A superb and extremely rare cloisonné enamel dish, Jingtai incised six-character mark in a line and of the period (1450-1456) 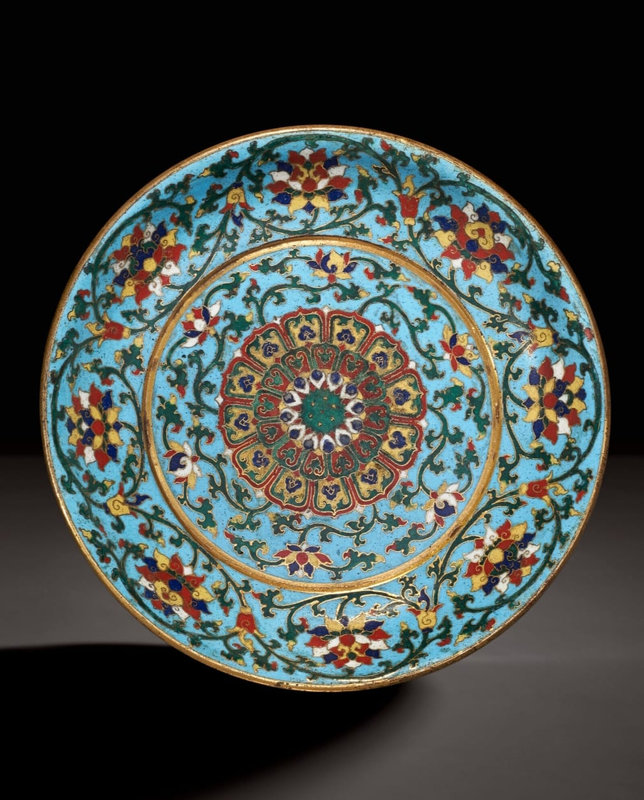 With shallow rounded sides rising from a straight foot to a slightly flaring rim, the dish is finely decorated in the center with a lotus seedpod surrounded by double rings of petals and lotus scroll, with further lotus scroll in the well, all reserved on a turquoise ground.

Note: The Jingtai reign is the most celebrated period for Chinese cloisonné enamel, so much so that the term Jingtai lan (Jingtai blue) is often used to describe cloisonné enamel objects in China. In his book Tianfu guangji, the collector Sun Chengze (1596-1676) recorded that on the 4th, 14th and 24th of every month at the back of a building called the Neishi, located outside the Xuanwu Gate, rare and precious treasures made for the inner court were traded, “such as bronze wares of the Xuande era, porcelain wares of the Chenghua era, lacquer wares made by the Guoyanchang of the Yongle era, and the Jingtai cloisonné made by the Yuqian zuofang [the Imperial Workshop].” Such accounts confirm the high status Jingtai cloisonné enamel wares held at least by the late Ming-early Qing period.

The present dish is exceptional for its sturdy, heavily cast bronze body, the rich, well-preserved gilding, and the strong colors set within fine, accurately bent wires that delineate the contours of the designs. A Jingtai-marked cloisonné enamel dish of this design and of comparable size is illustrated by H. Brinker and A. Lutz, Chinese Cloisonne, The Pierre Uldry Collection, New York, 1989, pl. 10, where another dish of similar design, but of slightly smaller size (26 cm.) and bearing a double vajra mark, is illustrated pl. 14, where it is dated first half 15th century. Another Jingtai-marked example of comparable size was sold at Sotheby’s London, 14 July 1981. Smaller Jingtai-marked dishes of this design include the one sold in Gems of Chinese Art, The Speelman Collection, I, Sotheby’s Hong Kong, 3 April 2018, lot 3406 (19.6 cm.), and the dish sold at Christie’s New York, 3 June 1998, lot 44, and again at Christie’s London, 7 November 2006, lot 93 (19.5 cm.). robustly cast with shallow rounded sides rising from a straight foot to a flared rim, the interior decorated with a central medallion of a seeded pod encircled by two rows of radiating lotus lappets, enclosed amongst stylised leafy sprays of lotus, the interior well and exterior similarly decorated with large multi-coloured lotus blooms wreathed by leafy scrolls, all reserved against a turquoise ground, skirted around the foot with a classic scroll, the gilt base incised with a horizontal six-character reign mark.

Note: This classic design, with the lotus medallion at the centre, comprised of a lotus pod with articulated seeds and radiating petals, is found on several examples dating to the Xuande period. See a Xuande reign-marked disc originally in the collections of Stephen Winkworth and Sir Percival David, now in the Uldry collection at the Rietberg Museum, illustrated in Helmut Brinker and Albert Lutz, Chinese cloisonné: The Pierre Uldry Collection, London, 1989, pl. 1, along with several boxes featuring the same motif, ibid, pls 2-4. A striking aspect of the present dish is the double-row of twelve radiating petals surrounding the pod. A comparable example with incised Jingtai six-character mark was sold in our London rooms, 14th July 1981, lot 12. A slightly larger dish, diameter 26 cm, sold in our London rooms, 29th October 1982, lot 14, is now in the Uldry collection, illustrated in Brinker and Lutz, ibid, pl. 14, with very similar decoration and a double-vajra incised to the gilded underside. Compare also another Jingtai-marked dish, first sold at Christie’s New York, 3rd June 1988, lot 44, and most recently at Christie’s London, 7th November 2006, lot 2682.

There has been speculation in the past that Jingtai reign-marked wares of the quality of the current dish, stylistically identical to Xuande wares, are in fact of the Xuande period but with later incised marks. Cloisonné enamel wares with apocryphal Jingtai marks are also frequently found, especially from the Qianlong period, when Imperial records detail the specific order to inscribe vessels with Jingtai marks. The centre with a formal lotus medallion surrounded by a border of flowering leafy stems and a band of scrolling lotus around the well, the motifs in red, white, yellow, blue and pale green against a turquoise ground of even craquelure, the reverse with a similar lotus scroll.

Note: The design of the lotus-seed pod on the current dish appears to be a popular motif in the enamellers' repertoire of this period. A ritual disc with a Xuande mark, from the collection of Sir Percival and Lady David, bears this design as the main decorative motif and shares the same colour scheme with the medallion on the present lot. The disc is illustrated by H. Garner, Chinese and Japanese Cloisonné Enamels, London, 1962, pl. 10A. Compare also the medallion on a Jingtai-marked dish from the early 15th century, illustrated by H. Brinker and A. Lutz, op. cit., pl. 10 and 10a.

The lotus-pod also appears to be a popular ceramic decorative motif of the early Ming period, cf. decorating the interior medallion of an underglaze-blue dish on a Xuande-marked dish, illustrated in A Panorama of Ceramics in the Collection of the National Palace Museum, Hsuan-te Ware I, p. 116, no. 28; and the interior of an underglazed-blue bowl illustrated in Imperial Porcelain of the Yongle and Xuande Periods, Excavated from the Site of the Ming Imperial Factory at Jingdezhen, Hong Kong, 1989, no. 42.

Compare also the typical pointed floral and foliage petals rendered on cloisonné ware of the early 15th century, such as the bowl dated to Yongle/Xuande period, sold at Christie's Hong Kong , 2 November 1999, lot 798, and the bottle vase in the British Museum, included in the exhibition, Riben-Zhongguo Meishu Mingpin Zhan, Tokyo National Museum, 1987, and illustrated in the Catalogue, p. 158, no. 121.

A similar lotus medallion formed as a lotus pod encircled by two bands of petal lappets can be seen on the cover of a Jingtai-marked cloisonné enamel bracket-lobed box in the National Palace Museum, Taipei, illustrated in Enamel Ware in the Ming and Ch’ing Dynasties, National Palace Museum, 1999, p. 66, no. 1, as well as on the famous cloisonné enamel Jingtai-marked box and cover, formerly in the collection of T. B. Kitson, sold at Christie’s Hong Kong, 3 December 2021, lot 2957. 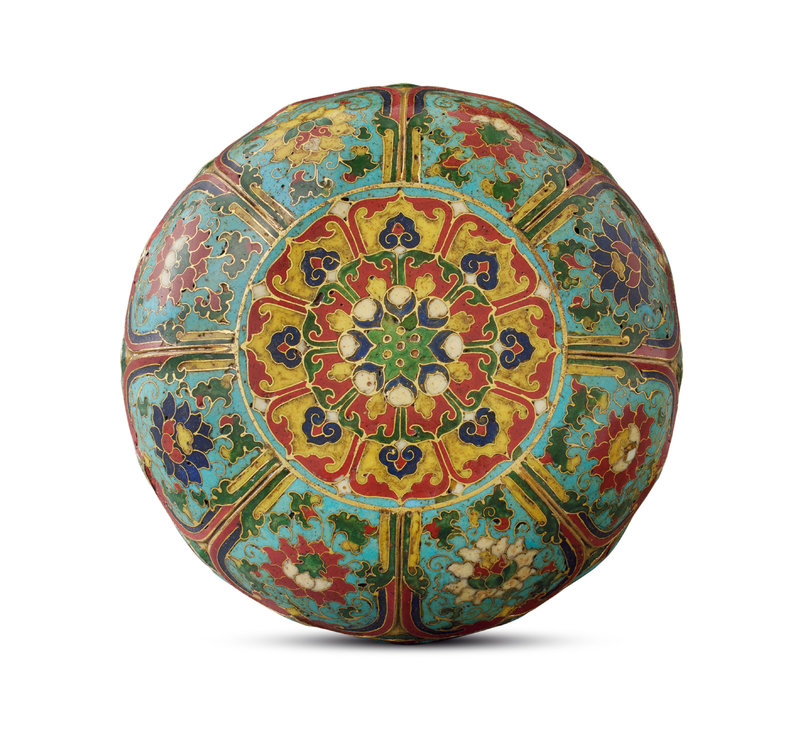 Commentaires sur A superb and extremely rare cloisonné enamel dish, Jingtai incised six-character mark in a line and of the period (1450-1456)