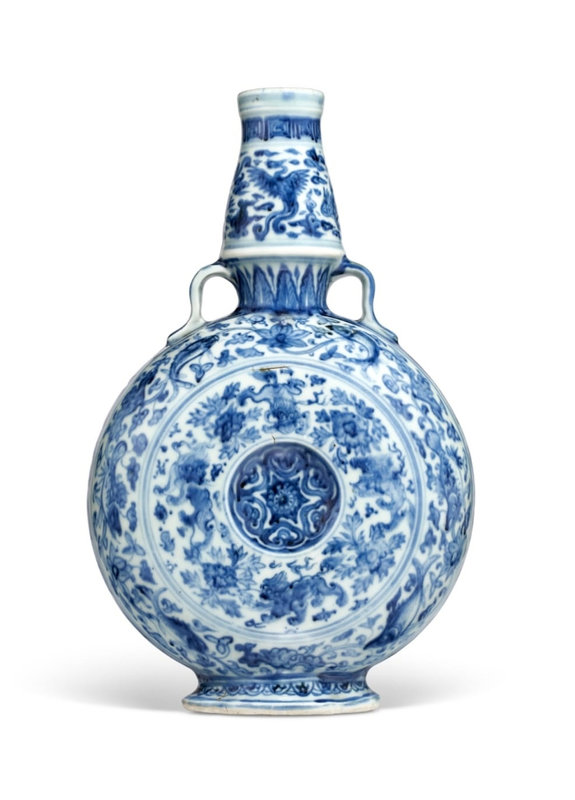 The flattened spherical body is raised on a quatrefoil foot and is decorated on each side with a central recess enclosing a ruyi-form flower head surrounded by lions interspersed with floral branches, all within a line border and an outer field of lotus and fish scroll. Loop handles flank the waisted lower section of the neck, which is encircled by upright leaves below the tapering upper section decorated with flying phoenixes amidst clouds.

Note: What makes this bianhu, and others like it, so unusual is the addition of a tall, tapering upper neck to a conventional moon-flask shape. A similar, but incomplete, flask of this unusual shape is illustrated by R. Krahl and J. Ayers in Chinese Ceramics in the Topkapi Saray Museum, Istanbul, vol. II, Yuan and Ming Dynasty Porcelains, London, 1986, p. 543, no. 657, where one can see that the foot and top of the neck are missing. The decoration is not identical, but is similarly arranged, and the painting style is very similar. This is also true of a complete example illustrated by J. A. Pope in Chinese Porcelains from the Ardebil Shrine, Freer Gallery of Art, Washington, 1956, pl. 69, no. 29.459. On the Ardebil Shrine flask, the decoration on the neck is identical to that seen on the present vase, but the Ardebil example has two bosses that protrude from the narrow sides of the body. This flask is also illustrated by T. Misugi, Chinese Porcelain Collections in the Near East, Topkapi and Ardebil, vol. 3, The Ardebil Shrine Collection, Hong Kong, 1981 rev. ed., p. 178, A. 101, where two other flasks of this type and also illustrated, both missing the upper section of the neck, and both without bosses. Another incomplete moon flask of similar shape is illustrated by J. Harrison-Hall in Ming Ceramics in the British Museum, London, 2001, pp. 179-80, no. 7:5, which is missing most of the upper neck. It, too, has a quatrefoil foot and a recessed medallion on each side, but like the flask in the Ardebil Shrine, it has raised bosses on the narrow sides. The author relates this shape to Islamic metalwork prototypes. Based on the published examples, none of the flasks of this type appear to share the same decoration on the body. The decoration is, however, always densely arranged and painted in a dark cobalt blue, which according to Harrison-Hall is typical of Hongzhi-period wares of this type.

A very similar moon-flask but decorated with tall petal lappets on the upper neck instead of phoenixes, was sold at Christie’s New York, 22 March 2019, lot 1630.