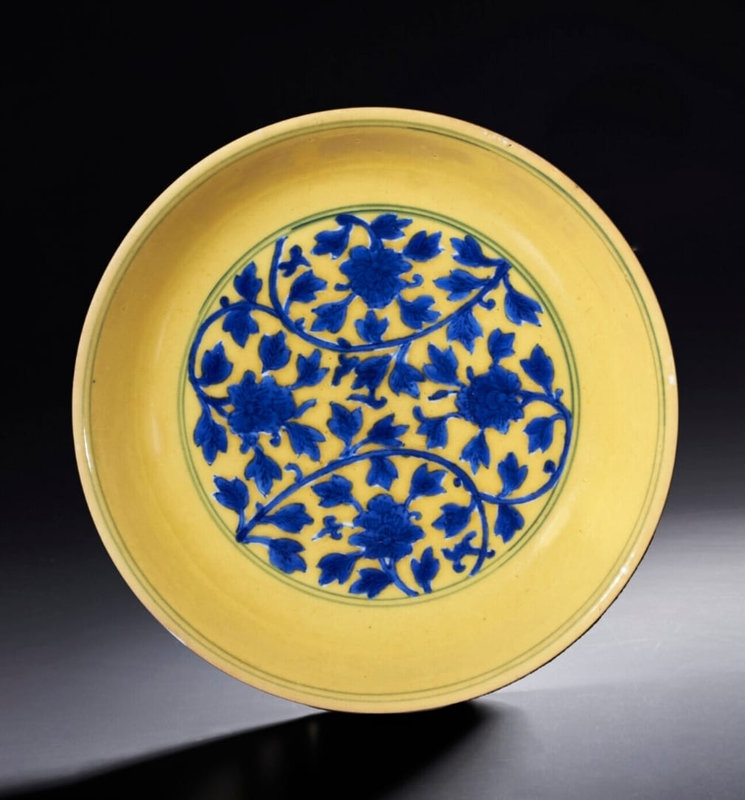 The shallow dish is decorated on the interior with four peony blossoms borne on two leafy, scrolling stems within a double circle, and on the exterior with further peony scroll, all on a rich egg-yolk yellow ground.

Note: Yellow-ground blue and white wares first appeared in the early Ming period, and became increasingly popular during the 15th and 16th centuries. Floral motifs were particularly popular designs for this color combination. However, the present dish, with its elegant meandering peony decoration on a yellow ground, appears to be a rare example of its type. A blue and white dish of nearly identical size and with a similar floral scroll design, also from the Jiajing period, is in the Nanjing Museum, and illustrated in Ming: The Golden Empire, Edinburgh, 2014, p.29, no. 33. It is noted that the Nanjing dish was a product of the imperial factory and intended for daily use in the imperial palaces. See, also, a blue and white Wanli mark-and-period example, decorated with a virtually identical peony pattern, in the Capital Museum China in Beijing, illustrated by Ma Guixi in Beauty of Ceramics: Blue & White Porcelain, p.99, no. 85. A yellow-ground blue and white-decorated dish with a similar floral design, Wanli mark-and-period, was sold at Christie’s New York, 19 September 2006, lot 244.

The choice of botanical motifs on these dishes was not random. The elegant meandering peonies motif decorating the center is known as Fugui wandai (May wealth and rank extend for ten thousand generations). According to T. T. Bartholomew in Hidden Meanings in Chinese Art, Asian Art Museum of San Francisco, 2006, p. 155, meandering vines represent continuity and are a pun for “ten thousand” (wan), as in “ten thousand ceaseless generations” (wandai). The combination of the meandering vine with peonies, which symbolize wealth because of the numerous petals, expresses the wish for prosperity.