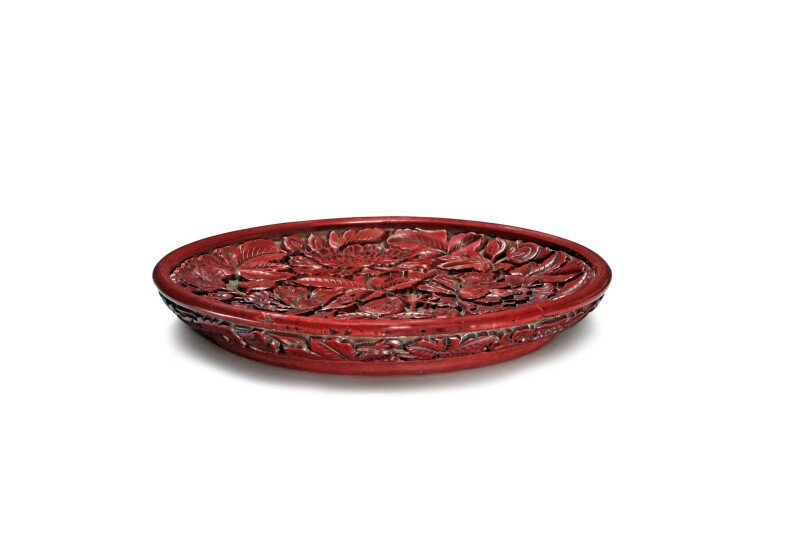 This large and exquisitely carved cinnabar lacquer dish appears to be unique, although stylistically it can clearly be placed into the peak period of Chinese lacquer craftsmanship, in the late Yuan (1279-1368) to early Ming dynasty (1368-1644). No other dish with this design appears to be recorded.

The carving style is remarkable for its boldness, its clear layout, for the overall soft, well-polished finish, and for the smooth, rounded outlines of the various elements of the flowers. Given the ample size of the dish, the decoration is unusual in being limited to three blooms among foliage, a design scheme more typically seen on much smaller dishes and boxes (around 18 cm in diameter); it allowed the flowers to be rendered in magnificent large scale.

Hibiscus, with its lush, frilly-petalled blooms, is a particularly lovely flower, popular in China but surprisingly rarely depicted in Chinese art. As a flower of autumn it is sometimes included in seasonal flower groups, for example, together with crab apple, gardenia and prunus, it appears in an anonymous Southern Song (1127-1279) set of four paintings in the Palace Museum, Beijing, included in the exhibition Wan zi qian hong. Zhongguo gudai huamu ticai wenwu tezhan [Ten thousand shades of purple, one thousand reds. Special exhibition of ancient Chinese cultural relics with flower and tree themes], Beijing, 2019, vol. 1, pl. 60. On the dish from the Wou Collection, the depiction of the hibiscus flowers includes a charming naturalistic detail hardly otherwise ever captured in artistic renderings of the motif: all three blooms show a tiny five-pointed ‘floret’ protruding from among the petal tips, representing the stigma that receives the pollen in the centre of the bloom.

The hibiscus is considered auspicious since its name furong is homonymous with ‘wealth (fu) and honor (rong)’. Where it appears on Chinese works of art, it is often mistaken for the peony. While its lush multi-petalled blooms can look rather similar to those of the peony, its leaves are clearly distinguished in Chinese representations: the peony has elongated serrated leaves with a central midrib on a short stalk (petiole), hibiscus leaves are depicted as five-pointed ‘hands’ with star-like ribs.

The carving style of this dish is characterized by the relatively wide spacing of the motifs, which are clearly separated from each other, revealing much of the contrasting yellow ground between, and the distinct detachment of the flower pattern inside from the grooved rim, and outside from rim and foot. These features are characteristic of Yuan pieces, such as for example the well-known small gardenia dish signed by the Yuan lacquer craftsman Zhang Cheng, from the Qing Court Collection and still in the Palace Museum, Beijing, one of the few pieces universally and consistently attributed to this master’s hand, see Zhongguo qiqi quanji [Complete series on Chinese lacquer], Fuzhou, 1993-8, vol. 4, pl. 159; and The Complete Collection of Treasures of the Palace Museum. Lacquer Wares of the Yuan and Ming Dynasties, Hong Kong, 2006, pl. 3 (fig. 1) More characteristic of Yuan pieces, however, is a groove around the rim band and a design of formal scrollwork on the outside. Two smaller dishes carved in a very similar powerful style with peonies with three main blooms among foliage, but with a grooved rim and scroll pattern on the outside, are illustrated in Hai-wai yi-chen/Chinese Art in Overseas Collections. Lacquerware, Taipei, 1987, pl. 56, from the Cleveland Museum of Art (fig. 2), and in Julia M. White, Masterpieces of Chinese Lacquer from the Mike Healy Collection, Honolulu Academy of Arts, Honolulu, 2005, no. 17 and p. 12, fig. 2. In the early Ming dynasty, flower designs carved on the inside were generally repeated on the outer sides, as on this dish. In the early 15th century, however, the hibiscus pattern was already rendered rather differently. It appears, for example, on the cover of a smaller cinnabar lacquer box (21.8 cm) in the Palace Museum, Beijing, from the Qing court collection, The Complete Collection of Treasures, op.cit., pl. 30 (fig. 3), and on two larger dishes (around 32 cm), in the National Museum of Denmark, Copenhagen, published in Sir Harry Garner, Chinese Lacquer, London, 1979, pl. 34a; and in the Nezu Museum, Tokyo, a famous piece, illustrated, for example, in Tōyō no shikkōgei/Oriental Lacquer Arts, Tokyo National Museum, Tokyo, 1977, no. 509; in Chōshitsu/Carved Lacquer, The Tokugawa Art Museum and Nezu Institute of Fine Arts, Nagoya and Tokyo, 1984, pl. 82; and in Hai-wai yi-chen, op.cit., col. pl. 94. All three pieces are superbly carved with five large hibiscus blooms among buds and leaves, the box bears a Yongle (1403-1424) and superimposed Xuande (1426-1435) reign mark, and has been attributed to the Yongle period, the Nezu dish shows a needle-engraved Yongle reign mark.

Although the three designs show differences and seem to be the work of different hands, they are much closer to each other than to our dish: the carving style is much more finely detailed and thus lacking the bold impact conveyed by the present example; the blooms and leaves are much more tightly spaced, revealing little of the yellow ground underneath, and the design is almost touching the rim – all suggesting a slightly later date for these three hibiscus-decorated pieces than for our dish.

Little is known about lacquer workshops in the Hongwu period (1368-1398), even though the Gegu yaolun [The Essential Criteria of Antiquities], which was composed by Cao Zhao in the Hongwu reign, in 1388, devotes a complete section to this medium. Although Zhang Cheng is regarded as a Yuan dynasty craftsman, he most likely lived well into the Hongwu and perhaps even the Yongle period. The local gazetteer of Jiaxing of 1685 states that when the Yongle Emperor heard of his work, he summoned him to the court, but by that time Zhang Cheng had already died. His son Zhang Degang, who had followed him in business, thus answered the call to the capital in place of his father. He was made Vice Director of the Yingshansuo, an office that formed part of the Ministry of Works (Gongbu), and eventually became head of the newly established imperial lacquer factory in Beijing, thus probably assuring a certain continuation of style. Because of its laborious manufacturing process, carved lacquer ware does not lend itself to series production, but is dependent on the ability of individual craftsmen. Thus, the distinction between different periods of production is less clear-cut with lacquer wares than with ceramics.

The existence of a high-class production of imperial quality in the Hongwu reign is suggested also by a Ming document recording gifts from the court of the Yongle Emperor to the Ashikaga Shogun of Japan, starting right in the first year of the Yongle reign, 1403, with a highly important gift of fifty-eight well-described pieces (see Lee King-tsi and Hu Shih-chang in Layered Beauty. The Baoyizhai Collection of Chinese Lacquer, Art Museum, Institute of Chinese Studies, Hong Kong, 2010, pp. 171-190, English, and pp. 215-232, Chinese). Given the time-consuming process of building up a thick layer of lacquer by adding multiple thin coatings, each of which needs to dry before it can be polished and the next one applied, and finally carving the design into it – a process that can take years – it is considered improbable that those pieces could have been completed within the first year of the reign, or in the unruly times of the short Jianwen period (1399-1402), and almost certain that they must have been made in the Hongwu reign.

Another cinnabar lacquer dish of this rare size (27 cm), carved with a large-scale lily design with three main blooms, with grooved rim, but with flowers also on the outside, also with a Zhang Cheng inscription on the base, is in the Shoju-raigo-ji, a temple in Otsu, Shiga Prefecture, illustrated in Hai-wai yi-chen, op.cit., col. pl. 54 and in Chōshitsu, op.cit., no. 75. Equally showing stylistic features that clearly predate the Yongle period and characteristics reminiscent of Yuan lacquer ware, it relates closely to the present dish.